Please excuse the mess while this website undergoes construction. Once complete, this site will serve as the primary information & legal repository regarding a civil rights lawsuit stemming from a long history of collusion, harassment and illegal traffic stops involving CBP (“Customs & Border Protection”) and the PCSD (“Pima County Sheriff Dept”).

The most recent incident giving rise to the current legal action took place in Southern Arizona during the afternoon of April 10, 2017. While being detained in the lane of traffic at a CBP/DHS roadblock by Agent Taylor Frye (#T739) absent probable cause or reasonable suspicion, PCSD Deputy Ryan Roher (#5347) approached, assumed control over the roadblock stop and ultimately arrested Checkpoint USA (“CPUSA”). In an attempt to justify the arrest, Deputy Roher (“Roher”) cited CPUSA for contempt of cop masquerading as a highway obstruction charge based on the ~144 seconds CPUSA was detained in the lane of traffic in front of two stop signs against his will while exercising his right to remain silent: 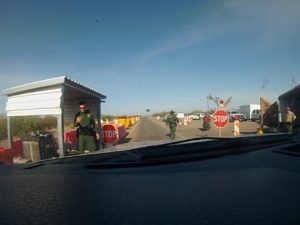 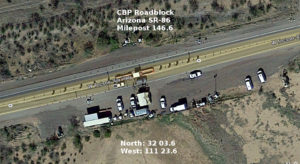 SR-86 is an East-West highway over forty miles North of the international border with Mexico that never intersects the border at any point. As such, the majority of traffic along the highway is domestic in nature, not border.

After approaching the roadblock from the west, CPUSA was forced to stop in the lane of traffic in front of two stop signs by CBP Agent Taylor Frye (“Frye”) who interrogated him for approximately 80 seconds. During that time frame, Roher approached, took control of the federal roadblock stop away from Frye 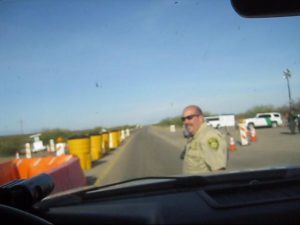 and detained CPUSA for an additional 64 seconds before allowing him to leave. 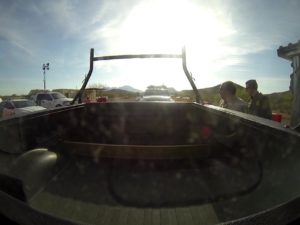 Roher, who had no lawful authority to enforce federal immigration law or actively participate in federal immigration checkpoint operations, was providing a general law enforcement presence at the roadblock under a federal grant program known as Operation Stonegarden (more on Operation Stonegarden here). On the day in question, Roher was being paid $75.07 per hour to be at the beck and call of his handlers in the U.S. Border Patrol. By the time his 8 hour shift was complete,  Roher had made over $600.00 in overtime from federal Stonegarden grant funds.

During his 8 hour shift, Roher not only saved the people of Pima County from CPUSA getting home from work on time but also dealt a serious blow to drivers with cracked windshields and gave a stern warning to another driver anonymously accused of speeding in the vicinity of the roadblock. Indeed, according to Deputy Roher’s own testimony, he is a prolific writer of general law enforcement citations at federal roadblocks such as this one with his personal best being over 30 citations in a single Stonegarden deployment. After all, what is a limited scope federal immigration checkpoint all about if not to give local deputies an opportunity to use federal  checkpoints as a pretext to harass drivers with broken windshields,  anonymous speeding complaints and ‘bad attitudes’ while holding their hands out to the federal government for time and a half:

Getting back to the incident at hand, the story didn’t end with CPUSA being allowed to leave the roadblock. After releasing him without seeking consent from the CBP agent in charge, Roher followed CPUSA down the road, conducted a traffic stop on the outskirts of the roadblock, ordered CPUSA out of the vehicle & proceeded to handcuff and arrest him. During this time frame, several CBP agents from the roadblock arrived onscene and assisted Roher with the traffic stop & arrest.

The formal charge? At first Roher either couldn’t or wouldn’t respond to multiple queries regarding why he had detained/arrested CPUSA. Eventually however, Roher came up with a state highway obstruction charge, see ARS 13-2906(A), based on the 2+ minutes CPUSA had been detained in the lane of traffic against his will at a federal roadblock operating under a state encroachment permit in front of two stop signs by an armed Customs & Border Protection agent and a Pima County Sheriff deputy.

This despite the fact that deputies from previous encounters at this roadblock had determined they had no authority to cite CPUSA for obstructing the highway under similar circumstances:

CPUSA is currently in the midst of defending against the trumped-up highway obstruction charge along with preparing a civil rights lawsuit against the responsible parties. As this website is developed further, pertinent legal documentation & media will be added along with updates & commentary.

For an overview regarding what to expect on the civil rights front, a link to the Notice of Claim, that has been served on the state actors associated with the incident, has been provided. Additionally, a Federal Tort Claim has been submitted against U.S. Customs & Border Protection in the Tucson sector.

If all this sounds familiar, that’s because it is. Checkpoint USA has been documenting his 400+ experiences at this roadblock since early January of 2008 along with similar roadblocks conducted along the same stretch of highway dating back as far as 2002.

CPUSA is well known by the CBP agents that operate this roadblock along with their enablers in the Pima County Sheriff’s Dept. Indeed, the deputy who arrested CPUSA on April 2017 was kind enough to admit to knowing who CPUSA was along with being familiar with his website and videos:

Defending against trumped up charges and trying to hold government agents accountable for their actions is an expensive endeavour. Please consider spreading the word regarding these types of abuses and/or donating to assist with legal expenses.

Thank you for your time and consideration.