Skip to content
In a 3 to 2 vote earlier this month, the Pima County Board of Supervisors opted to reject $1.4 million dollars in federal funds associated with the Operation Stonegarden grant program for the first time since the Pima County Sheriff’s Dept. began participating in the program sometime around 2012-2013:

Given that the Pima County Sheriff’s Dept. was recently served with a Notice of Claim by CPUSA for a Stonegarden incident that took place last year, I was encouraged by the board’s actions. Unfortunately, once the Pima County Sheriff’s Dept. became aware of the vote, the department quickly mobilized the PR machine & convinced district 2 supervisor Ramon Valadez to call for a revote at the next scheduled meeting on February 20, 2018.

The homeland security grant in question has been paying county deputies over the past five years to merc themselves out to the Department of Homeland Security and Customs & Border Protection. Under the terms of the grant, deputies get paid overtime to conduct zero tolerance patrols under the close supervision of the U.S. Border Patrol. Indeed, the watch commander for deputies conducting Stonegarden patrols is not a PCSD employee but rather a federal agent.

I first became aware of the Stonegarden program back in 2013 after having a run-in with a county deputy responding to a bogus Border Patrol call for assistance. A few months later, I observed a different deputy stationed at the roadblock assisting the Border Patrol and decided to ask a few questions regarding the nature of the operation:

Since then, I’ve been able to gather together more comprehensive information regarding the joint operation and provide links below to documents associated with the Pima County Sheriff Department’s involvement in it:

To provide a visual representation of the statistics linked to above, I tabulated the numbers and generated a graph below. Note – the numbers in each column are not mutually exclusive. For instance, misdemeanor arrests are usually accompanied by a citation as well which means misdemeanor arrest numbers are a subset of the citation numbers: 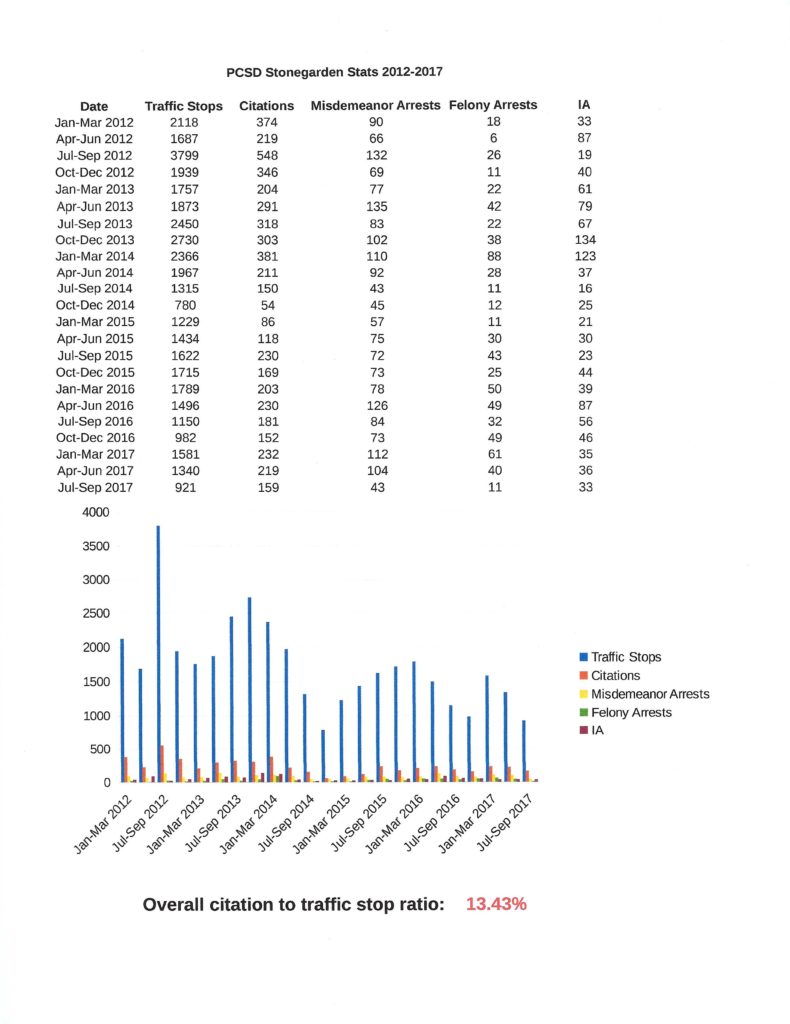 One of the most interesting numbers to fall out of the statistics above is the 13.4% citation to traffic stop ratio. By itself, the ratio doesn’t provide much context but when compared to citation to traffic stop ratios from other law enforcement agencies, a disturbing trend begins to emerge. Specifically, the average ratio of citations to traffic stops across the country is roughly 60%. This includes agencies such as the Tucson Police Department & the Maricopa County Sheriff’s Department. When the ratio is as low as it is under the PCSD Stonegarden program, that indicates serious problems with the legality of the PCSD traffic stops in general (lack of reasonable suspicion or probable cause) and the presence of racial profiling in particular.

When one considers the history of abuse associated with CBP roving patrol and checkpoint operations in Pima County, the problems associated with CBP exerting influence over PCSD deployments under Stonegarden become even more apparent. This in turn is exacerbated by the financial incentive deputies have to conduct operations the way their handlers in CBP want them to.

When the above analysis is combined with the fact that the PCSD does not offer any training to deputies conducting Stonegarden deployments – especially when those deployments are carefully choreographed by Customs and Border Protection, a real problem starts to become apparent:

To help illustrate just how closely the PCSD and CBP coordinate their enforcement activities under the program, I’ve embedded a pdf document created last year that addresses the issue:


In addition to the zero tolerance patrols conducted by deputies under this program, deputies have also been stationing themselves at CBP roadblocks in Pima County despite having no lawful authority to engage in limited scope federal immigration roadblock operations. The NOC CPUSA served on the PCSD in October of last year highlight many of the problems that have resulted from these joint roadblock operations.

Given all the problems associated with the Stonegarden program, the Board of Supervisor’s should reject funding for it. To continue funding the program knowing how it is being abused by CBP and the PCSD creates legal and financial liability for the county while calling into question every enforcement action that has been and will be taken under the program.

Federal immigration enforcement is the responsibility of the federal government. The Pima County sheriff’s department should go back to serving the people of Pima County instead of unelected special interests originating from Washington, D.C along with some deputies who like padding their paychecks by doing the bidding of the U.S. Border Patrol.

The agenda for the Pima County Board of Supervisors meeting on February 20, 2018 is available here. Contact information for members of the board appear below:

2 thoughts on “Board of Supervisors Consider Rejecting Stonegarden Grant”