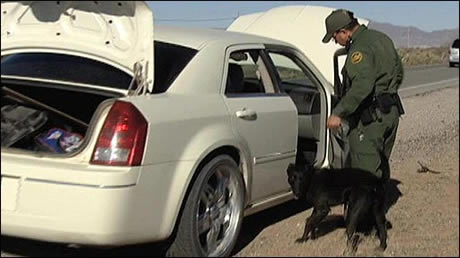 Over the past several years, Roadblock Revelations has published several articles regarding illegal enforcement action by roving patrols manned by armed Border Patrol agents operating no where near an international border. Some of these articles involved me directly – see:

While others did not:

Some have even involved Border Patrol agents or their family members as victims of other overzealous agents conducting illegal roving patrol operations:

Given so many examples of routine lawbreaking by Border Patrol agents not patrolling the border they’re paid to patrol, it was good to finally see some organizations dedicated to fighting unconstitutional government activity finally taking notice earlier this year.

In late April of 2012, the ACLU of Washington State and the Northwest Immigrant Rights Project teamed up to file a lawsuit against the United States Border Patrol for illegal CBP roving patrol practices in Washington State. The lawsuit highlights three individuals who have been repeatedly seized and interrogated by Border Patrol agents on roving patrol absent reasonable suspicion to believe they were unlawfully in the United States. Two of the individuals are correctional officers and the other is an 18 year old high school student. All three are United States citizens.

The lawsuit seeks a declaration that the Border Patrol has violated the plaintiff’s rights & exceeded Customs And Border Protection’s statutory authority. The lawsuit also seeks an injunction against further vehicle stops absent reasonable suspicion & until such time as all Blaine sector Border Patrol agents have received adequate training regarding reasonable suspicion and the agency institutes a policy of documenting the reason for all vehicle stops, not just those resulting in an arrest.

It should be noted that Border Patrol behavior and policies noted in the lawsuit complaint routinely take place in all Border Patrol sectors. It just so happens that the level of Border Patrol activity in the Blaine sector is relatively recent and Washington State’s Olympic Peninsula residents haven’t been conditioned to it for decades like residents of the Southwest and are far less willing to put up with it.

Links to articles highlighting the recent lawsuit appear below:

FYI: The video appearing below was from a roving patrol stop I was subjected to late at night along a deserted stretch of desert highway in May of 2008:

14MAY2008RovingPatrolStop from Checkpoint USA on Vimeo.