In conjunction with the Tohono O’odham Police Department, the Drug Enforcement Agency recently installed a camera surveillance system along the West bound lane of traffic near mile marker 146 on SR86 in Southern Arizona. The location is just West of the Border Patrol checkpoint I’ve highlighted extensively on this blog.

GPS coordinates for both the camera surveillance system and the Border Patrol checkpoint are as follows:

The camera array consists of six video cameras setup at various angles, heights & locations for recording the outside & inside of vehicles passing by, including images of the driver & any passengers who may be present: 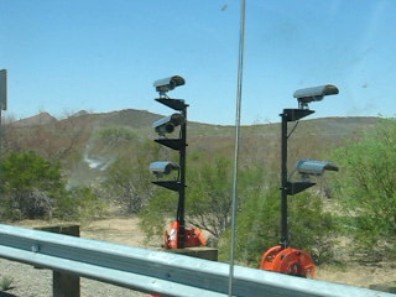 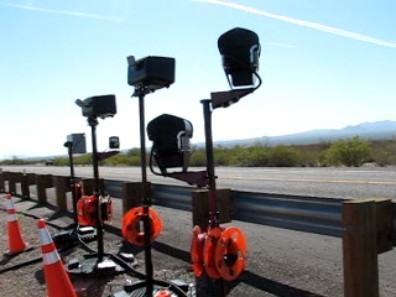 While I haven’t been through at night yet, I can only assume the halogen lights are there to light up the inside and outside of vehicles by turning on once they are close enough for the cameras to kick in. This will allow the cameras to get good video of vehicle occupants along with distinguishing markings of the exterior of vehicles. It probably doesn’t do much for public safety however by having high intensity lights suddenly switch on without warning in your face while driving along a stretch of desert highway late at night.

Lest someone make the claim the cameras are only for recording license plate numbers, the labels on the back of the six video cameras (not including two dedicated license plate readers) indicate they’ve been setup for recording video of drivers and passengers in both privately owned and commercial vehicles.

In addition to the cameras mentioned above, there are also two ELSAG AD3-FG automated license plate readers capable of recording the license plate of every vehicle passing by in both directions: 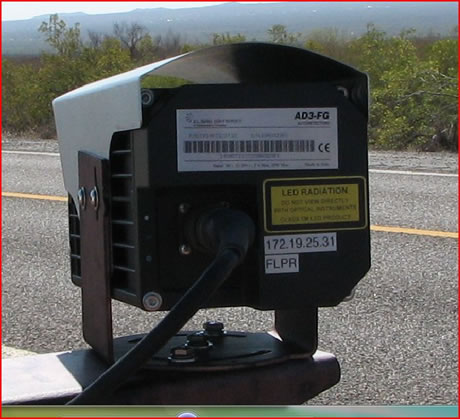 The license plate numbers collected by the ELSAG cameras are used to cross-reference information regarding vehicle owners & operators and save personally identifiable information about such individuals to a database for federal, state & local intelligence gathering purposes along with real-time enforcement operations. This information is undoubtedly saved with the video taken by the other six cameras for each vehicle that passes by: 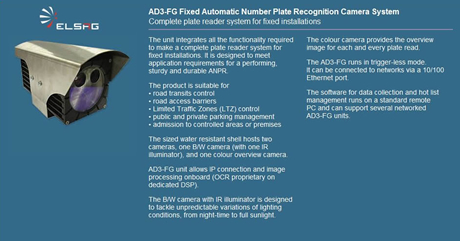 An article in The Runner, a Tohono O’odham Nation publication, provides some additional information about the camera array and how it is being used by the TOPD. It also indicates this camera array is just one of several being setup along public roads in the area: 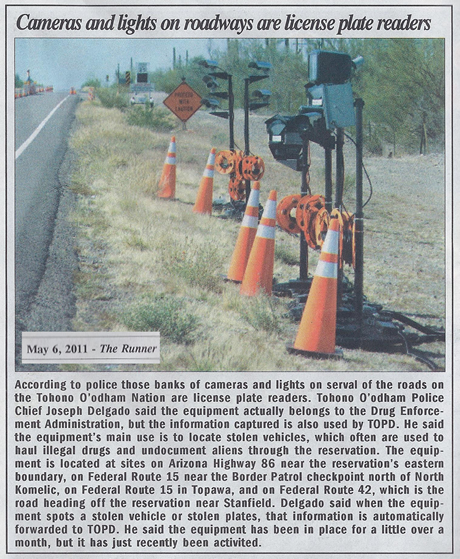 The images, video and data collected appear to be processed on-site in an unmarked trailer with a DOJ license plate. The DEA is part of the DOJ: 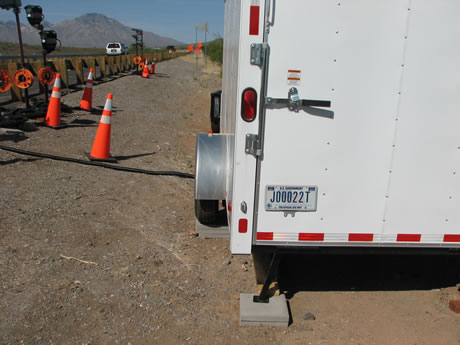 The entire operation is powered by an on-site gasoline generator with a large fuel resevoir: 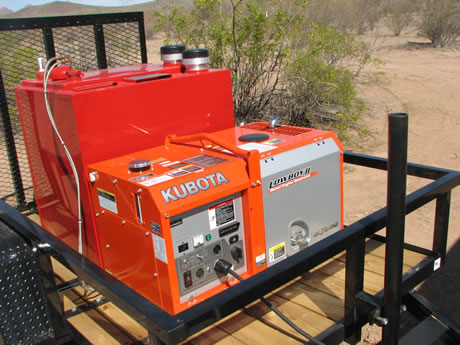 You can be sure the Tohono O’odham Nation did not pay for these camera systems. As the article above indicates, the DEA owns this equipment & undoubtedly struck a deal with the TOPD to share information with them in exchange for allowing them to be setup in the area. It also wouldn’t be surprising to learn if access to federal grant money wasn’t also part of the deal.

Regardless, it’s fairly clear, given the TOPD’s history, the department’s primary job isn’t to serve & protect the people of the Tohono O’odham Nation but rather to serve their federal handlers in the BIA, DHS and now, it would appear, the DEA.

In addition to the Department of Justice’s DEA and the Tohono O’odham Nation’s TOPD, the U.S. Border Patrol under the Department of Homeland Security also appear to be involved by using the nearby ‘immigration’ checkpoint and the Three Points Border Patrol substation as a staging area for real time enforcement operations on behalf of the DEA and TOPD. Border Patrol agents are, after all, cross-certified by the DEA to enforce federal drug laws & drug dogs are almost always on hand at these checkpoints. The logistical support that a nearby ‘immigration’ checkpoint and substation provides would be too much for the DEA to pass up.

Folks should make no mistake about it. This surveillance system isn’t about catching drivers with expired tags or going over the speed limit although I’m sure they’ll be happy to collect fines for such low level traffic violations at some point. This is a system designed for wholesale public surveillance with long-reaching goals by local, state and federal agencies absent any individualized reasonable suspicion whatsoever. You don’t need to record and store video of passengers in vehicles in order to cite a vehicle owner for an expired tag & federal homeland security and drug agents aren’t there for local traffic control.

As I’ve noted many times before, all this surveillance & enforcement activity is taking place well inside the country no where near an international border. It targets anyone who happens to be in the area absent any individualized suspicion whatsoever. Local residents and commuters are of course the hardest hit by this daily intrusion in their lives by indiscriminate federal policies and agents with little respect for individual rights or privacy.

Welcome to Checkpoint USA – where you’re a suspect merely for being alive. 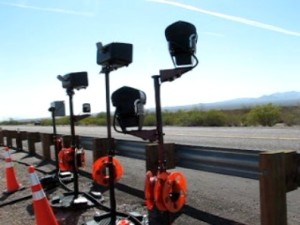 One thought on “DEA, DHS & TOPD Surveillance Along AZ SR86”