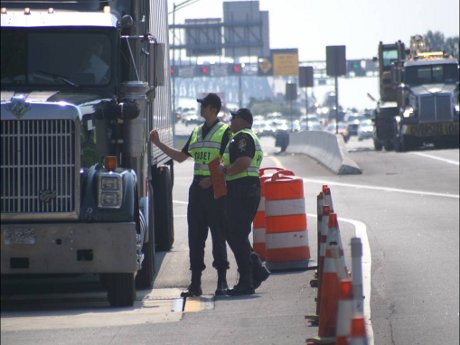 Several months ago, I was forwarded information regarding a 4th amendment lawsuit relating to commercial trucking that’s pertinent to many of the issues I discuss on this blog. What I found especially interesting about the case was that despite commercial trucking being a heavily regulated industry where there’s a much lower expectation of privacy along with 4th & 5th amendment protections (according to the courts anyway), a federal judge nonetheless ruled in favor of a commercial truck driver subjected to a standardless inspection regime during a mandatory roadside weigh station stop.

The case at issue involved a checkpoint operation by the Minnesota State Patrol in May of 2008. Inspectors for the patrol were conducting a fishing expedition for impaired drivers and had prepared a “survey” for truck drivers stopped at the weigh station. While administering the “survey”, inspectors not only failed to inform drivers what its purpose was but actively mislead them in the process. Additionally, the “survey” was comprised of intrusive questions having little to do with determining a driver’s current impairment level. Questions such as:

After “voluntarily” filling out one of the “surveys”, Stephen House, the driver who eventually brought suit against the Minnesota State Patrol in conjunction with the Independent Driver Association, was determined by the inspectors to be “impaired” and forced off the road for a period of 12 hours based on his answers to “survey” questions.

House brought suit against the Minnesota State Patrol and on January 28, 2011, the case was decided in the United States District Court in the District of Minnesota. Plaintiff’s Stephen House and the Independent Driver Association were victorious. In the decision, the district court ruled that inspectors with the Commercial Vehicle Enforcement Section of the Minnesota State Patrol overstepped their authority and violated the plaintiff’s right to be secure from unreasonable search and seizure when they impermissibly expanded the scope of their questioning and detention during the inspection absent reasonable suspicion to believe the driver was in violation of any regulations they were authorized to enforce.

The court also ruled inspectors were purposefully misleading regarding the purpose of the questions, rules in place governing inspections at the time were inadequate to limit their lawful discretion, truck drivers had no notice of the purpose of the detention, the scope of the questions or their purpose, and there were inadequate remedies in place to administratively challenge the results of the inspection after the fact.

If you’ve been following my blog for any length of time, a lot of the specifics addressed by the court should sound familiar because in one form or another I’ve brought them up in relation to the checkpoints I cover on several occasions. Indeed, several of the issues the court ruled in favor of the plaintiff for are front and center in both the way the Border Patrol conducts their internal “immigration” checkpoints along public highways inside the country and in my own ongoing checkpoint lawsuit.

Without belabouring the point further, I’ve included several pertinent quotes from the court case below. Note – since the events resulting in the lawsuit, guidelines have finally been adopted by the Minnesota State Patrol and those guidelines make it clear drivers ARE NOT REQUIRED to answer questions from inspectors. Does anyone really think that if a commercial truck driver can’t be required to answer questions from safety inspectors in a highly regulated industry while being detained at a weigh station that Border Patrol agents can compel individuals to answer questions while seizing domestic traffic absent individualized suspicion at internal immigration checkpoints?:

The Minnesota State Patrol issued General Order 10-25-002 (Determination of Commercial Vehicle Impairment Due to Illness and/or Fatigue and Related Enforcement) on May 5, 2010, and updated the Order on August 24, 2010. The General Order makes several changes to clarify, in part, the limitations and restrictions of CVIs and Troopers who conduct NAST inspections when impairment due to fatigue, illness, or
other causes is at issue. First, during a NAST inspection, Troopers and CVIs are to observe drivers for signs of impairment due to illness, fatigue, or other cause, but they cannot expand the driver portion of the inspection to determine impairment unless they have a reasonable articulable suspicion that the driver may be impaired. Second, the questions used to determine impairment must be reasonably related to whether the driver can safely operate the vehicle at the time. Untruthful or misleading statements to the driver are no longer permitted. Drivers are to be told the purpose of the questions if they inquire, and they are not required to answer questions….Notably, none of these procedures, limitations, or restrictions were in place on May 10, 2008.

…2. Although Defendants were authorized to temporarily detain House on May 10, 2008, for a routine Level III Inspection, Defendants were not entitled to conduct the scope of investigation and questioning that they did. In doing so, Defendants continued the detention of House beyond what was reasonably related to the circumstances that justified Houses detention at the beginning of the weigh station stop. Defendants did not have a reasonable articulable suspicion that House was impaired, and the continued duration of the detention as well as the broad scope of questions by the Defendants constituted a seizure in violation of Houses Fourth Amendment right against an unreasonable seizure

4. The regulatory program in place on May 10, 2008, did not properly and adequately limit the inspecting officers discretion.

5. The continued detention of House and the scope of the inquiry of House on May 10, 2008, was beyond the scope of a proper Level III Inspection, which therefore violated Houses Fourth Amendment right to be free from an unreasonable seizure.

6. Consequently, the decision to issue the OOS Order was arbitrary and not based upon a reasonable particularized suspicion, as is now required by General Orders of the Minnesota State Patrol that did not exist on May 10, 2008.

7. Plaintiffs are entitled to prospective injunctive and declaratory relief based upon the Courts conclusion that Houses Fourth Amendment right to be free from an unreasonable seizure was violated on May 10, 2008.

8. Plaintiffs, as prevailing parties with respect to Count IV of the Second Amended Complaint, are entitled to apply for an award of reasonable attorney fees and costs pursuant to 42 U.S.C. § 1988

Consequently, in the absence of a reasonable articulable suspicion, any limitations placed on the scope of the inquiry or inspection of House, or any notice of the procedures in place to evaluate whether drivers are too fatigued, ill, or impaired to drive safely, the duration of the detention and the scope of the inquiry constituted an unreasonable seizure in violation of Houses Fourth Amendment rights

House was not provided with a meaningful post-deprivation review of his OOS Order after the May 10, 2008 incident. Even though the DataQ process was in place at that time, there was no procedure in place to inform a driver in Houses situation of the review process. The Court has concluded that House did not suffer any damage, but the Court has ordered the expungement of his record

The Court has directed the parties to contact Magistrate Judge Leo I. Brisbois to establish a date for a settlement-mediation conference to discuss prospective injunctive and declaratory relief.