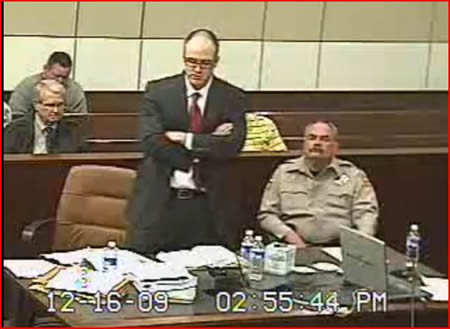 The full video from Steven Anderson’s pre-trial hearing on December 16, 2009 has been released and appears below. For those who haven’t been following this case, Steven Anderson is the individual tazered and beaten by Arizona DPS Officers and U.S. Border Patrol agents at an internal suspicionless checkpoint East of Yuma in April of last year.

Additional background information on this case, including shorter clips from the court hearing, can be found at:

The hearing video has been broken down into five segments. The first four are about one hour in length each while the last segment wraps things up with a run time of about eight minutes.

Even though the hearing is over four hours long, I recommend folks watch the videos in their entirety. If you haven’t experienced a court room setting before, this is a good intro on what to expect. Additionally, some of the testimony from Border Patrol agents in this particular hearing is priceless.

If folks want to skip over some of the procedural jousting that goes on at the start of the hearing, they can skip to about minute 37 or so of part one when the witnesses for the State are sworn in. The first 37 minutes are mainly the attorneys arguing over whether the judge has a conflict of interest in the case, the proper scope of the motion to suppress and whether video from Anderson’s camera should be played for the court.

I’ll be dissecting and commenting on various parts of these videos in later posts but for this one I just wanted to make the videos available: