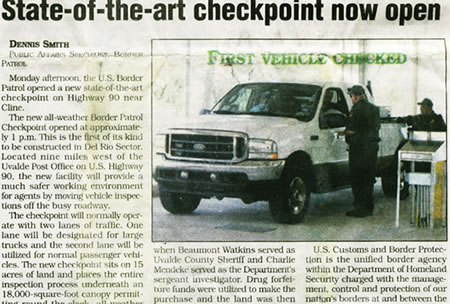 As a followup to my earlier post titled, Border Patrol Harass Military Field Grade Officer At Internal Checkpoint, additional video footage regarding the Uvalde Border Patrol checkpoint incident has been released. This footage appears below in four sections and shows the entirety of the checkpoint encounter.

What should be noted here and I can’t stress enough is that the U.S. Supreme Court has explicitly ruled that internal checkpoint seizures such as this one must be very limited in scope and very brief in the absence of consent or probable cause.

It should be clear from the video that the agents had neither consent nor probable cause to believe the driver was in violation of any immigration law enforced by U.S. Border Patrol agents. As such, the extended detention was most likely illegal. Additionally, the actions of the Border Patrol agents clearly rose to the level of harassment and intimidation. Especially after the agents contacted the driver’s military command regarding the encounter.

What you see happening in this video is one of the reasons I opt not to go to secondary during checkpoint encounters. Once an agent gets you in secondary, they have all day to mess with you. By staying in the lane of traffic, you force them to make a probable cause determination within a reasonable time frame. If they take action against you for not going to secondary when they don’t have probable cause (or even reasonable suspicion in most cases), you have a clear cut civil rights violation ripe for the courts to hear.

I’ve included several pertinent U.S. Supreme Court quotes below along with links back to the cases in question. The video segments from the checkpoint incident follow these quotes:

“It is agreed that checkpoint stops are ‘seizures’ within the meaning of the Fourth Amendment.” – U.S. v Martinez-Fuerte

“The Fourth Amendment applies to all seizures of the person, including seizures that involve only a brief detention short of traditional arrest.” – U.S. v. Brignoni-Ponce

“Our prior cases have limited significantly the reach of this congressional authorization, requiring probable cause for any vehicle search in the interior and reasonable suspicion for inquiry stops by roving patrols. Our holding today, approving routine stops for brief questioning is confined to permanent checkpoints. We understand, of course, that neither longstanding congressional authorization nor widely prevailing practice justifies a constitutional violation“ – U.S. v Martinez-Fuerte

The Fourth Amendment held to forbid Border Patrol officers, in the absence of consent or probable cause, to search private vehicles at traffic checkpoints removed from the border and its functional equivalents, and for this purpose there is no difference between a checkpoint and a roving patrol. – U.S. v Ortiz