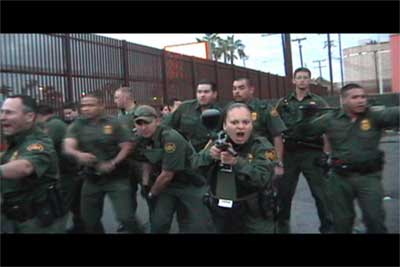 [Angry Border Patrol agents riot in the streets after charges against Anderson were dismissed with prejudice ;)]
07 May 2010 Update: Photo clarification appears below

Steven Anderson was beaten and tazered by U.S. Border Patrol agents and Arizona DPS officers at a suspicionless Homeland Security checkpoint East of Yuma in April of 2009. The reason for the beat down was because Mr. Anderson chose to peacefully exercise his right not to be searched absent probable cause and a warrant signed by a federal judge.

To add insult to injury, after beating Mr. Anderson, he was also charged by Arizona DPS officers with several violations of state law even though he had been seized at a federal checkpoint by federal agents allegedly enforcing federal law.

On December 16, 2009, Mr. Anderson was in Yuma, Arizona Justice Court attending a pre-trial hearing regarding those charges with his attorney Marc Victor. By the end of the day, Mr. Victor was successful in having the charges dismissed with prejudice.

Selected video clips from the hearing appear below followed by video footage of the checkpoint incident itself that lead to the charges. For those needing additional background information regarding this case, I provide links to previous coverage appearing on this blog:

As seen in the video clips below, there’s a lot of useful material to work with from the December 2009 court hearing. I intend to write about the content of these videos in greater detail as time permits but thought it was important to provide links to them now.

My thanks go out to Mr. Anderson for making these videos available on his YouTube website. I hope he intends on releasing the remainder of the court hearing video footage in the near future so we have an opportunity to view the proceedings from start to finish.

Clarification: I thought it was obvious but apparently not. The Border Patrol did not riot in the streets after the court dismissed all charges against Steven Anderson (at least to my knowledge). According to a reader, the picture appearing at the top of this entry originated from a video taken of Border Patrol agents attacking a group of peaceful protesters near the Calexico Port of Entry several years ago. My apologies for not making it more clear. The picture and caption were a poor attempt at injecting humor into an otherwise humorless incident