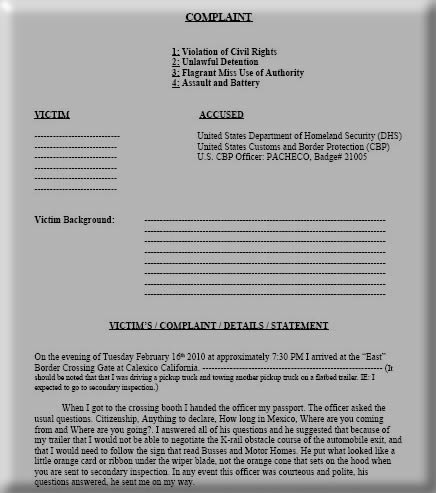 In December of last year, I reported on a story involving Canadian science fiction author Peter Watts. Mr. Watts was assaulted by overzealous Customs & Border Protection Officers along the Northern border while attempting to return to Canada.

In this article, I highlight a reported assault of a U.S. citizen by a Customs and Border Protection officer along the Southern border while attempting to return to his country through the Port of Entry in Calexico CA.

I received the email appearing below, along with a copy of the individual’s detailed complaint to the Department of Homeland Security, several weeks ago. The email and report speak for themselves.

I’ll just note that it shouldn’t surprise any of us that this sort of abuse by armed government agents is taking place. When the courts give federal agents Carte Blanche to ignore individual rights. as they do in many cases at the border, many agents will do just that or aid and abet their fellow agents by looking the other way…

I came across your page while researching what could possibly be done with regard to at incident at the DHS/CBP border in Calexico CA on 16 Feb. 2010.

I think that your web site is great, and necessary, to make the public more aware of the outlandish and illegal thrashing of our rights as American citizens.

Although, I have made my complaint known to DHS/CBP, through their normal channels, including the Inspector General of DHS, I am getting the feeling that the whole incident is being swept under the carpet.

I have contacted the Inspector General’s office at the Department of Justice, and was told that the DOJ has no jurisdiction with regard to DHS. (Here in lies the problem) DHS/CBP is left to police themselves with regard to citizen complaints.

If you have any suggestions or ideas it would really be appreciated. I have attached a ms word doc. of the complaint that was sent to DHS/CBP.

If you get a chance to read it, I would love to hear your thoughts on the matter.