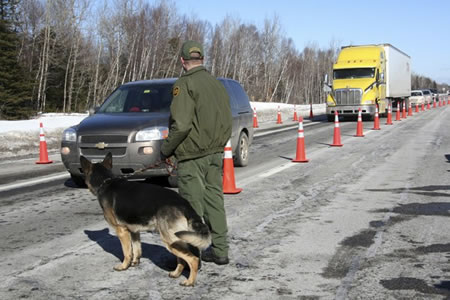 I’ve recently been pointed to several online news articles regarding Homeland Security checkpoints being setup in Northern Maine. The checkpoint(s) appear to be located between Sherman and Houlton along I-95. The closest border to the general area is New Brunswick, Canada to the East.

As with their Southern counterparts, the checkpoints being manned by Customs & Border Protection officers and Border Patrol agents are not being limited in scope to brief immigration queries as required by Supreme Court jurisprudence. Rather, the so-called immigration checkpoints are being utilized as dragnet enforcement operations with the assistance of drug sniffing dogs while agents actively look for stolen vehicles, contraband and terrorists, all absent any suspicion whatsoever. Additionally, Homeland Security is using air support to look for vehicles driving along perfectly legal travel routes within the vicinity of the checkpoint.

It’s interesting to note that CBP spokespersons have refused to release any information regarding how many illegal border-crossers have been apprehended or how much contraband has been confiscated. This of course indicates they haven’t interdicted anything worth mentioning. Otherwise, they’d be screaming it from the rooftops. It’s also interesting to note one of the comments from the CBP spokesperson in the first article:

I know some folks are inconvenienced but usually it takes a mere one or two minutes and youre on your way, he said.
…
Border Patrol, were all part of the community and one of our goals is to make our communities safer. Cooperating and just letting us do our job makes it that much easier for the traveling public, Casillas said.”

I’ve rarely heard such a statement in other news releases which most likely indicates the Border Patrol is receiving a lot of negative feedback regarding their misuse of scarce border security resources to harass domestic traffic inside the country instead of patrolling the border.

I’ve reprinted several articles below with links back to their original source. It’s good to see quite a few negative comments from folks in the area who don’t take kindly to armed federal agents seizing them and interfering with their traveling and privacy rights. I’ve included one such comment below followed by the reprinted articles.

For anyone in the area wanting to put an end to these ineffective and abusive violations of their fundamental rights, I encourage them to checkout what activist in Washington State have been doing. Additionally, anyone wishing to add to the discussion or post information about checkpoints in their area, feel free to do so on the Roadblock Revelations forum.

“Welcome to Amerika–are your papers in order? Another useless exercise, right up there with the TSA in the airports, adding absolutely nothing to the safety and security of this country and making an abject mockery of your former freedom to move freely within the borders of your own country. We’ve lost any renmant left of common sense in this country, confronted by thuggish men and women in uniform who aren’t very pleasant when you question as to why you are being stopped/detained miles and miles away from any border without a scintilla of evidence or articulable suspicion that you are up to anything wrong. It’s a sad day for this countrry everytime my husband and I see this sort of nonsense going on within our borders. What a complete and total waste of time. Resist, people, resist–your rights are being eroded by the Casillas of the world and their merry band of jack booted followers. Heil, Border Patrol!”

BANGOR, Maine  A U.S. Border Patrol checkpoint on Interstate 95 that began Tuesday and resumed Wednesday was part of the federal agencys overall mission to stop terrorists and their weapons from entering the country.

In this case, however, the particular focus was on ferreting out any illegal aliens who might have entered the United States unlawfully through its northern border, Deputy Chief Patrol Agent Alfredo Casillas of the U.S. Customs and Border Protections Houlton Sector said Wednesday afternoon.

This is just one of what I call the tools in our toolbox, Casillas said of the checkpoints conducted this week.

Though Casillas declined to say if the checkpoint would be operating today, he did say that agents had stopped about 1,000 vehicles a day earlier this week to determine if the drivers and passengers were U.S. citizens and if not, if they were here legally.

Casillas said that I-95 is an ideal location for such an operation because it is a choke point for people  including illegal aliens  who have entered the United States through its northern border and are heading south.

While checkpoints are under way, agents also keep an eye out for other illegal activities, including stolen vehicles, smuggling and contraband, including drugs, he said.

The checkpoint operation involved Border Patrol agents and trainees, dogs that can sniff out hidden people and drugs, and an aircraft that flew over the area looking for any vehicles driven by motorists who might have found out about the checkpoint and taken another route in an effort to bypass it.

Thats because illegal aliens, smugglers and those involved in the illegal drug trade have been known to send out scout vehicles that through radios or cell phones can alert their accomplices ahead of time, thereby enabling them to avoid detection, Casillas said.

The checkpoint near Sherman was among many that Border Patrol agents conduct from time to time, typically without notice, he said.

It does catch those who are going down the highway off guard but if we [announced plans ahead of time] the checkpoints would be much less effective, he said.

He also couldnt divulge if the agents encountered any aliens or contraband this week, but he did say checkpoints over the last year or two had turned up several pounds of OxyContin that otherwise would have wound up on the streets.

The timing of a checkpoint is based on several factors, including intelligence the agency receives from its own personnel, from other state and federal agencies in the United States and Canada and from the public on both sides of the border, Casillas said. He also said that the timing is driven by available manpower, federal and state safety regulations and weather considerations.

Casillas recommends that motorists who encounter a Border Patrol checkpoint simply use their common sense.

I know some folks are inconvenienced but usually it takes a mere one or two minutes and youre on your way, he said.

Occasionally, however, vehicles carrying several passengers or motorists who warrant a closer look  such as those who appear unusually nervous or who are driving rental cars  are pulled over so as not to impede the flow of traffic.

Border Patrol, were all part of the community and one of our goals is to make our communities safer. Cooperating and just letting us do our job makes it that much easier for the traveling public, Casillas said.

BANGOR, Maine (AP) — The U.S. Border Patrol says a checkpoint agents have been running on Interstate 95 in Maine are one of the agency’s tools in finding illegal immigrants, smugglers or terrorists in the United States.

The Bangor Daily News says Border Patrol agents conducted checks on the interstate near Sherman, Maine, on Tuesday and Wednesday.

Deputy Chief Patrol Agency Alfredo Casillas says I-95 is an ideal location for a checkpoint because many people use the highway to head south into the United States from Canada.

He wouldn’t say if the checkpoint will be operating Thursday or if agents encountered any illegal immigrants when they stopped more than 1,000 vehicles.

Agents stopped about 1,000 cars a day Tuesday and Wednesday at the checkpoint on I-95 in Sherman, south of Houlton.

The U.S. Border Patrol set up a check point this week on I-95 south of Houlton aimed at catching illegal aliens, terrorists and smugglers trying to enter the U.S. along the state’s northern border.

The checkpoint was set up Tuesday and Wednesday in Sherman, and U.S. Customs officials told the Bangor Daily News that agents have been stopping about 1,000 vehicles a day to check drivers’ and passengers’ residency status.

Agents were assisted by drug-sniffing dogs, and aircraft searching for people trying to evade the checkpoint. Such checkpoints are not new. Officials say they’re set up from time to time, usually without notice.

Deputy Chief Patrol Agent Alfredo Casillas of the U.S. Customs and Border Protection’s Houlton Sector would not divulge whether the checkpoint would be operating today, or whether the stops conducted so far have snagged any illegal aliens, smugglers or terrorists.