“Why don’t you just roll down your window and answer the question”, or similarly worded comments, are frequent questions I receive on my YouTube channel regarding my forced interactions with armed federal agents at suspicionless Homeland Security checkpoints inside the country. Take for instance the following comments:

“What is the logic behind your videos? And why would you be afraid to roll down your window? l’ll admit she kept her cool very well. l know the temptation to bust your window, drag you out and smash your face on the pavement after douching it with some Oleoresin Capsicum was their for acting like a punk. so kudos to her.” – wlindenlaub

—–
(For those unfamiliar with Oleoresin Capsicum, it's also known as pepper spray)

“The guy taking the video is being a prick. You actually have to answer the questions lawfully asked by a us agent or law enforcement official. She wasn’t detaining him nor asking to search him – she first wanted him to roll down the window (which you must lawfully follow the command) and wanted to ask a question (which you must lawfully answer). Try that shit at a military checkpoint and find yourself detained for refusing to comply with orders.” – rarelibra

While I partially addressed the second part of the question in a previous posting, the videos embedded in this article should adequately address the first part. Specifically, why don’t I roll down my window while being seized by armed federal agents at suspicionless checkpoints along public highways no where near the border.

As should be obvious to anyone paying attention, exercising one’s rights in the face of overly zealous (and oftentimes unaccountable) enforcement agents can be very hazardous to one’s health as Steven Anderson discovered not so long ago. 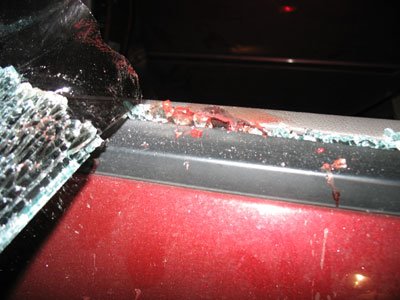 This simple fact of the modern American police state is also evident in the videos appearing in this article.

The video appearing above was recently posted to RP4409’s YouTube channel and shows a Border Patrol agent attempting to seize a camera by reaching into an open window of a vehicle at a checkpoint absent consent or probable cause.

Since videotaping federal agents at suspicionless checkpoints along public highways is perfectly legal, the actions of the agent were not.

By reaching into the vehicle to seize perfectly legal private property, the agent showed a surprising lack of training, judgment, common sense and total disregard for the traveling public he claims to be protecting and serving. Indeed, if you or I engaged in similar behavior, we would most likely be charged and prosecuted with aggravated assault.

In the video (not mine by the way), the checkpoint agent went even further then that of the agent above. After foolishly sticking his hand into the interior of a vehicle through a partially closed window showing blatant disregard for the rights of the vehicle occupants and his own safety, the agent eventually opened the unlocked door and dragged the passenger out absent probable cause to believe the passenger had done anything illegal. What’s especially disturbing is the agents verbal justifications throughout the encounter:

What these two videos show is that some armed federal agents manning internal homeland security checkpoints have no clue (or concern) regarding the extent of their lawful authority and little control over their actions/reactions when interacting with the public at large. This combination makes them not only a danger to themselves but also the public at large.

To be fair, enforcement agents are normally trained to deal with individuals when there is probable cause to believe the law has been broken. In such circumstances, agents are trained to take physical control of the encounter. Suspicionless checkpoints are a completely different scenario however. Vehicle stops are conducted absent individualized suspicion and the lawful scope of the seizure must be very narrow and time-limited absent consent or probable cause. Indeed, if either one of the agents depicted in the videos above felt the individuals filming them represented a physical threat, they would have never stuck their arms inside the vehicle while vehicle occupants still had the physical ability to roll up the window and/or drive away.

Agents have no lawful authority to attempt to physically control checkpoint encounters in the same manner they would a traffic stop based upon probable cause. This is one of the reasons why suspicionless checkpoint seizures shouldn’t be allowed in the first place. Just like the military shouldn’t be used in a policing role because of the different functions served by the two entities, police and federal agents shouldn’t be empowered to seize individuals under any circumstances absent reasonable suspicion to believe the individual has violated the law. After all, we are not servants of the government where our time and property can be arbitrarily commandered for its convenience.

By leaving one’s window rolled up high enough to prevent an agent from sticking one of his body parts through, you not only protect the integrity of your personal space but also prevent the agent from reacting without thinking first.

With an open window, it’s much easier for an agent to misrepresent the sequence of events escalating to physical violence. A window broken from the outside of a vehicle however is a very different story….