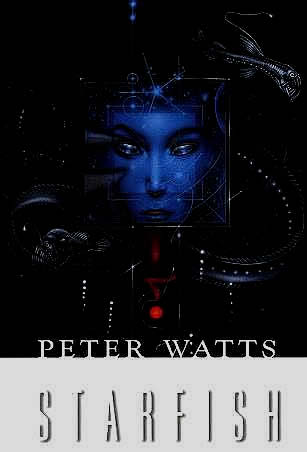 I noticed an increase in network traffic to the blog recently so took a closer look. What I discovered was that Peter Watts, an award-winning Canadian science fiction writer, was recently roughed up close to the Canadian border by U.S. homeland security goons with Customs and Border Protection.

It appears that Mr Watts was attempting to return to Canada via the Blue Water Bridge in Michigan when he was selected by Customs and Border ‘Protection’ agents for extra special attention in the form of a random vehicle search prior to leaving the country. That’s right, Mr. Watts wasn’t attempting to enter the United States. He was attempting to leave.

I’ve written about this asinine Homeland Security policy before as it applies to the Southern border but didn’t realize it had been extended to the Northern border as well. Neither did Mr. Watts from the sound of it who repeatedly asked what was going on and why was he being stopped and searched after exiting his vehicle.

The ego’s of the CBP agents obviously felt threatened by a mere mortal asking questions and not being sufficiently submissive. Consequently, they did what arrogant, overly-aggressive unaccountable federal agents usually do under such circumstances. They physically attacked Mr. Watts for daring to question their authoritah. After they were done beating him, they turned him over to local authorities who then arrested and charged him with assaulting a police officer. It should be noted, nothing illegal was found during the search, if one doesn’t include the beating that is.

You’d think Customs and Border Protection agents would be spending more time attempting to increase their abysmally low interdiction rate for illegal contraband coming into the country rather than harassing individuals trying to leave or worse yet, no where near a border. Obviously such quaint notions of effectiveness and legitimacy play little role in modern day homeland security policies and practices however.

What’s interesting to note here, assuming the reports I’ve read are accurate, is that the federal agents turned him over to local law enforcement. This is suspicious because federal agents are not considered state police officers in most circumstances and state laws governing the alleged assault of a police officer don’t normally cover federal agents. This is especially true given the fact that there are federal laws making it a crime to assault a federal agent.

Why then was Mr. Watts not arrested and charged federally if he did indeed physically assault a federal agent? Does anyone really think the federal government wouldn’t jump at the opportunity to prosecute someone who had clearly assaulted one of its own in the performance of his or her duties?

My guess is that the federal agents involved in the beat-down know that whatever Mr. Watts did, it didn’t rise to the level of assault. They probably also know that if they tried to charge him with assault themselves, the federal prosecutor would either refuse to take the case or a federal judge would laugh it out of federal district court. A federal prosecution would also place a much brighter light on their own actions during the incident, a light that could have a detrimental effect on their own careers if it wasn’t directed at just the right angle.

By turning the case over to local authorities, the federal agents absolve themselves of any direct responsibility for a malicious prosecution and they get the state to do their dirty work for them. State and local agencies are more than willing to go along with the charade because the Department of Homeland Security routinely doles out millions of dollars in bribes to local jurisdictions in the form of Homeland Security grants.

Assuming that Mr. Watts is indeed being charged at the state or local level, his legal team should look into whether or not the Michigan state statute(s) he’s being charged with violating applies to federal agents. In other words, does Michigan state law explicitly define, under these circumstances, that the agents involved in this fiasco were state police officers. If not, the charges against Mr. Watts must be dismissed. Additionally, a 2007 copy of the Customs and Border Protection Field Manual is available here. This could be useful for comparing Mr. Watt’s treatment at the hands of these agents to policies and procedures they are supposed to be following. Note – a newer version of the manual may be in effect.

While Michigan state law may have such a provision, I know that in Arizona that’s not the case. A federal agent must be explicitly cross-certified to enforce state law by the county sheriff where he’s working in order for such state-level coverage to exist. This certification must be renewed on a yearly basis and all such cross-certified federal agents must be registered by the county sheriff with the Arizona Peace Officer Standards and Training Board. I’d be surprised if there weren’t similar provisions present in Michigan law.

For more information regarding this incident, I’ve compiled several links below: