Part 14 of a 14 part video series highlighting a town hall meeting organized by Congresswoman Gabrielle Giffords appears above. The meeting was held on September 2, 2009 in Green Vally, Arizona to discuss/debate a recent GAO report on internal suspicionless homeland security checkpoints.

This video completes the Giffords Townhall video series. In this video, one more individual speaks followed by responses from government representatives and a closing by Giffords. Highlights appear below:

This entry completes Checkpoint USA’s 14 part video series on the town hall meeting held by Rep. Giffords regarding internal checkpoints. In summary, I was very disappointed in the way the GAO conducted itself and in Gifford’s acquiesence to the GAO report’s faulty conclusions. Reviewing the report for myself, it was obvious the GAO explicitly tailored it to rubber-stamp a pre-determined conclusion that a permanent checkpoint would be erected in Southern Arizona regardless of its effectiveness or feedback from the public.

We wont be getting much assistance from Congress, not that I’m surprised in the least. 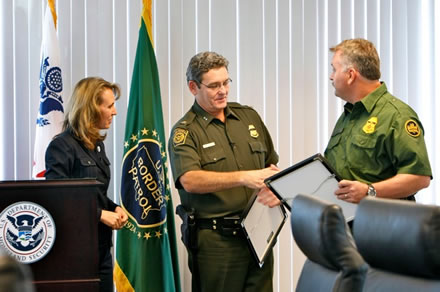 Links to part 1 through 14 of this special report appear below: