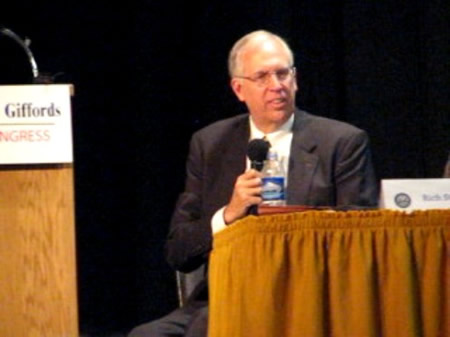 On September 2, 2009, Congresswoman Giffords organized a community meeting in Green Valley, Arizona to discuss the recent findings of a GAO study regarding interior Border Patrol checkpoints. The study was requested in 2007 by several Congressmen in direct response to public outcry in Southern Arizona regarding Homeland Security plans to establish a permanent suspicionless federal checkpoint South of Tucson along I-19.

Before continuing, it should be noted the intent of the Border Patrol and the Department of Homeland Security has always been to force a permanent checkpoint down the throats of Southern Arizonans regardless of the level of public outcry or the conclusions of the GAO report:

“The agency said it will wait to make a decision about the permanent checkpoint until the group’s findings are released but countered that, from the Border Patrol’s perspective, the work group wasn’t formed to debate permanent checkpoints but rather to get input about ways to make it most effective, Fitzpatrick said.

‘The Border Patrol is in the business of border security,’ Fitzpatrick said. ‘We’ve been doing this for 83 years. That’s our job. We’re the experts on this.'”

Perhaps this is one of the reasons why the GAO report is so obviously biased in favor of establishing the checkpoint, even to the point of ignoring some of its own findings and purposefully limiting the scope of the study.

Back to the actual meeting, Checkpoint USA was on hand to record the meeting and is now making it available to the general public. This is part 3 and highlights a presentation on the GAO report by Richard Stana with the Government Accountability Office (GAO).

As you can see from the video, during this part of the meeting GAO representative Richard Stana used a very poor sports analogy to try and convince the public that interior checkpoints on America’s streets are necessary. What Mr. Stana failed to acknowledge is that football players, and fans who attend football games, are engaging in voluntary interactions. Nobody forces football players to play the game and no one grabs individuals off the streets and forces them to watch and cheer the football players on.

Checkpoint agents on the other hand, indiscriminately seize individuals traveling along public highways no where near the border absent individualized suspicion. Armed federal agents then intimidate and threaten travelers to cooperate with them, even to allow suspicionless vehicle searches, under threat of deadly force. As such, there’s no legitimate comparison between football games and suspicionless checkpoints. Our rights are not trifles to be played with by federal bureaucrats who aren’t even capable of effectively patrolling a line in the sand to begin with.

Mr. Stana went on to point out that just because some of the data the GAO collected wasn’t up to par with standard auditing practices, that shouldn’t be viewed as a good enough reason to not allow the Border Patrol to establish permanent shrines to the burgeoning American police state along our highways. What Mr Stana failed to point out is that the Department of Homeland Security routinely refuses to abide by federal law in the form of the Freedom Of Information Act and purposefully fails to collect and keep records regarding basic issues such as the number of roving patrol and checkpoint seizures that don’t result in charges or false K9 alerts resulting in warrantless searches but no charges.

In other words, for those who have been paying attention, there is no accountability within the Department of Homeland Security. Stana ignores this fact and seeks to expand the department’s control over our daily lives anyway.

Finally, Stana fails to do any cost-benefit analysis to prove interior checkpoint operations are more effective than utilizing those same resources on the actual border. This is because a good faith review of the available data shows that border operations are more efficient than interior operations. This fact would undermine Mr. Stana’s foregone conclusion that permanent checkpoints should be established along our streets which is why it was ignored in the GAO report and the presentation.

This concludes part 3 of the meeting. Part 4 will finish up with Mr. Stana’s presentation and move on to a presentation from the Tucson Sector’s Chief Patrol Officer.

Links to all parts of this special report appear below: