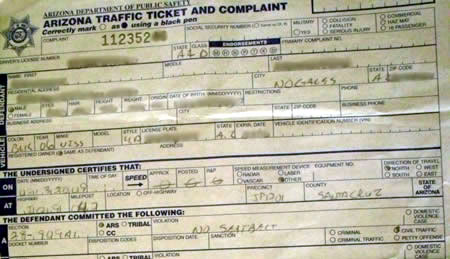 [Update: the citation has been dismissed by a judge after Officer Anguiano failed to show up in court. His absence was unexplained but not unexpected]

These federal grants are, of course, designed to buy more than just overtime pay for local police and new equipment for state agencies. They’re designed to buy loyalty. Specifically, loyalty to federal handlers and policies at the expense of local communities and individual rights.

In a recent example of the increasing interchangeability of local and federal ‘law’ enforcement, I’ve included correspondence below from an individual who passes through Southern Arizona’s I-19 Border Patrol checkpoint on a regular basis:

“I’d like to share with you last night’s experience at the checkpoint on I-19. Since the last times that I have sent you messages I have crossed this same checkpoint many times. Each time, I answer citizenship related questions only so I am sent to secondary almost always.

This of course is wrong and you and I know this. I never consent to searches and the dog is passed around the car. I am then allowed to leave.

However, last night was a little different. The reason might be because my previous encounter involved a hostile agent demanding my ID because I refused to disclose my destination after being asked about 8 times by 3 different agents. I took all of their names and left.

Anyways.. last night me and my friend were on our way to Tucson. At primary the agent asks if we are U.S. citizens and we respond yes. He then asks if he can search my trunk and I said no. We’re then sent to secondary. A DPS agent approaches and asks why I did not have my seatbelt on. I told him that I had just taken it off. I received a ticket for not wearing my seatbelt.

I told him he was being unreasonable and that this was an immigration checkpoint. His incoherent response involved something along the lines of “I could put up a stop sign and make people stop if I wanted to.”

Not only that but I waited about 20 minutes for them to finish searching my car. Again, the K-9 was used as a pretext. They went through my bags and searched the whole car.

Everything that happened was obviously beyond the scope of power given to them. My friend suggested that it might be personal now which is a possibility.”

“There were about 2 or 3 DPS cars at the checkpoint so i think they were probably working together. I came up on the left lane. When I lowered my window I was focusing on the BP agent. I can remember seeing a DPS in between the two lanes. My friend told me that this was not the same officer that gave me the ticket.”

The photo above can be clicked on to see the entire citation. I’ve redacted the personally identifying information of the victim to protect his privacy.

To sum up, travelers on their way to Tucson along I-19 were stopped at a Border Patrol checkpoint no where near the border where they answered all immigration related questions directed at them. Not satisfied with the responses, the stopping agent asked if he could search the vehicle’s trunk without reasonable suspicion or probable cause. When the driver exercised his rights by refusing to consent to a search, the agent diverted the vehicle to secondary inspection despite clear Supreme Court guidance requiring probable cause or consent to extend a detention or search a vehicle:

At secondary, a drug dog was used to search the vehicle absent consent. It’s unclear if the agents claimed the dog alerted or if they searched the vehicle despite lacking probable cause or consent. Regardless, twenty minutes later nothing illegal had been discovered (sound familiar?).

At some point during the time frame the travelers were being detained by Border Patrol agents at secondary, Arizona DPS officer M. Anguiano, badge #05915, approached the vehicle and ticketed the driver for not wearing a seatbelt. It’s unclear why Arizona DPS Officer Anguiano was hanging around at a federal Border Patrol checkpoint to begin with or why he felt the need to participate in the travelers detention at the hands of a federal agent. What is clear however is that the statute the driver was charged with violating didn’t apply to the situation:

Since the officer didn’t cite the driver with any other traffic violation, the statute requirements were not met. In other words, DPS Officer Anguiano assisted Border Patrol agents at a federal checkpoint in harassing a traveler by maliciously citing him with a traffic infraction in violation of the very statute referenced by the officer.

How much more harassment at the hands of overzealous federal and state ‘law’ enforcement agents must we suffer before we put an end to suspicionless checkpoints inside America?

“The principal protection of Fourth Amendment rights at checkpoints lies in appropriate limitations on the scope of the stop.” – Justice Powell U.S. v. Martinez-Fuerte

For further information related to this issue, I’ve compiled several links below. The first three highlight recent incidents where local law enforcement directly assisted Department of Homeland Security agents with their ongoing war against the 4th and 5th Amendments along with our Right to Travel. The last link has more to do with racial profiling which may be a factor in this case as well: