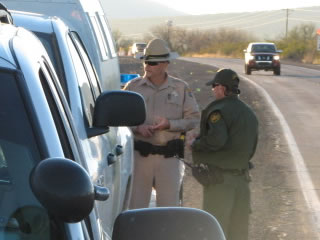 I’ve included an article below highlighting another disturbing trend in the continued careless intermingling of local and federal enforcement agencies.

It seems that the U.S. Border Patrol is now working closely with the Pennsylvania State Police, the Ohio State Patrol and the New York State Police in a crackdown on so-called aggressive driving, impaired driving and speeding.

Since the U.S. Supreme Court has made it clear the U.S. Border Patrol has no authority to enforce state or local traffic laws, it’s equally clear the Border Patrol will be using traffic stops initiated by local and state law enforcement as a pretext to enforce federal immigration and smuggling laws:

“Border Patrol agents have no part in enforcing laws that regulate highway use, and their activities have nothing to do with an inquiry whether motorists and their vehicles are entitled, by virtue of compliance with laws governing highway usage, to be upon the public highways.” – U.S. v. Brignoni-Ponce

That’s right, tomorrow morning you may be driving to work minding your own business along Interstate 90, 86, 80 or 79 in Pennsylvania and find yourself suddenly pulled over by the state police. An officer in gray, accompanied by an agent in green, may approach your vehicle and make the dubious claim that you were driving five miles over the speed limit or driving too ‘aggressively’, whatever that means.

At the same time, a Border Patrol agent who has no lawful authority to enforce local or state traffic regulations will take note of your slightly darker complexion or some other ‘suspicious’ characteristic associated with yourself or your vehicle and demand your citizenship along with access to your vehicle’s trunk. If you refuse to answer the federal agent’s questions, as is your right, the federal agent will most likely turn to the local police officer to force your compliance one way or the other.

While this joint action is one of the most blatant systematic examples of merging local, state and federal enforcement agencies I’ve heard about in a while, the trend has been ongoing for years. Indeed, I’ve experienced it first hand in Arizona on several occasions as has Steven Anderson.

I am of course interested in any photographs or videos that individuals who witness this joint operation can provide. I’m also interested in the results of any public records requests that may divulge the details of this joint action along with how much federal Homeland Security grant money participating local and state law enforcement agencies have received over the past few years. I’m sure the results of any such document requests would be quite interesting.

The public announcement regarding the joint enforcement action appears below along with additional information here.

State police will ramp up patrols of highways on Wednesday as a part of a tri-state traffic enforcement program.

In Pennsylvania, Interstates 90, 79, 80 and 86 will be heavily patrolled. Police will employ aerial speed enforcement along with motor carrier enforcement officers.

Wednesday’s effort is the second in a series of planned initiatives for the summer.

The first phase of the program was conducted May 13. Police issued 419 traffic citations in all three states during a 12-hour period. Only two accidents occurred on targeted roads during the first initiative, said Sgt. Mark Zaleski, a state police spokesman.