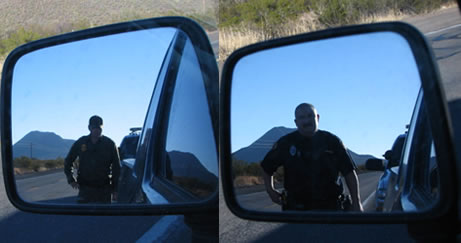 Last week, the Tucson Weekly published an article on my recent court victory where a Pima County justice court judge dismissed the single charge of impeding traffic (at a Border Patrol checkpoint) against me. The article can be found online here or can be accessed in its entirety below.

I’ve been putting together additional information regarding the case and the trial. I don’t quite have it all together yet but will hopefully finish it up sometime in the next week or so.

There’s a lot of interesting audio from the short trial in April – both from the police officer who maliciously charged me and the judge. You wont hear much from me since I wasn’t given an opportunity to speak. I do have a lot to say however 😉

Call it déjà vu all over again.

It was Dec. 20, 2008, and Terry Bressi found himself idling through a remote Border Patrol checkpoint on State 86. He was simply returning from his job at the Kitt Peak National Observatory, on the Tohono O’odham Reservation west of Tucson. But minutes later, he possessed a newly minted citation for impeding traffic.

One might be forgiven for assuming that traffic impediment is the actual purpose of these checkpoints, which are popping up with increasing regularity across the Southwest. But when it comes to Terry Bressi, the Border Patrol and the Tohono O’odham Police Department have a little score to settle.

Their beef with Bressi dates back to December 2002, when the engineer with the UA’s Lunar and Planetary Laboratory was making the same drive home. (See “Authoritarian Overreach,” Currents, March 19.) While stopped at what appeared to be a TOPD sobriety checkpoint, he noticed several U.S. Customs and Border Patrol agents lingering around the stop. Bressi contends that mixing those missions—having federal immigration agents working a checkpoint meant only to target drunk drivers—is blatantly illegal. When he started questioning the checkpoint and refused to provide information, he was arrested, cuffed and held beside the road for several hours.

In the meantime, that incident so outraged Bressi that he began photographing Border Patrol agents while passing through their checkpoints, a pastime they hardly find endearing. “The agents know very well who I am,” he says.

All of which makes the most recent events disturbing, if not surprising.

As Bressi approached the Border Patrol checkpoint this past winter, he noticed that the agents had apparently removed their nametags. “They refused to identify themselves,” he says. “They wanted me to state my citizenship, and I wanted them to identify themselves. So we had a little disagreement there.”

He ended up stuck at that checkpoint for several minutes. Coincidentally, during this discussion, a tribal officer was in the line of cars behind Bressi. As the standoff continued, Bressi says he saw agents direct that officer around the line. Then they suddenly waved Bressi through—and within seconds, the tribal officer was behind him, lights flashing.

According to Bressi, Officer Robert Carrasco refused to explain why he stopped him, and instead went back to the patrol vehicle and got on the radio. “During that time, some Border Patrol agents from that checkpoint pulled in behind the officer,” Bressi says, “and they conversed for awhile, and then he came back over and asked for my identification. But Officer Carrasco still wouldn’t tell me why he pulled me over.”

Because he had violated no federal laws, “the agents didn’t take action against me,” Bressi says. “Instead, it appears that they sought the aid of a tribal cop who was in the area to attempt to force my compliance and force me to identify myself when, clearly, I wasn’t required to under federal law.”

This wasn’t just any tribal cop. It turns out that Officer Carrasco had been at the checkpoint when Bressi was stopped the first time, way back in 2002. Now Carrasco chewed over the situation with the agents for about 15 minutes, says Bressi, “and the Border Patrol agent was looking over a sheet with the tribal cop, like they were trying to figure out what to charge me with.” Soon, a state trooper drove up to join the parley.

It was an impressive show of force, says Bressi, who was eventually cited by Officer Carrasco for “blocking or impeding the flow of traffic.”

On April 10, Judge Anne Segal of Pima County Justice Court quickly dismissed the charge. But questions remain. First, why was Bressi stopped and cited on what appears to be a deliberately concocted charge? Attempts to contact Officer Carrasco for an answer were unsuccessful. Nor did Chief Joseph Delgado of the Tohono O’odham Police Department return numerous phone calls seeking comment.

Second, why did the Border Patrol agents demand Bressi’s identification, but refuse to return the favor? For an explanation of Border Patrol policy regarding agent identification, we contacted Tucson Sector spokesman Omar Candelaria. “All of our uniforms have nametags on them,” Agent Candelaria says. “The policy is that the agent has the full uniform, which includes a nametag. But I’ve never seen anything in writing that says you have to identify yourself as a federal agent.”

However, Bressi has posted photographs of agents from the recent stop on his Web site, www.checkpointusa.org. None of them are wearing visible nametags. Did they perhaps remove those tags precisely because they knew his modus operandi?

And third, why are federal agents possibly colluding with a police officer over how to charge a stopped motorist? Candelaria sees no problems with such a confab. “We can speak to our law enforcement partners,” he says. “Nothing against policy there.”

But Chris Calabrese, an attorney with the American Civil Liberties Union, calls such situations troubling. “From our perspective, the purpose of the (Border Patrol) stop is to do one thing, and that is to check lawful status,” he says. “So when the stop gets extended or becomes about something besides that, I think it raises constitutional questions.”

On his Web site, Bressi sums up that roadside situation quite succinctly: “In hindsight,” he writes, “it’s obvious the (Border Patrol) supervisor detained me for nearly three minutes for the sole purpose of setting me up for the tribal officer. The tribal officer on the other hand was more than willing to do the Border Patrol’s dirty work by involving himself in a federal checkpoint operation in which he is neither certified nor trained to be a participant in. In so doing, he not only set himself up to take responsibility for his own actions, but those of the Border Patrol as well.”