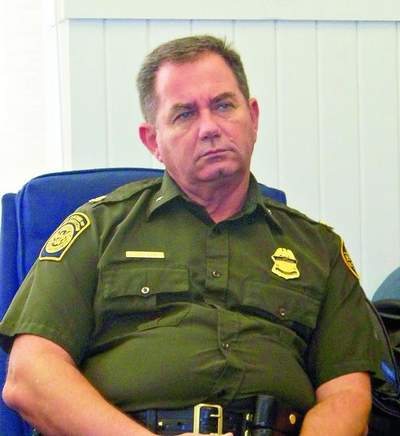 I’ve reprinted an article below regarding the recent conviction of Blaine Sector Border Patrol Deputy Chief Joseph Giuliano for child rape. Amazingly enough, the prosecutor in the case, Mac Setter, is attempting to keep Giuliano out of prison on supervised work release.

In light of this, it’s worth noting again that Giuliano was the second highest ranking Border Patrol agent in the Blaine Sector. He was a career ‘law’ enforcement officer in a position of substantial influence, authority and responsibility. The child he raped had been living in his and his wife’s home for several months.

While I’m not surprised that a prosecutor would seek leniency in such a case, it does serve as another sad example of the hypocrisy endemic within the so-called judicial system. Cases like this make it clear there is one set of rules for the well connected and influential and another set for the rest of us. Keep that in mind the next time a government agency or agent seeks to curtail your rights while claiming it’s for your safety, well-being or protection…

I also note that Giuliano isn’t even close to the only ‘bad apple’ in the Department of Homeland Security. I’ve been compiling a list of articles regarding crimes committed by Homeland Security agents for quite some time. It should be noted the list only includes articles I randomly come across while reading the news and shouldn’t be considered comprehensive by any definition of the word. Additionally, reports from the Department of Homeland Security’s Inspector General indicate abuse and corruption in the department continues to grow worse every year.

The article related to agent Giuliano appears below:

Joseph W. Giuliano, once described as “the face of the Border Patrol in the Northwest,” pleaded guilty to child rape charges in Whatcom County Superior Court Thursday, April 23.

As a former deputy chief patrol agent, Giuliano was the second in command for the U.S. Border Patrol’s Blaine sector and was in charge of protecting the U.S. border in western Washington, Oregon and Alaska.

But after pleading guilty to three counts of third-degree child rape Thursday, Giuliano will now have to register as a sex offender.

Giuliano was arrested in October 2008 after admitting to detectives that he had sex at least 24 times with a 14-year-old girl living in his home. He was 55.

Giuliano’s sentencing is scheduled for June 25, which allows the state Department of Corrections time to recommend if he should undergo sexual-deviancy treatment or serve prison time.

Setter said he’s recommending that the judge suspend Giuliano’s prison sentence, so that he wouldn’t serve prison time as long as he complied with his treatment.

Superior Court Judge Charles Snyder will determine the sentence and noted in court Thursday that Giuliano is facing a maximum of five years in prison on each count.

Based on state guidelines, Giuliano’s standard sentence would be between 46 and 61 months, Snyder said.

Setter said he tried to make his recommendation objectively and base it on what he would recommend in a case with similar legal circumstances.

Setter said he talked with the girl about Giuliano’s sentence and said she supports it. She has returned to living with her parents.

“She still is very emotionally involved with him,” Setter said. “She’s young and that will probably change in six months. She supports this result.”

Standing next to his attorney, Jill Bernstein, Giuliano kept his remarks in court brief, giving one-word answers to questions from the judge.

Snyder told Giuliano another sex offense could result in a sentence of life in prison without the possibility of parole. Giuliano said he understood this.

“How do you plead today?” Snyder asked.

Giuliano refused to comment as Bernstein escorted him out of the courthouse. He remains free after posting $50,000 cash for bail shortly after his arrest.

According to charging documents filed in Superior Court:

The girl moved into the Sudden Valley home of Giuliano and his wife, Patty, in February or March of 2008.

The girl told detectives she slept in the Giulianos’ bed, and began having sex with Joseph Giuliano while on a vacation in Arizona in April 2008.

The sexual relationship continued when they returned to Whatcom County, and they would communicate with each other by text messaging.

Setter said Patty Giuliano was unaware of the abuse occurring in her home.

An anonymous phone call from staff at Bellingham High School, where the girl attended, alerted detectives with the Whatcom County Sheriff’s Office.

Detectives interviewed Giuliano on Oct. 14, 2008, and he admitted to the crimes, saying he knew it was wrong and was afraid of getting caught.