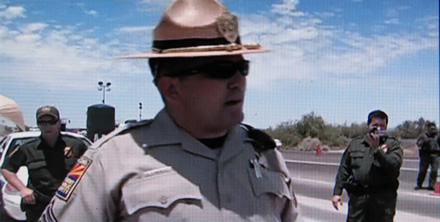 As a followup to my earlier post, the video embedded below is part two of a Yuma Border Patrol checkpoint protest staged on Memorial Day weekend. The purpose was to protest the general use of such suspicionless checkpoints against the traveling public inside the country along with the recent brutalization of Steven Anderson by federal Border Patrol Agents and state ‘public safety’ officers at this checkpoint. It was (and continues to be) a real tag team operation.

According to the Anderson Family blog, some of the Border Patrol agents responsible for the beating include:

Additionally, the Arizona Department of Public Safety Officers who participated in the beatdown include:

It should be noted that Mitchell was identified on Anderson’s blog as the DPS officer who tasered Anderson from the passenger side of the vehicle after breaking out the window.

With regards to the checkpoint protest video, a quick review of Arizona Revised Statutes indicates that DPS Officer E.J. McNeill may have been making it up as he went along. Specifically ARS 28-733 of Title 28 appears to be the pertinent statute. It states the Director of the Arizona Department of Transportation (ADOT) may prohibit pedestrians on controlled access highways, but signs to that effect must be erected:

A. The director may, and local authorities by ordinance may, prohibit the use of any part of a controlled access highway under their respective jurisdictions by pedestrians, bicycles or other nonmotorized traffic or by any person operating a motor driven cycle.

B. The director or the local authority adopting the prohibition prescribed in subsection A shall erect and maintain official signs on the applicable controlled access highway. When the signs are erected, a person shall not disobey the restrictions stated on the signs.

Any such restriction must of course apply equally to all. If an exception has been made for federal Border Patrol agents operating federal checkpoints along state highways then that same exception applies to individuals exercising their First Amendment Right to assembly, speech and redress regarding those checkpoints.

Having done related research for a court case I was recently involved in, I discovered that ADOT has been vested with sole authority over Arizona highways. As such and in accordance with rules promulgated by ADOT, the Border Patrol is required to make application for ADOT encroachment permits before operating federal checkpoints along state highways.

An Open Records Request to ADOT earlier this year resulted in the following list of Border Patrol permits:

Strangely enough, the list of encroachment permits provided to me doesn’t include one for I-8. If this is indeed the case, the Border Patrol is operating the checkpoint in violation of state law and ADOT regulations.

You’ll note that DPS officer McNeill never asked the Border Patrol to produce their permit authorizing the agency to conduct a checkpoint. He does however demand that individuals exercising their First Amendment recognized rights to speech, assembly and petition leave the area. I hope I’m not the only one who finds this behavior on the part of an Arizona public servant troubling.

Regardless, the only legitimate obstruction issue related to this video appears to be from Border Patrol agents since they were the only ones actually impeding or blocking traffic.

Part two of the video appears below: