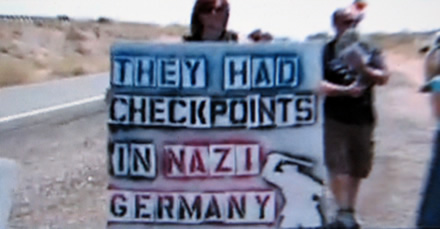 As previously blogged about here, a protest was held at a Border Patrol checkpoint east of Yuma on Memorial Day weekend. A dozen or so folks drove quite a distance out to the checkpoint where Steven Anderson was recently beaten and tasered by Border Patrol agents and misnamed Department of Public Safety officers (DPS).

His crime? He dared to exercise his right to be free from suspicionless seizures and warrantless searches while traveling within the United States.

It’s pretty clear from the video below that the Border Patrol was expecting them. The vehicles were just waved through the checkpoint when they arrived and I’m fairly certain that in addition to all the surveillance cameras around, I can see an agent videotaping the convoy after they enter the checkpoint. Additionally, all the agents who came out to meet the protesters were ranked supervisory patrol agents or higher including one field operations supervisor. Finally, the DPS showed up right at the end of the video which means they responded within five minutes or so after being called by the Border Patrol. I very quick response time.

The video appearing below is from RP4409’s YouTube channel and appears to be the first of four regarding the checkpoint protest: