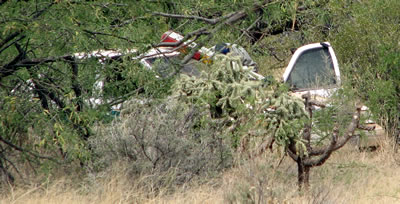 Several months ago, I came across an entry on the local Border Patrol union’s website where the union was complaining about the use of DPS photo radar cameras in Arizona. Since Arizona photo radar is a topic of interest to me, I read on and learned that union leadership was claiming photo radar was interfering with field agents doing their job.

According to the post, quite a few agents have been ticketed for excessive speed while on duty since the cameras were first turned on. Unwilling to give Homeland Security agents the same breaks they give themselves, the Department of Public Safety (DPS) has been forwarding tickets to Tucson Sector Border Patrol headquarters. 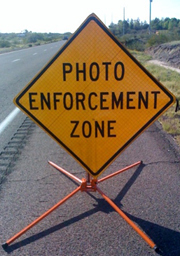 Now for those who have done even a modicum of research on photo radar, it should be clear that their use has nothing to do with safety and everything to do with shaking down the traveling public for additional revenue.

As such, I was happy to see the union leadership point this fact out in their blog:

“Photo radar is largely nothing more than a way for local and state governments to make money.”

Realizing that such lucidness was rare from the union, I was disappointed but not surprised by what I read next:

While at first glance this may sound reasonable, a closer look at state law and the excuses given for agents to exceed posted speed limits reveals something else entirely. Specifically, the union thinks field agents are above the law and shouldn’t be held accountable for their actions.

This is not the first time local Border Patrol union leadership has expressed such sentiments. In 2003, union boss Edward ‘Bud’ Tuffly complained bitterly that Border Patrol agents arrested for DUI by local police were being unfairly punished by the Border Patrol. The agency was imposing a mandatory 30 day suspension on any agent so arrested. This was primarily due to the fact agents arrested for DUI had their licenses suspended and were unable to perform their duties until their licenses were reinstated.

A look at the numbers in 2003 revealed that over 1% of Border Patrol union members operating in the Tucson sector had been arrested for DUI within a six month period making the annual DUI arrest rate approximately 2%. When comparing this with the population at large, it became apparent that Tucson sector Border Patrol agents were being arrested for DUI at a rate twelve times greater than the general population. 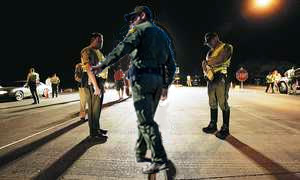 (a slightly doctored photo of a local sobriety checkpoint...)

When I first came across the posting, I had a hard time believing the union was arguing that a 30 day suspension for agents was somehow unfair after the agents had violated the law, put the public they were allegedly protecting in harms way and couldn’t perform the basic functions they were hired to perform.

Having more familiarity with local union leadership since 2003 however, I’m no longer surprised by such ridiculous assertions. Now as then, the President of the local chapter of the Border Patrol Union is Edward ‘Bud’ Tuffly.

Getting back to photo radar, the union went on to say:

“We stop lots of vehicles and engage in a multitude of other enforcement actions that require us to exceed speed limits.”

This is certainly true as my own experiences clearly show:

14MAY2008RovingPatrolStop from Checkpoint USA on Vimeo.

What the union fails to mention is that many of the traffic stops are illegal because they are conducted absent reasonable suspicion, a legal requirement imposed by the Supreme Court on roving patrols in U.S. v Brignoni-Ponce (1975):

The post also fails to mention that occasionally agents exceed the speed limit and endanger the public merely to make it to the nearest convenience store as quickly as possible. 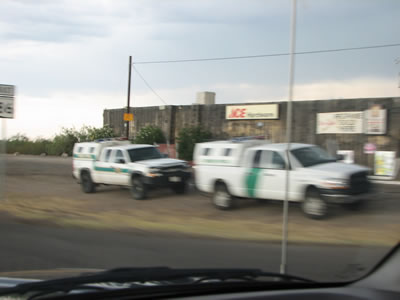 How do I know this? Because I’ve been passed many times over the years by agents traveling at excessive speeds without their lights on only to see them pulling into the parking lot of a convenience store located at the SR86 – SR286 intersection in Three Points, Arizona.

I’ve also passed by several accidents over the years involving Border Patrol vehicles as can be seen in the photo at the top of this article. In the past, the Border Patrol has also had a hard time keeping their helicopters in the air.

The union goes on to say:

“This is just one more thing for agents to worry about. Follow the pursuit policy, catch up with the vehicle, watch the suspects, assess probable cause, call in vehicle and suspect information, don’t get shot or run over, and, oh yeah, don’t forget to note the date, time, exact speed, and reason for your speed any time you pass a photo radar position so you will have something to rely on weeks later when a “citation” is issued.”

While my heart goes out to BP union members for the trials and tribulations they must endure while harassing domestic traffic inside the country instead of patrolling the border, folks should understand what the Border Patrol considers to be suspicious behavior justifying pursuing a vehicle at high rates of speed and/or initiating traffic stops:

That’s right, unlike local police who usually pursue vehicles because they witnessed the driver violating a traffic law or are responding to a report of unlawful behavior, Border Patrol agents are usually doing nothing more than profiling using the weakest of criteria when pursuing vehicles at excessive rates of speed in Southern Arizona.

Since the union claims agents are authorized to exceed the speed limit in the performance of their profiling duties, any discussion on this alleged authorization must include an analysis of Arizona law. In this case the following statute applies:

First we learn that Arizona traffic laws do indeed apply to vehicles owned & operated by the federal government unless there are specific exceptions written into law.

B. If the driver of an authorized emergency vehicle is operating at least one lighted lamp displaying a red or red and blue light or lens visible under normal atmospheric conditions from a distance of five hundred feet to the front of the vehicle, the driver may:

1. Notwithstanding this chapter, park or stand.

2. Proceed past a red or stop signal or stop sign, but only after slowing down as necessary for safe operation.

3. Exceed the prima facie speed limits if the driver does not endanger life or property.

4. Disregard laws or rules governing the direction of movement or turning in specified directions.

Since police vehicles refer to local or state law enforcement vehicles, there doesn’t appear to be any specific exception written into Arizona law for Border Patrol vehicles operating away from the border pursuing individuals with poor hygiene practices or who didn’t smile at an agent while passing by.

Nonetheless, even if we ignore the clear wording and intent of the law and lump federal Border Patrol agents in with those who have been explicitly exempted from Arizona speed restrictions under limited circumstances, Border Patrol agents routinely exceed posted speed limits without using their enforcement lights or sirens as my video above clearly shows. I’m also sure most of the photo radar citations would show this to be the case as well.

Further, if an agent was pursuing an individual who was later pulled over and arrested for violating federal law, there would be a clear record of this justifying the excessive speed. The union however was referring to those instances where there is no record because no citation or arrest resulted from the pursuit which means it was done without reasonable suspicion.

To sum up, local Border Patrol union leadership appears to think Arizona law should apply to everyone in Arizona except its own agents. Rather, Border Patrol agents shouldn’t be burdened with obeying Arizona’s rules of the road. Nor should they be held accountable for their transgressions.

Indeed, the harshest criticism union boss Tuffly has for union agents arrested for DUI is:

“Everybody must decide for themselves how to go about their personal lives, but please think twice before you drink and drive”

The Border Patrol union post regarding photo radar is reprinted below in its entirety. It no longer appears on their website:

“Photo radar is largely nothing more than a way for local and state governments to make money. Border Patrol agents are authorized to exceed posted speed limits in the performance of their duties. When a “citation” is received by Sector, and an agent is asked “What were you doing 27 days ago at 9:03 a.m. exceeding the speed limit on Interstate 19?”, it is likely that the agent will not be able to remember. We stop lots of vehicles and engage in a multitude of other enforcement actions that require us to exceed speed limits. This is just one more thing for agents to worry about. Follow the pursuit policy, catch up with the vehicle, watch the suspects, assess probable cause, call in vehicle and suspect information, don’t get shot or run over, and, oh yeah, don’t forget to note the date, time, exact speed, and reason for your speed any time you pass a photo radar position so you will have something to rely on weeks later when a “citation” is issued.”

“We are hopeful that our new governor will ditch the photo radar. Until then we will attempt to work with the Agency to address this problem. It will only get worse, as Pima County has now decided to jump on the enhanced revenue bandwagon with stationary and mobile photo radar sites. A private company collects money with each paid citation, and is making millions of dollars along with the state and local governments.”

“It is disturbing that we have received information that at least one supervisor has demanded that agents he supervises personally assume responsibility for photo radar citations. Sound ridiculous? We agree.”

While photo radar is indeed ridiculous, what’s even more ridiculous is the local union’s claim that Border Patrol agents should be allowed to ignore posted speed limits while also ignoring the border they’re paid to patrol in order to profile traffic at excessive rates of speed along Arizona highways.