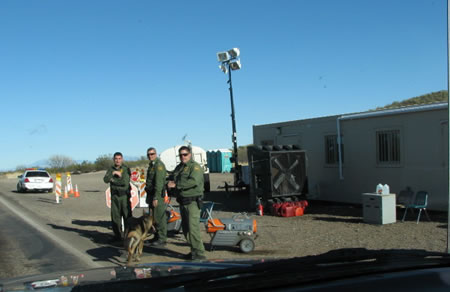 In 2007, I posted a series of blog entries regarding a proposed permanent Border Patrol checkpoint along I-19 near Tubac, Arizona that Homeland Security was attempting to ram down the throats of Southern Arizona residents. The checkpoint plans were met with a fair amount of resistance from local individuals, communities, business owners and politicians. In response, the Border Patrol temporarily tabled the plans and settled for a temporary or tactical checkpoint in its stead.

Recently, plans for a permanent checkpoint hit the news again as the Border Patrol quietly continued pushing for funding and approval through Congress. In response, concerned residents in Southern Arizona organized a protest this weekend.

For background, I’ve included links to my earlier blog entries along with a few YouTube videos taken in 2007 by a community activist. I’ve also included a recent news report from KOLD News 13 regarding the recent protest.

Tubac residents were sending a message on Friday evening, by driving through the Border Patrol checkpoint on Interstate 19.

“It may be small, but it doesn’t matter how many are here as long as we’re here,” said resident Bruce Pheneger as they taped signs to their cars. “Our message is pretty strong and we think compelling.”

“They may catch drugs there but I think those are just sacrificial lambs while they’re moving a big load around it,” said Garry Hembree, owner of Old Presidio Traders who also participated in the protest.

He said that he was worried about how the checkpoint might affect business.

“The economy’s not good, okay? The checkpoint doesn’t help, and there’s no way to determine what is what,” he said.

But he has determined that the Border Patrol has better uses for its agents.

“In my opinion, they need to take those resources and those manpower and put them on the border,” he said.

The Border Patrol said that the checkpoint is another layer of security against drug and human smuggling that is responsible for 25 percent of all drugs seized and twenty percent of all apprehensions in the I-19 corridor.

For his group, the Border Patrol’s money would be better spent away from their backyards.

“We respect them for the job they do, we just believe at this time and this point, their strategy and their tactics are not really going to work and not going to create an effective barrier against narco-terrorism,” he said.

One thought on “Tubac Residents Protest I-19 Checkpoint”