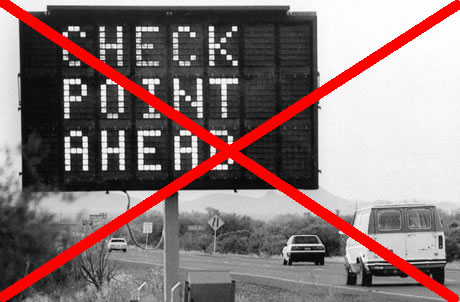 Over the past year, I’ve blogged about the increased Border Patrol presence in Washington State along with the agency’s use of internal suspicionless checkpoints. The use of these random checkpoints targeting domestic traffic away from the border resulted in a large public outcry along with organized resistance.

It now looks like public pressure in Washington State has had a positive effect.

According to the news article appearing below, the Border Patrol has not conducted a checkpoint in Washington State away from the border since September 2008. This despite assurances from local Border Patrol mouthpiece Michael Bermudez that, “We are expecting to begin using them frequently.”

If public pressure is indeed responsible for the sudden change in policy regarding the use of checkpoints in Washington State, it’s a good reminder of what grassroots activism against the steady encroachment of the burgeoning American police state is capable of accomplishing.

When the U.S. Border Patrol said last August that it was intensifying its use of highway checkpoints on the North Olympic Peninsula, outrage and division greeted the move.

Sixty people attended a protest in Forks Aug. 30 after a 16-year-old illegal immigrant was among those detained at a Border Patrol roadblock, and 400 packed a forum in Chimacum Nov. 3.

Protests have continued this year; at two of them, others showed up to display support for the Border Patrol.

Border Patrol bus boardings, which increased to weekly occurrences in December, have continued.

But the last checkpoint was on Sept. 9, 2008, just 16 days after Border Patrol Spokesman Michael Bermudez said, “We are expecting to begin using them frequently.”

That was seven months ago.

Why did they stop?

“We use them when we need to use them,” said Bermudez, stationed in the Blaine sector office, which oversees Border Patrol activities on the Peninsula.

Public affairs officer Steve Cribby said from the national headquarters the roadblocks are “intelligence driven, and we have not seen a need to utilize the checkpoints in that area,” emphasizing the agency also concentrates on drug seizures and smuggling, as well as seeking illegal immigrants and terrorists.

Border Patrol officials also would not attribute the absence of checkpoints to political pressure from Washington state’s congressional delegation, including U.S. Rep. Norm Dicks, D-Wash.; protest by residents, including street demonstrations, or angry letters and petitions.

In a Feb. 9 letter to Secretary of Homeland Security Janet Napolitano, Dicks protested the checkpoints and asked for clarification on their use.

And on April 6, a 1,250-1,300-name petition was presented at the Port Townsend City Council meeting that called for a reduction of Border Patrol activities nationwide.

“Those were not factors we used,” public information officer Doy Noblitt said last week from the regional Blaine headquarters.

Checkpoint setups are “based on operations decisions made by staff and senior leadership in the (Blaine) section,” he said.

Has there been a change in checkpoint policy, especially with the Obama administration announcing in March that a companion agency, U.S. Immigration and Customs Enforcement, would switch its focus from raiding workplaces to pursuing miscreant businesses and executives?

“There has not been a change in policy,” said Jason E. Carroll, deputy commander of the Border Patrol’s Port Angeles station.

Added Cribby: “Right now, there are no intended or planned changes for the policy.”

So why no checkpoints?

“Factors that determine operational planning are sensitive in nature and are not for public disclosure,” Bermudez said in a subsequent e-mail.

“The U.S. Border Patrol does not release copies of checkpoint policy. It is operationally sensitive.”

Meanwhile, the Department of Homeland Security is forging ahead with plans to purchase land for a permanent Peninsula Border Patrol office and short-term detention facility in Port Angeles after dumping plans in December for a modular office on leased land, Bermudez said late Friday.

The facilities office of U.S. Customs and Border Protection, under which the Border Patrol falls, is “dealing with land purchasing,” Bermudez said, adding he didn’t know about potential sites.

“It’s out of our hands right now,” Bermudez said. “They need to move through the process of acquiring the land so we can move forward. We are waiting for them.”

The roadblocks were set up on U.S. Highway 101 between Forks and Beaver in Clallam County and, in Jefferson County, on state Road 104 one mile west of the Hood Canal bridge and on Highway 101 south of Discovery Bay.

They also made arrests for drug possession, confiscated $2,500 of illegally harvested salal and arrested individuals based on outstanding misdemeanor and felony warrants.

But the reaction from those three weeks of roadblocks — in which federal agents stopped Peninsula residents in their cars and asked them if they were U.S. citizens — reverberated from late summer through the winter.

Agents are interested only in people leaving the Peninsula, although Jefferson Transit’s No. 7 bus makes five trips Monday through Friday to the Poulsbo Transfer Center in Kitsap County.

“We look at it from a threat analysis standpoint, where the greatest amount of people come in and where they would be headed,” Bermudez said.

He would not describe the particulars of the threat analysis and what led to the conclusion that boarding buses would help reduce that threat.

Threat analyses are not contained in written reports.

The last complaint about a bus being boarded was in mid-December, Judith Morris, Dicks’ district representative in Port Angeles, said Wednesday.

Morris was on a bus boarded by an agent who went down the aisle and asked if each rider was a U.S. citizen.

Olympic Bus Lines owner Jack Heckman of Port Angeles told the Peninsula Daily News on Dec. 7 that agents were boarding buses at the Discovery Bay stop about once a week. Agents board only buses at stations and stops, not buses in transit.

A driver told Heckman on Wednesday that her bus was boarded Tuesday.

“They are just getting used to it,” Heckman said.

The agents “are very unobtrusive. I think all the hoop-de-la is over, at least in the Port Angeles area.”

That may be true for Port Angeles, but not Port Townsend.

On April 6, Annette Huenke presented to the Port Townsend City Council a petition circulated by a subgroup of the Port Townsend Peace Movement and signed by 1,250-1,300 people against the checkpoints and bus boardings.

The petition urged a halt to racial and ethnic profiling and a reduction in Border Patrol activities nationwide.

“These activities abuse our civil liberties, waste physical and financial resources and do not enhance border security,” it said.

“They did not give any indication they are stopping them,” Huenke said.

“They are one small part of the big issue, which to me is: What do we need them for? We don’t need them chasing Mexicans around the Peninsula. We have a sheriff’s department, the state police and the city police. It’s a duplication of law enforcement.”

Stop the Checkpoints organizer Marilyn Harbaugh, of Port Angeles, said she and others of like mind have noticed the lack of checkpoints since the August 2008 announcement, speculating checkpoints may increase more as the weather gets warmer and tourist and harvest seasons begin.

“They are still boarding buses at Discovery Bay, and I’d like to see that stop,” Harbaugh said.

But Edeltraut Sokol, of Port Townsend, a supporter of Border Patrol activities, suggested the agency may have limited resources that would prevent a constant presence on the Peninsula.

The Blaine sector is responsible for Alaska, Oregon and 19 of Washington’s 39 counties, though the number of Port Angeles-based agents has increased sixfold from four in 2006 to 24 today.

“My feeling is they stepped back for political reasons. Local people harassed Norm Dicks’ office, I’m sure of it. I have a feeling, politically, he asked them to step back.”