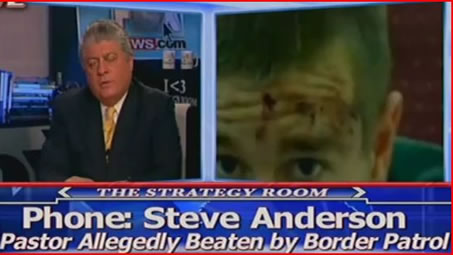 Steven was beaten by Border Patrol agents and Arizona DPS officers at an internal suspicionless Border Patrol checkpoint last week for peacefully refusing to submit to a warrantless search that lacked probable cause or even reasonable suspicion. Border Patrol agents claim a drug dog alerted on Mr. Anderson’s car but Anderson claims otherwise. Additionally, the agents refused to bring the dog out a second time even though Anderson and DPS officers requested the agents do so.

After Anderson was assaulted and dragged out of his vehicle by the on-scene enforcers, a search of his vehicle found nothing illegal. False alerts and agents fabricating alerts are common at such checkpoints and used extensively as an excuse to search vehicles that couldn’t be justified otherwise.

The interview with Judge Napolitano appears below in three segments. The first segment starts about eight minutes into the video. One of the judge’s most interesting statements, something many of us have known for quite some time now, appears below:

“Let me say this. The camera is the new gun. Filming the government and showing its excesses and showing its utter ignorance of the Constitution which every person who works for the government has taken an oath to uphold, will have massive effect. And we of course who believe in your civil liberties and your right not to be stopped by the government absent some demonstrable evidence of criminal activity will make sure that this tape, let’s just say, will be seen by a great number of people.”

For those interested in contributing, a legal defense fund for Mr. Anderson is available here.