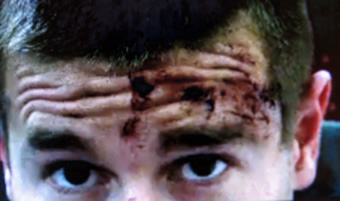 Freedom’s Phoenix has setup a legal defense fund for Steven Anderson, the individual brutalized by the Border Patrol and Arizona Department of Public safety last week.

Mr. Anderson was driving back to his home in Phoenix from San Diego when he was stopped and detained absent suspicion at an internal Homeland Security checkpoint seventy miles East of Yuma along I-8 in Southern Arizona.

While being questioned absent suspicion by the agents at the checkpoint, Mr. Anderson chose to exercise his right to remain silent. This led to an hour long stand off where agents who claimed they had probable cause to detain and search Mr. Anderson instead called and complained to the Arizona Department of Public Safety.

After arriving onscene, DPS officers busted both of Mr. Anderson’s side windows, tazered him repeatedly, smashed his head into the broken glass, dragged him out of his vehicle and threw him to the asphalt. DPS officers then continued tazing Mr. Anderson while a Border Patrol agent used the heel of his jackboot on Mr. Anderson’s head to hold him down.

After searching Mr. Anderson’s vehicle, no contraband of any type was discovered.

To add insult to injury, DPS officers then charged Mr. Anderson with two criminal misdemeanor violations of Arizona law and ticketed him for a crack in his windshield in order to justify the beat down they had just dished out.

This outrageous act of violence perpetrated against an individual merely for exercising his rights must be exposed for what it is. Naked government violence, contempt and brutality directed against the very same individuals the government claims to be ‘protecting’ and ‘serving’.

To help offset Mr. Anderson’s legal bills, Checkpoint USA has pledged to match every donation dollar for dollar up to $400.00. Please consider sending a message to the thugs in the U.S. Border Patrol and Arizona Department of Public Safety who assaulted this man by donating to Mr. Anderson’s legal defense fund located here.

Additional information regarding Mr. Anderson’s ordeal can be accessed below: