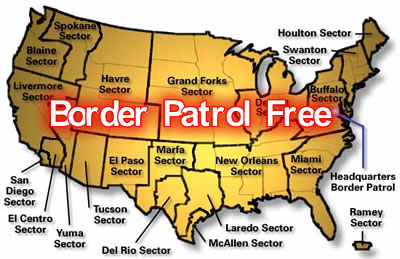 Over the past year, I’ve blogged about the Border Patrol buildup in Washington State on several occasions:

Most recently, concerned individuals and organizations in Washington State banned together to counter further Border Patrol encroachment into their local communities and on individual rights. Their website, BORDER PATROL FREE, highlights Border Patrol aggression in the area and provides information and assistance to individuals on how they can protect themselves along with reporting abusive Border Patrol activity they encounter.

A video from BORDER PATROL FREE is available below followed by a news article regarding Border Patrol agents boarding local transit buses to harass travelers absent suspicion of wrongdoing. My thanks to the readers of this blog for the links:

Signs telling bus riders their civil rights, as delineated by the ACLU, when asked about citizenship by U.S. Border Patrol agents will be posted inside Jefferson Transit buses.

The signs were the result of Jefferson Transit officials wanting to make their buses a “safe haven” for riders. The transportation agency is not charging the ACLU for the space for the signs, one per bus.

Border Patrol officials have said they were interested in boarding buses that travel across county lines, such as those running between Sequim and Port Townsend.

They have not boarded public transit buses since checkpoints and other Border Patrol efforts to protect the U.S. border heightened on the North Olympic Peninsula since late last year.

“The ACLU wants to do this as a pilot project,” said Jefferson Transit General Manager Dave Turissini, after the Transit board approved the signs Tuesday.

Turissini said the signs would be posted on buses in about two weeks.

The signs give riders three pieces of advice:

• If you’re not a U.S. citizen and are age 18 or older, you must show your immigration papers to federal agents.

• Everyone has the right to remain silent.

The sign titled, “Your Rights with Border Patrol Agents on this Bus,” advises riders they can contact ACLU at 206-624-2180 or www.aclu-wa.org.

“There’s been a lot of concern from people in Port Townsend about the activity of the Border Patrol,” said Doug Hoenig, communications director with ACLU of Washington, explaining why the legal rights organization created the signs for Jefferson Transit.

“Quite a few people in Port Townsend have said that they are concerned that the Border Patrol is questioning people without any reason, and so we felt we should tell people about their rights.”

Hoenig said the ACLU is also producing palm cards in English and Spanish with more details about civil rights and the Border Patrol.

These cards will be distributed in Jefferson and Clallam counties by individuals supporting ACLU’s efforts.

He said the ACLU will continue to speak out against Border Patrol checkpoints on the Peninsula.

Michael Bermudez, U.S. Border Patrol spokesman in Blaine, after seeing a copy of the bus sign said in an e-mail: “The Border Patrol respects the rights of all citizens and non-citizens in the United States.”

He said that the Border Patrol “checks public conveyances as part of layered enforcement efforts in our mission to secure our nation’s borders.

“Criminals operating illegally across our borders use public transportation to leave the immediate border area and travel into the interior of the country.

“The Border Patrol checks public transportation to thwart those attempts.”

The checks are authorized under Section 287 of the Immigration and Nationality Act, Bermudez said, adding that conveyances may be stopped and searched for illegal immigrants.

“These checks are focused on public transportation conveyances that travel egress routes with destinations away from the border areas.”

In November, the Transit Authority board — made up of county commissioners and Port Townsend City Council members — discussed whether federal Border Patrol authority trumped a reasonable right to privacy on a bus.

Vice Mayor George Randels, a members of the Jefferson Transit Board, said last month: “I believe that Transit should stand up on this issue. I think we certainly have an obligation to do this.”

Border Patrol activity stepped up on the Peninsula last summer.

Agents operated roadblocks north of Forks and near the Hood Canal Bridge to check identification of those traveling on the highway. They detained suspected illegal immigrants and some citizens with warrants out for their arrests.

Agents have been reported boarding Olympic Bus Lines buses, which travel throughout the Peninsula and to the Seattle area.

The managers of Clallam Transit and Jefferson Transit lines said that they had not had specific bus checks.

After a public forum on Nov. 3 attended by nearly 400 people at the Chimacum High School auditorium, some riders expressed fears over Border Patrol presence on public buses.

As part of a build-up of immigration law enforcement on the country’s northern border, Border Patrol agents based in Port Angeles have increased from four to 24 in two years, and the federal Department of Homeland Security has announced plans to build a facility, with a short-term detention area, in Port Angeles in 2009.