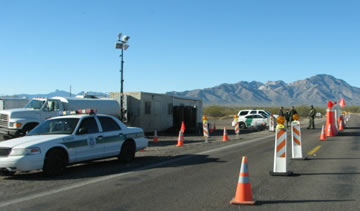 After a recent abusive experience at an internal Homeland Security checkpoint along I-8 in the Yuma Border Patrol Sector, Freedom’s Phoenix editor David Hodges recounts his experience below.

While reading the account, keep in mind that the Supreme Court placed strict limitations on the scope of such checkpoints in 1976 in order to limit their intrusiveness:

“Our prior cases have limited significantly the reach of this congressional authorization, requiring probable cause for any vehicle search in the interior and reasonable suspicion for inquiry stops by roving patrols. Our holding today, approving routine stops for brief questioning is confined to permanent checkpoints. We understand, of course, that neither longstanding congressional authorization nor widely prevailing practice justifies a constitutional violation” – U.S. v Martinez-Fuerte

To Terry and Other Like-Minded Americans.

I have been reading Terry’s excellent articles on the abusive behavior of many of federal officials as they man the roadblocks associated with border control.

Many of Terry’s articles accurately portray the mistreatment of American citizens at the hands of these “public servants.”

On January 3, 2009, at 11pm, while driving back from Yuma, on I-8, with my companion, I suffered the same indignity that Terry often speaks about.

I was told to pull over and exit the vehicle and to sit down. I asked what was the reason related to my detention. I was told to shut up. I was then told my vehicle was going to be searched and I asked what was the probable cause associated with the search. I was again told to shut up. I watched in horror as the drug dogs went through my car and in less than 10 seconds, it was over and I was told that I and my companion were free to go. I, again, repeated my question as to what the probable cause consisted of for my detention and warrantless search. I was told to “get while the gett’in was good.” At that point, my companion, Gil Lopez (an American teacher and a basketball coach) called me a “coyote” and told me to get into my car. It was at that moment that I realized my American friend of hispanic origin had been racially profiled and that was the true reason for our detention and illegal search even if the Border Patrol would not care to admit it.

If the first casualty on the immigration problem is the United States Constitution, then we have already lost the war as well as many of our civil liberties, namely, the fourth and fifth amendments.

I have a new appreciation for Terry and the valuable service that he is providing by shining the light of day on this abuse of American citizens.

For more information regarding last year’s Guadalupe sweeps near Phoenix, Arizona, I’ve provided a link to a related article below:

For those who don’t believe these misnomered ‘crime suppression sweeps’ weren’t about harassing immigrants, legal or otherwise, I’ve included entries recently appearing on the Local 2544 Border Patrol Union’s website (which have since been removed). In these entries, local union leadership first endorse Sheriff Arpaio for County Sheriff and then boast about personally attending Arpaio’s sweeps near Phoenix, AZ while meeting with Arpaio face to face. All the while claiming these operations and their involvement had nothing to do with rounding up immigrants.

Methinks they doth protest too much:

05-01-08 “We have endorsed Joe Arpaio in his bid to be re-elected as the Maricopa County Sheriff. Buckeye Police Chief Dan Saban is running against Sheriff Arpaio. Saban is a very poor choice, for many reasons, and the police union in Buckeye voted to endorse Arpaio as well. Read the endorsement here.”

06-25-08 “Local 2544 Executive Board Officers will attend parts of the upcoming crime suppression sweeps in Mesa.

We will not attend in an official capacity as Border Patrol agents. We will be there as civilian observers on our personal time.”

We met privately with Sheriff Arpaio and his two top commanders. We stood with Sheriff Arpaio during his press conference to show our support for what he and his deputies were attempting to accomplish. Sheriff Arpaio introduced Tuffly and PLEA President Mark Spencer at the beginning of the press conference and thanked us for being there. We then accompanied MCSO detectives and deputies during the enforcement action in Mesa. We will post a full report here soon. We wanted to see for ourselves what was going on with the MCSO crime suppression sweeps. We will plainly tell you up front that what we found is not even remotely close to what most in the media are reporting. More to follow.”