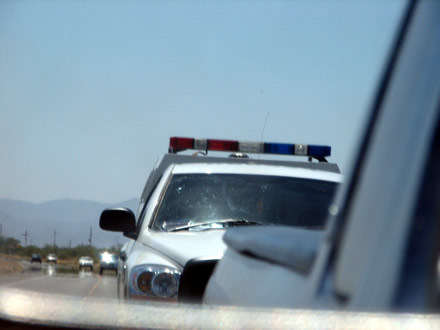 The folks over at Papers Please recently linked to a gem of a story showing us just how the Department of Homeland Security is going about ‘protecting’ us from the bad guys.

Given my own experiences with Homeland Security agents who are more than willing to shake down the traveling public absent suspicion while hiding behind their guns and badges, the following excerpt from the linked article struck a cord with me:

“…When I discovered that she had missed her flight, after about 24 hours of travel thus far, I called immigration at Minneapolis and asked to speak with Officer Knapp. Knapp got on the phone, but this time it was me questioning him. Knapp told me it was legal to read e-mails. I asked for his first name, but he was afraid to give his first name, which was rather strange for someone working within the confines of an airport where everyone has been searched for weapons.”

“Where I work, in a war zone, soldiers give their first and last names and face Taliban and al Qaeda heads up, man to man. I write about al Qaeda, Taliban and other terrorist groups who kill thousands of people. My name is Michael Yon. My first name is Michael. Mr. Knapp hides behind a badge bullying a woman whose only activities are Yoga, reading, travel, and telling me what is healthy and unhealthy to eat. Knapp is a face of Homeland Security. How many other officers at Homeland Security bully 90-pound women, but are afraid to give their own names?”

The article is a good read and provides additional perspective on how Homeland Security is allegedly protecting the Homeland in our name and with our taxed dollars. In fact, when you combine this article with similar DHS actions which have resulted in the death of an infant, not to mention what appears to be routine detainee abuse and deaths, the picture begins to take on a rather sinister tint.