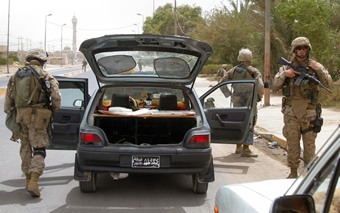 As reported earlier, I came across additional information regarding the participation of the U.S. Marines in sobriety checkpoints being conducted by the County Sheriff and Highway Patrol in San Bernardino County, California.

According to a December 10, 2008 press release from the Highway Patrol, USMC Military Police participated in a joint task force with the County sheriff and state police to conduct a sobriety checkpoint on December 12, 2008. All in violation of the Posse Comitatus Act that prohibits the military from participating in civilian law enforcement operations under most circumstances.

Lawrence Taylor at DUI Blog had this to say regarding the news:

I’ve posted in the past about the increasing federalization of drunk driving laws and law enforcement procedures. See Here Come the Feds and The Future of DUI. But even I wasn’t ready for the latest development…

The Morongo office of the California Highway Patrol (CHP) in conjunction with the San Bernardino Sheriff’s Department and the USMC military police will conduct a joint sobriety/driver license checkpoint on Friday, December 12, 2008, somewhere in the unincorporated/incorporated area of San Bernardino County.

As an American citizen, not to mention a former Marine, I find this troubling — particularly in view of the clear wording of the Posse Comitatus act of 1878, described in Wikipedia:

The Posse Comitatus Act is a United States federal law (18 U.S.C. § 1385) passed on June 16, 1878, after the end of Reconstruction. The Act prohibits most members of the federal uniformed services (the Army, Air Force and State national Guard forces (when such are called into federal service) from exercising nominally state law enforcement, police or peace officer powers that maintain “law and order” on non-federal property (states and their counties and municipal divisions) in the former Confederate states.

The statute generally prohibits federal military personnel and units of the National Guard under federal authority from acting in a law enforcement capacity within the United States, except where expressly authorized by the Constitution or Congress. The Coast Guard is exempt from the Act.

A follow-up call to a Marine Corps public affairs sergeant resulted in assurances that the Marines would be there “as observers”. Hmmmm…..military observers. Isn’t that how it all starts?

Thanks to Branson Hunter and Andre.

It should be noted that I previously blogged about suspicionless checkpoints in San Bernardino, County well over a year ago. At that time, the county sheriff was stopping vehicles to conduct suspicionless searches for fireworks. It seems that San Bernardino County authoritarians not only have a thing for Fourth Amendment trampling enforcement operations, but now want to bring the military into the action as well.

So much for being free from unreasonable search and seizure….