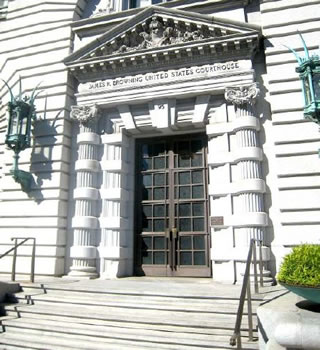 As previously announced, a three judge panel in the United States Court of Appeals for the 9th Circuit heard oral argument in my five year running civil rights lawsuit on the morning of November 20, 2008. The lawsuit, filed in December of 2003, stemmed from an illegal joint task force roadblock I ran afoul of on December 20, 2002. A full account of this incident spanning the past six years is available here.

The court case, no. 07-15931, is an appeal from the United States District Court for the District of Arizona, case no. CV-04-264-JMR. The three judges who conducted the hearing consisted of:

Representing myself at the hearing were attorney’s David Euchner and Jim Harrison. Representing the appellees was Roger Frazier for the four named police officers. Additionally, a Mr. Ferraro from the U.S. Attorney’s office (on behalf of assistant U.S. Attorney Gerald Frank) represented the United States regarding the lawsuit’s malicious prosecution claim.

Each side was granted 15 minutes to present their case to the panel and answer any questions from the judges of which there were many. It’s unknown when the panel will issue its ruling but it will most likely be sometime in the next month or so.

To my pleasant surprise, the United States Court of Appeals creates an audio record of each hearing and posts it online a day or two after it takes place. As such, I’ve downloaded the audio file for this hearing from the 9th Circuit’s website and make it available here.

For those who have trouble with the wma audio file format, I’ve also converted it to mp3 and make it available for here. When the panel makes its final ruling, an update will be posted to this blog.

Many thanks to all those who made this hearing possible.