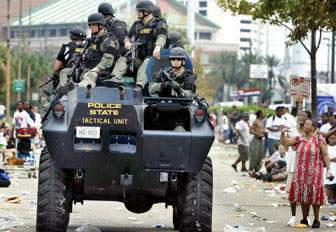 As the burgeoning American police state continues to form, it appears that the U.S. military wants in on the action according to a recent Army Times article appearing below.

The article indicates that the Army’s 3rd Infantry Division’s 1st Brigade Combat Team, also known as the ‘Raiders’, has been assigned to U.S. Northern Command located at Peterson Air Force Base in Colorado Springs, Colorado for deployment within the United States. The deployment is slated to begin October 1st for one year and will most likely become a permanent fixture to NorthComm with different combat units rotating in from year to year.

The article explains the mission of the combat team as follows:

“They may be called upon to help with civil unrest and crowd control or to deal with potentially horrific scenarios such as massive poisoning and chaos in response to a chemical, biological, radiological, nuclear or high-yield explosive, or CBRNE, attack.”

The 1st Brigade Combat Team, a.k.a. ‘Raiders‘, consists of veteran combat troops who, according to their commander, are willing and able to deploy the first-ever non-lethal military crowd and traffic control field package against unruly Americans:

The 1st BCT’s soldiers also will learn how to use “the first ever nonlethal package that the Army has fielded,” 1st BCT commander Col. Roger Cloutier said, referring to crowd and traffic control equipment and nonlethal weapons designed to subdue unruly or dangerous individuals without killing them.

“It’s a new modular package of nonlethal capabilities that they’re fielding. They’ve been using pieces of it in Iraq, but this is the first time that these modules were consolidated and this package fielded, and because of this mission we’re undertaking we were the first to get it.”

The package includes equipment to stand up a hasty road block; spike strips for slowing, stopping or controlling traffic; shields and batons; and, beanbag bullets.

While some will undoubtedly chastise me for insinuating that civilian authority would ever misuse U.S. military forces against the American people, we only need look back to post-Katrina New Orleans to get a taste of what to expect:

While watching the video, please pay close attention to the comments and actions of the National Guardsmen towards the end of the video.

It should be noted that the illegal order to seize firearms from all individuals within the city was eventually challenged in federal court where a federal district court judge ruled the seizures to be illegal and unconstitutional. This however didn’t stop Mayor Ray Nagin and his police chief from refusing to return the stolen weapons until further legal action was threatened many months after the fact.

For those interested in a well written, well researched historical overview of police states and their origins, I recommend the following book available on Amazon.com:

The State vs. The People: Rise of the American Police State

Now, onto the Army Times article:

3rd Infantry’s 1st BCT trains for a new dwell-time mission. Helping ‘people at home’ may become a permanent part of the active Army

Now they’re training for the same mission — with a twist — at home.

Beginning Oct. 1 for 12 months, the 1st BCT will be under the day-to-day control of U.S. Army North, the Army service component of Northern Command, as an on-call federal response force for natural or manmade emergencies and disasters, including terrorist attacks.

It is not the first time an active-duty unit has been tapped to help at home. In August 2005, for example, when Hurricane Katrina unleashed hell in Mississippi and Louisiana, several active-duty units were pulled from various posts and mobilized to those areas.

But this new mission marks the first time an active unit has been given a dedicated assignment to NorthCom, a joint command established in 2002 to provide command and control for federal homeland defense efforts and coordinate defense support of civil authorities.

After 1st BCT finishes its dwell-time mission, expectations are that another, as yet unnamed, active-duty brigade will take over and that the mission will be a permanent one.

“Right now, the response force requirement will be an enduring mission. How the [Defense Department] chooses to source that and whether or not they continue to assign them to NorthCom, that could change in the future,” said Army Col. Louis Vogler, chief of NorthCom future operations. “Now, the plan is to assign a force every year.”

The command is at Peterson Air Force Base in Colorado Springs, Colo., but the soldiers with 1st BCT, who returned in April after 15 months in Iraq, will operate out of their home post at Fort Stewart, Ga., where they’ll be able to go to school, spend time with their families and train for their new homeland mission as well as the counterinsurgency mission in the war zones.

Stop-loss will not be in effect, so soldiers will be able to leave the Army or move to new assignments during the mission, and the operational tempo will be variable.

Don’t look for any extra time off, though. The at-home mission does not take the place of scheduled combat-zone deployments and will take place during the so-called dwell time a unit gets to reset and regenerate after a deployment.

The 1st of the 3rd is still scheduled to deploy to either Iraq or Afghanistan in early 2010, which means the soldiers will have been home a minimum of 20 months by the time they ship out.

In the meantime, they’ll learn new skills, use some of the ones they acquired in the war zone and more than likely will not be shot at while doing any of it.

They may be called upon to help with civil unrest and crowd control or to deal with potentially horrific scenarios such as massive poisoning and chaos in response to a chemical, biological, radiological, nuclear or high-yield explosive, or CBRNE, attack.

Training for homeland scenarios has already begun at Fort Stewart and includes specialty tasks such as knowing how to use the “jaws of life” to extract a person from a mangled vehicle; extra medical training for a CBRNE incident; and working with U.S. Forestry Service experts on how to go in with chainsaws and cut and clear trees to clear a road or area.

The 1st BCT’s soldiers also will learn how to use “the first ever nonlethal package that the Army has fielded,” 1st BCT commander Col. Roger Cloutier said, referring to crowd and traffic control equipment and nonlethal weapons designed to subdue unruly or dangerous individuals without killing them.

“It’s a new modular package of nonlethal capabilities that they’re fielding. They’ve been using pieces of it in Iraq, but this is the first time that these modules were consolidated and this package fielded, and because of this mission we’re undertaking we were the first to get it.”

The package includes equipment to stand up a hasty road block; spike strips for slowing, stopping or controlling traffic; shields and batons; and, beanbag bullets.

“I was the first guy in the brigade to get Tasered,” said Cloutier, describing the experience as “your worst muscle cramp ever — times 10 throughout your whole body.

The brigade will not change its name, but the force will be known for the next year as a CBRNE Consequence Management Response Force, or CCMRF (pronounced “sea-smurf”).

“I can’t think of a more noble mission than this,” said Cloutier, who took command in July. “We’ve been all over the world during this time of conflict, but now our mission is to take care of citizens at home … and depending on where an event occurred, you’re going home to take care of your home town, your loved ones.”

While soldiers’ combat training is applicable, he said, some nuances don’t apply.

“If we go in, we’re going in to help American citizens on American soil, to save lives, provide critical life support, help clear debris, restore normalcy and support whatever local agencies need us to do, so it’s kind of a different role,” said Cloutier, who, as the division operations officer on the last rotation, learned of the homeland mission a few months ago while they were still in Iraq.

Some brigade elements will be on call around the clock, during which time they’ll do their regular marksmanship, gunnery and other deployment training. That’s because the unit will continue to train and reset for the next deployment, even as it serves in its CCMRF mission.

Should personnel be needed at an earthquake in California, for example, all or part of the brigade could be scrambled there, depending on the extent of the need and the specialties involved.
Other branches included

The active Army’s new dwell-time mission is part of a NorthCom and DOD response package.

Active-duty soldiers will be part of a force that includes elements from other military branches and dedicated National Guard Weapons of Mass Destruction-Civil Support Teams.

A final mission rehearsal exercise is scheduled for mid-September at Fort Stewart and will be run by Joint Task Force Civil Support, a unit based out of Fort Monroe, Va., that will coordinate and evaluate the interservice event.

In addition to 1st BCT, other Army units will take part in the two-week training exercise, including elements of the 1st Medical Brigade out of Fort Hood, Texas, and the 82nd Combat Aviation Brigade from Fort Bragg, N.C.

There also will be Air Force engineer and medical units, the Marine Corps Chemical, Biological Initial Reaction Force, a Navy weather team and members of the Defense Logistics Agency and the Defense Threat Reduction Agency.

One of the things Vogler said they’ll be looking at is communications capabilities between the services.

“It is a concern, and we’re trying to check that and one of the ways we do that is by having these sorts of exercises. Leading up to this, we are going to rehearse and set up some of the communications systems to make sure we have interoperability,” he said.

“I don’t know what America’s overall plan is — I just know that 24 hours a day, seven days a week, there are soldiers, sailors, airmen and Marines that are standing by to come and help if they’re called,” Cloutier said. “It makes me feel good as an American to know that my country has dedicated a force to come in and help the people at home.”