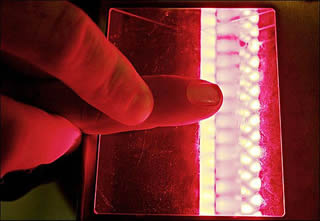 Thanks to the bloggers over at The Daily Paul, I was recently keyed into an interesting article regarding local police and the DHS.

It looks like police departments across the country are starting to use Homeland Security grants earmarked for terrorism to instead purchase portable fingerprint scanners.

According to the article, some of these portable scanners are being utilized by police at suspicionless DUI checkpoints where it would appear local law enforcement anticipate finding lots of drunk terrorists.

As I’ve discussed in previous posts, most DUI Checkpoints across the country are already funded through grants from the National Highway Traffic Safety Administration (NHTSA) and thereby bypass the traditional checks and balances inherent in a system of local budgetary control. Instead, the NHTSA funnels money through state highway safety office’s to local enforcement agencies that agree to grant terms setup by the NHTSA.

This of course has a corrupting influence on local enforcement in that agencies increasingly look to federal sugar daddies for new sources of revenue and are only too happy to abide by any attached federal strings. This in turn results in an allegiance shift away from protecting local communities to enforcing the will of federal agencies instead.

With the advent of Homeland Security terrorism grants, this trend has been reinforced as local enforcement agencies increasingly look to federal homeland security handlers to provide equipment that local political entities responsible for funding local enforcement have deemed unnecessary through the standard budgetary and review process.

The extent to which these portable fingerprint scanners will be used against the populace is unclear but if history serves as a guide, we can expect them to be abused as the police state marches on.

A link to an older Wired article on this subject appears below along with the text of a recent article regarding the use of such equipment at suspicionless DUI checkpoints near Los Angeles:

Cops Use DHS Money to Scan Fingerprints at Checkpoints

Police officials are excited about a new high tech gadget that will make their jobs a little bit easier.

Through a Homeland Security grant, Los Angeles County purchased 500 mobile fingerprint scanning devices that can be used by officers in the field.

The device allows officers to identify people through their fingerprints who have previously been booked through the Los Angeles County penal system.

Roughly 200 scanners went to LAPD, and the rest were spread to agencies throughout the county. The Claremont Police Department only got one, but it has already been put to good use.

Police just picked up the machine last Thursday, and by Friday it helped them nab a potentially dangerous criminal. At a sobriety checkpoint on Indian Hill Boulevard, just south of the 10 Freeway, over 2000 vehicles were screened, resulting in 14 arrests. Two were arrested for driving under the influence of alcohol.

Among those stopped at the checkpoint was a man who told police that he did not have his driver license. His car was pulled off to the shoulder, where police asked his identity.

“He supplied a name that we ran a records check on that came back with no match,” Claremont Police Captain Jenkins said.

Claremont Police Corporal Chris Bradley then put the department’s new gadget to use for the first time. The man’s index fingers were scanned right at the scene and 5 minutes later, the police had the information they needed.

“We were able to pull up all his real information; his name, date of birth and all that,” Corp. Bradley said. “And then we saw that he had a no-bail parole hold.”

Albert Dominguez, 26, of Chino, was a parole violator out on murder charges. He is now in custody in Los Angeles.

“The nice thing about this is, we were able to identify him right there out in the field,” Corp. Bradley said.

Created by Cogent Systems, the device normally runs about $1000 each. Law enforcement officials hope to eventually have one in every patrol vehicle, Cpt. Jenkins said. In the meantime, Claremont police will have to share their scanner until more funding for additional devices is available.

Police believe they will be particularly useful at checkpoints where identifying unlicensed drivers is a constant challenge.

“There’s always a number of identification issues at the checkpoints so this will be a big help,” Cpt. Jenkins said.