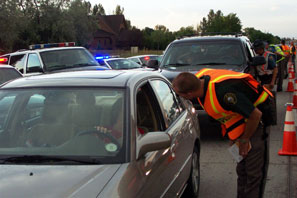 From the (incomplete) description of the police action, it sounds like multiple checkpoints were setup along I-5, a major interstate highway in Southern Arizona, and various secondary routes around the target area where all vehicle traffic was being stopped and seized so police could conduct suspicionless checks of one form or another on the traveling public.

This of course is a growing trend across America where a once free people now suffer routine suspicionless interference in their lives by militarized police forces that seek to dominate and control local communities instead of serve and protect.

The text of the article appears below. The comments are also worth a read. If anyone has additional information regarding this police action directed against the people, please let me know:

In my life I have never seen anything like this! My niece got married today. The Wedding festivities ended at midnight. On my way home on the opposite side of the #60 freeway going into Downtown L. A. I see very large trucks w/flashing lights – about 25 to 30 – lined up to form a single-file line for cars to follow to be stopped by at least 2 dozen police! This is on a 5-lane freeway, mind you!

Thousands of cars and thousands of unsuspecting people are experiencing for the first time in their lives, the full impact of what a police state is all about this morning, folks! The freeway looks like a parking lot!

As I transitioned to the northbound Golden State Frwy, aka the #5 Freeway, which starts at the Canadian border and runs through Washington State, through Oregon and all the way through California to the Mexican border, just before I get to downtown L. A. on my side of the freeway I see the same thing in the distance. Again, lots of trucks w/flashing lights and tons of cars stopping ahead of me to be herded to the checkpoint.

So, I quickly and fortunately got off at the very next offramp and tried to get on, again, further up the road. However, there were several arrows on the streets for people to follow – seemingly to take you on a detour to another on ramp – but, no; they only led to more check points!

Because I know my city like the back of my hand, I managed to evade the check points by going through neighborhood streets until I could finally get back onto the freeway some distance beyond the checkpoint. I live in Burbank and I couldn’t get onto the northbound Golden State Frwy until I passed Griffith park which is about 3 to 4 miles beyond where the check point started on the freeway on my side (about 6 to 7 miles from where I first noticed the check point on the opposite side of the freeway!)

Every single one of those 3 to 4 miles on my side had cars w/mulitple passengers in them and the cars were at a complete stop waiting for their turn to be chuted in like cattle to be asked for their papers (?) and to be questioned by the cops (for possible DUI?). I would say, there were, at least, 3 to 4 and maybe even 5 thousand cars, approximately, on both sides of the checkpoints waiting to get through the. Unbelievable!!

Never in my 61 years have I ever seen anything like this before!!

I saw at least 25 tow trucks pulling vehicles away from the check point areas. I’m very much in shock and very fortunate to know my way around my city to have avoided what is still going on as I type this message. I had such a wonderful day only to be knocked back to the ugly reality of what is happening to us in our country, Martial Law! IT’S SCARY OUT THERE!!