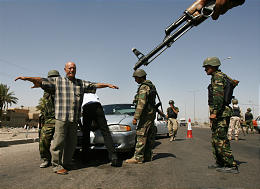 I haven’t had much time to look into this story yet but it appears that Washington D.C. police will be targeting specific neighborhoods in the D.C. area for military-style checkpoints designed to shutdown the targeted neighborhoods to unapproved vehicle traffic while forcing individuals to identify themselves along with the purpose for their travels.

The following quote from a Washington Post article sums up this police state operation nicely:

Thanks to everyone who emailed me links to this developing story. If these police state checkpoint enforcement operations aren’t challenged and squashed early on, expect to see them appear in every major community across America in the next five to ten years.

Links to additional related articles appear below along with text from two of them:

D.C. Police Chief Cathy L. Lanier announced a military-style checkpoint yesterday to stop cars this weekend in a Northeast Washington neighborhood inundated by gun violence, saying it will help keep criminals out of the area.

Starting on Saturday, officers will check drivers’ identification and ask whether they have a “legitimate purpose” to be in the Trinidad area, such as going to a doctor or church or visiting friends or relatives. If not, the drivers will be turned away.

The Neighborhood Safety Zone initiative is the latest crime-fighting attempt by Lanier and Mayor Adrian M. Fenty, who have been under pressure from residents to stop a recent surge in violence. Last weekend was especially bloody, with seven slayings, including three in the Trinidad area.

The enforcement will take place at random hours and last for at least five days in Trinidad, with the option of extending it five more days. Checkpoints could be set up in other neighborhoods if they are requested by patrol commanders and approved by Lanier.

The strategy, patterned after a similar effort conducted years ago in New York, is not airtight. There are many ways to get in and out of Trinidad, not just on the one-way Montello Avenue. And pedestrians will not be stopped, which is something critics say might render the program ineffective.

“I guess the plan is to hope criminals will not walk into neighborhoods,” said D.C. Council member Phil Mendelson (D-At Large). “I also suppose the plan is to take the criminal’s word for it when he or she gives the police a reason for driving into a neighborhood.”

Since taking over as chief in December 2006, Lanier has struggled with the issue of violent crime. She has added patrols, revived a unit specializing in getting guns off the streets and changed commanders in six of the city’s seven patrol districts. Last weekend, officers were close enough in one case that they heard the barrage of gunfire coming from a triple homicide on Holbrook Street in Trinidad.

The program is aimed at the city’s most troubled areas. The 5th Police District, which includes Trinidad, has had 22 killings this year, one more than all of last year. Since April 1, the Trinidad neighborhood has had seven homicides, 16 robberies and 20 assaults with dangerous weapons, according to police data. In many cases in Trinidad and across the city, gunshots are fired from passing cars, victims are found in cars or cars are used to make fast getaways.

“We have to try to take away the things that are facilitating the ability to commit crime,” Lanier said.

Leaders of the American Civil Liberties Union said yesterday that they will be watching what happens closely and that legal action is likely.

“My reaction is, welcome to Baghdad, D.C.,” said Arthur Spitzer, legal director for the ACLU’s Washington office. “I mean, this is craziness. In this country, you don’t have to show identification or explain to the police why you want to travel down a public street.”

“I don’t anticipate us being sued,” Nickles said. “But if you do want to sue us, the courts are open.”

U.S. Attorney Jeffrey A. Taylor said that D.C. officials consulted his office about their plans and that prosecutors suggested some changes to try to ensure that any arrests would hold up in court. “We applaud the District’s efforts to make neighborhoods safer,” Taylor said. “Whatever we do has to be consistent with the Constitution.”

New York police set up a nearly identical checkpoint in 1992 in a neighborhood of the Bronx that was plagued by drug dealing and drive-by shootings. Police ran the Watson Avenue Special Operation on a random basis, mostly in evening hours. Officers stopped drivers, but not pedestrians, coming into the area, to confirm that they had a legitimate reason to be there.

A federal appeals court upheld the legality of the New York effort, saying in a 1996 ruling that it “served an important public concern” and was “reasonably viewed as an effective mechanism to deter crime in the barricaded area.”

D.C. police have used various forms of checkpoints for years. In 1988, for example, they blocked streets and searched courtyards in a pair of apartment complexes in Northeast Washington in a bid to drive out drug dealers. That move came during the crack cocaine epidemic, in a year when the city recorded 372 homicides. Last year, the city had 181 killings.

Former D.C. police chief Isaac Fulwood Jr., who led the department from 1989 until 1992, said he liked using checkpoints because his officers were able to make arrests and gather intelligence.

“They are effective. You recover stolen cars and firearms,” Fulwood said. “You’ve got to have a lot of them if you’re going to have them. You need to move as the criminal element shifts.”

Some residents expressed support for the plan yesterday, saying they are willing to submit to the checks if it makes the neighborhood safer. “We can’t endure any more homicides,” said neighborhood activist India Henderson.

But others said they were disappointed police have not developed relationships that would allow them to gather information and find criminals without resorting to the stepped-up tactics.

“I knew eventually we’d be a police state,” said Wilhelmina Lawson, who has lived in the neighborhood for 20 years. “They don’t talk to us, they’re not community minded.”

One of Lanier’s plans, the Safe Homes initiative, has yet to get off the ground because of a community backlash. The plan, announced by Lanier and Fenty at a news conference in March, called for police to go door-to-door in crime-ridden areas and ask residents whether they could go inside and search for guns. Residents and some council members voiced concerns that homeowners would feel intimidated by police. Lanier backed off, but said she plans to move forward soon by having residents call police to set up appointments.

Another plan, to arm hundreds of patrol officers with semiautomatic rifles, starting this summer, also got mixed reviews from residents.

Kristopher Baumann, head of the D.C. police lodge of the Fraternal Order of Police, said he was concerned about public perception of the checkpoints and the potential that it could lead to more citizen complaints. He questioned Lanier’s overall approach, saying, “There is no strategy and no mid-term and long-term planning.

“That’s the biggest disappointment of Chief Lanier’s tenure,” Baumann said. “One thing we were excited about and optimistic about was, for once, we’d have strategies to combat crime and not just be reactive. But we haven’t seen it. It’s been a year and a half.”

Council member Harry Thomas Jr. (D-Ward 5), who represents Trinidad and other parts of Northeast Washington, said he had informal discussions with Lanier in which she had mentioned the possibility of the checkpoint announced yesterday, but he got little notice before the news conference. Civil liberties are always a concern, said Thomas, who maintained that residents are so concerned about violence that they will be willing to give the latest program a try.

“I think the general consensus is that we have to do something because people live in fear,” he said. “What would you rather have?” he asked. “A positive pattern of [police] checking things . . . or these folks who come into the community and wreak havoc?”

WASHINGTON – D.C. police will seal off entire neighborhoods, set up checkpoints and kick out strangers under a new program that D.C. officials hope will help them rescue the city from its out-of-control violence.

Under an executive order expected to be announced today, police Chief Cathy L. Lanier will have the authority to designate “Neighborhood Safety Zones.” At least six officers will man cordons around those zones and demand identification from people coming in and out of them. Anyone who doesn’t live there, work there or have “legitimate reason” to be there will be sent away or face arrest, documents obtained by The Examiner show.

Lanier has been struggling to reverse D.C.’s spiraling crime rate but has been forced by public outcry to scale back several initiatives including her “All Hands on Deck” weekends and plans for warrantless, door-to-door searches for drugs and guns.

Under today’s proposal, the no-go zones will last up to 10 days, according to internal police documents. Front-line officers are already being signed up for training on running the blue curtains.

Peter Nickles, the city’s interim attorney general, said the quarantine would have “a narrow focus.”

“This is a very targeted program that has been used in other cities,” Nickles told The Examiner. “I’m not worried about the constitutionality of it.”

Others are. Kristopher Baumann, chairman of the D.C. police union and a former lawyer, called the checkpoint proposal “breathtaking.”

Shelley Broderick, president of the D.C.-area American Civil Liberties Union and the dean of the University of the District of Columbia’s law school, said the plan was “cockamamie.”

“I think they tried this in Russia and it failed,” she said. “It’s just our experience in this city that we always end up targeting poor people and people of color, and we treat the kids coming home from choir practice the same as we treat those kids who are selling drugs.”

The proposal has the provisional support of D.C. Councilman Harry “Tommy” Thomas, D-Ward 5, whose ward has become a war zone.

“They’re really going to crack down on what we believe to be a systemic problem with open-air drug markets,” Thomas told The Examiner.

Thomas said, though, that he worried about D.C. “moving towards a police state.”

One thought on “D.C. Neighborhoods Being Targeted for Military-style Police Checkpoints”