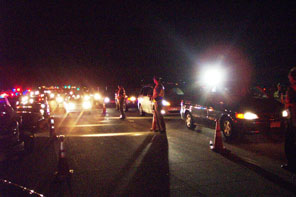 According to the following news release from the Arizona Daily Star, the Tucson Police will be conducting another suspicionless sobriety checkpoint within city limits on Friday – April 25, 2008.

Travelers should be aware that according to Tucson Police Checkpoint guidelines, they are not required to roll down their window or otherwise interact with a stopping officer absent reasonable suspicion. Police will use anything you say against you during these suspicionless stops. Additionally, rolling down your window provides them with an opportunity to inspect the inside of your vehicle for the smell of alcohol or use passive alcohol sensors to detect its presence. This in turn gives them reasonable suspicion for further investigation.

It should be noted that failing to interact with a stopping officer may subject you to additional scrutiny. Checkpoint guidelines indicate a patrol vehicle may be dispatched to follow you for upwards of a mile after you are waived through the checkpoint to look for an excuse to pull you over.

It should also be noted that statistics from across the country show sobriety checkpoints to be far less effective at catching and removing drunk drivers from the road than traditional roving patrols. Instead, these intrusive operations tie up valuable resources for the sole purpose of ‘educating’ the public regarding the dangers of drunk driving. Resources that would otherwise be used to actually remove unsafe drivers from the road at a rate ten times greater than checkpoints.

The money to pay for these intrusive operations originate from the National Highway Traffic Safety Administration through grants administered by the Governor’s Office of Highway Safety. Police departments consider these grants to be ‘free money’ that can be used to reward officers willing to violate your traveling rights with overtime pay.

Additional information regarding suspicionless sobriety checkpoints in Pima County can be found here.

The news release appears below:

The Tucson Police Department is conducting a sobriety checkpoint within city limits Friday night, according to a news release.

The purpose of the DUI checkpoint is to increase awareness about the dangers of drunk driving and to prevent those who have been drinking from getting behind the wheel, the release says.

Previous police checkpoints have been met with public support, according to the release, which doesn’t indicate a particular reason this weekend was chosen for the checkpoint.