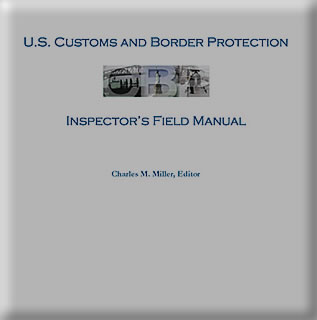 It’s been obvious for years that many of the enforcement techniques being wielded against individuals at suspicionless interior Homeland Security checkpoints have fundamentally violated the rights of the traveling public. Other than the clear language of the 4th Amendment however, the specifics of these violations haven’t been readily apparent – at least until now.

With the recent publication of the Customs & Border Protection Inspector’s Field Manual, these abuses have become abundantly clear. While the manual is geared towards Port of Entry inspections, it also discusses internal checkpoint operations such as those depicted in my videos & explains some of the legal differences between the two types of operations.

The field manual was made public for the first time earlier this year on a website operated by Charles M. Miller, a California immigration attorney. Mr. Miller procured a copy of the manual from Customs & Border Protection after a lengthy FOIA (Freedom of Information Act) battle which lasted close to two years. Not unexpectedly, the agency initially refused to comply with the law. This forced Mr. Miller to appeal the decision which resulted in the agency grudgingly handing over a copy of the document.

Since its posting, I’ve been able to compare the actions of CBP agents at internal suspicionless Homeland Security checkpoints in Southern Arizona with guidance contained within their field manual. This in turn has allowed me to document several discrepancies regarding my experiences at these internal checkpoints.

Several of these discrepancies are highlighted below:

Given the clear limitations contained within the field manual, the use of drug sniffing dogs on all vehicles entering suspicionless checkpoints unlawfully expands the scope of the seizure from a mere immigration check to a search for illegal narcotics. While some will claim the K-9 units are trained to sniff out humans in hidden compartments, the fact of the matter is these dogs are cross-trained to detect marijuana, cocaine, methamphetamine, heroin, and meth-related drugs such as Ecstasy and don’t differentiate between humans and drugs when alerting.

Additionally, a recent article in the Phoenix New Times shows how Homeland Security agents operating checkpoints near Yuma, Arizona have been working closely with the County Sheriff to use suspicionless internal immigration checkpoints to interdict drugs. The joint agreement, known as Operation Citation, has resulted in federal agents being deputized by the County Sheriff to make it easier for them to make drug busts using state powers.

While the above shouldn’t be construed as an exhaustive list of possibly illegal, harassing, and intimidating tactics I’ve experienced at internal suspicionless checkpoints, it’s certainly a good start.

I’ve also been researching the existence of more detailed field manuals that specifically address internal Border Patrol operations but haven’t run across any yet. While such manuals may exist, the bottom line is Border Patrol Agents are acting as Customs and Border Protection inspectors while operating suspicionless internal checkpoints instead of patrolling the border. As such, Border Patrol agents are responsible for not only obeying the law but also abiding by the rules, regulations, and policies of their parent agency, Customs & Border Protection.

While I will continue to research this issue, I hope this entry provides some level of clarity regarding legitimate Homeland Security authority inside the country. Given the obvious disdain for accountability & the rule of law being expressed at every level of the executive branch of the federal government, such clarity is sorely needed in this day and age.