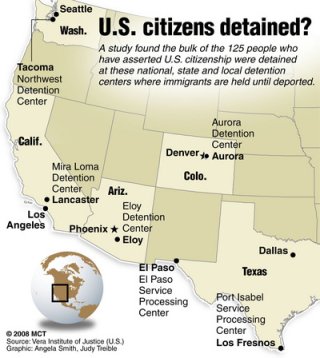 In light of suspicionless Homeland Security checkpoints being conducted in the interior of the country, the story depicted below is especially disturbing.

It appears that well over 100 U.S. Citizens were recently discovered sitting in Homeland Security Detention facilities around the country awaiting deportation orders after being denied access to counsel.

According to the organization that conducted the 2006 study, the 125 individuals idenitifed as having credible claims of U.S. citizenship are most likely just the tip of the iceberg given the huge number of individuals detained every year.

A quote from ICE spokeswoman Kice sums up the current state of affairs:

Now imagine taking a stroll around your neighborhood. Perhaps you’re out walking your dog or just hiking over to the nearest grocery store. Suddenly you’re approached by burly men in green uniforms with guns and federal badges who demand that you prove your citizenship.

I guess that simple question regarding citizenship status being imposed on travelers absent reasonable suspicion in the interior of the country away from any international border isn’t quite so simple after all.

FLORENCE, Ariz. — Thomas Warziniack was born in Minnesota and grew up in Georgia, but immigration authorities pronounced him an illegal immigrant from Russia.

Immigration and Customs Enforcement has held Warziniack for weeks in an Arizona detention facility with the aim of deporting him to a country he’s never seen. His jailers shrugged off Warziniack’s claims that he was an American citizen, even though they could have retrieved his Minnesota birth certificate in minutes and even though a Colorado court had concluded that he was a U.S. citizen a year before it shipped him to Arizona.

On Thursday, Warziniack finally became a free man. Immigration officials released him after his family, who learned about his predicament from McClatchy, produced a birth certificate and after a U.S. senator demanded his release.

“The immigration agents told me they never make mistakes,” Warziniack said in an earlier phone interview from jail. “All I know is that somebody dropped the ball.”

The story of how immigration officials decided that a small-town drifter with a Southern accent was an illegal Russian immigrant illustrates how the federal government mistakenly detains and sometimes deports American citizens.

U.S. citizens who are mistakenly jailed by immigration authorities can get caught up in a nightmarish bureaucratic tangle in which they’re simply not believed.

An unpublished study by the Vera Institute of Justice, a New York nonprofit organization, in 2006 identified 125 people in immigration detention centers across the nation who immigration lawyers believed had valid U.S. citizenship claims.

Vera initially focused on six facilities where most of the cases surfaced. The organization later broadened its analysis to 12 sites and plans to track the outcome of all cases involving citizens.

Nina Siulc, the lead researcher, said she thinks that many more American citizens probably are being erroneously detained or deported every year because her assessment looked at only a small number of those in custody. Each year, about 280,000 people are held on immigration violations at 15 federal detention centers and more than 400 state and local contract facilities nationwide.

Unlike suspects charged in criminal courts, detainees accused of immigration violations don’t have a right to an attorney, and three-quarters of them represent themselves. Less affluent or resourceful U.S. citizens who are detained must try to maneuver on their own through a complicated system.

Officials with ICE, the federal agency that oversees deportations, maintain that such cases are isolated because agents are required to obtain sufficient evidence that someone is an illegal immigrant before making an arrest. However, they don’t track the number of U.S. citizens who are detained or deported.

“We don’t want to detain or deport U.S. citizens,” said Ernestine Fobbs, an ICE spokeswoman. “It’s just not something we do.”

While immigration advocates agree that the agents generally release detainees before deportation in clear-cut cases, they said that ICE sometimes ignores valid assertions of citizenship in the rush to ship out more illegal immigrants.

Proving citizenship is especially difficult for the poor, mentally ill, disabled or anyone who has trouble getting a copy of his or her birth certificate while behind bars.

Pedro Guzman, a mentally disabled U.S. citizen who was born in Los Angeles, was serving a 120-day sentence for trespassing last year when he was shipped off to Mexico. Guzman was found three months later trying to return home. Although federal government attorneys have acknowledged that Guzman was a citizen, ICE spokeswoman Virginia Kice said Thursday that her agency still questions the validity of his birth certificate.

Last March, ICE agents in San Francisco detained Kebin Reyes, a 6-year-old boy who was born in the U.S., for 10 hours after his father was picked up in a sweep. His father says he wasn’t permitted to call relatives who could care for his son, although ICE denies turning down the request.

The attorneys said the chances of mistakes are growing as immigration agents step up sweeps in the country and state and local prisons with less experience in immigration matters screen more criminals on behalf of ICE.

ICE’s Fobbs said agents move as quickly as possible to check stories of people who claim they’re American citizens. But she said that many of the cases involve complex legal arguments, such as whether U.S. citizenship is derived from parents, which an immigration judge has to sort out.

“We have to be careful we don’t release the wrong person,” she said.

In Warziniack’s case, ICE officials appear to have been oblivious to signs that they’d made a serious mistake.

After he was arrested in Colorado on a minor drug charge, Warziniack told probation officials there wild stories about being shot seven times, stabbed twice and bombed four times as a Russian army colonel in Afghanistan, according to court records. He also insisted that he swam ashore to America from a Soviet submarine.

Court officials were skeptical. Not only did his story seem preposterous, but the longtime heroin addict also had a Southern accent and didn’t speak Russian.

Colorado court officials quickly determined his true identity in a national crime database: He was a Minnesota-born man who grew up in Georgia. Before Warziniack was sentenced to prison on the drug charge, his probation officer surmised in a report that he could be mentally ill.

Although it took only minutes for McClatchy to confirm with Minnesota officials that a birth certificate under Warziniack’s name and birth date was on file, Colorado prison officials notified federal authorities that Warziniack was a foreign-born prisoner.

McClatchy also was able to track down Warziniack’s three half-sisters. Even though they hadn’t seen him in almost 20 years, his sisters were willing to vouch for him.

One of them, Missy Dolle, called the detention center repeatedly, until officials there stopped returning her calls. Her brother’s attorney told her that a detainee in Warziniack’s situation often has to wait weeks for results, even if he or she gets a copy of a U.S. birth certificate.

Warziniack, meanwhile, waited impatiently for an opportunity to prove his case. After he contacted the Florence Immigrant and Refugee Rights Project, a group that provides legal advice to immigrants, a local attorney recently agreed to represent him for free.

Dolle and her husband, Keith, a retired sheriff’s deputy in Mecklenburg County, N.C., flew to Arizona from their Charlotte home to attend her brother’s hearing before an immigration judge.

Before she left, she e-mailed Sen. Richard Burr, R-N.C. After someone from his office contacted ICE, immigration officials promised to release Warziniack if they got a birth certificate.

After scrambling to get a power of attorney to obtain their brother’s birth certificate, the sisters succeeded in getting a copy the day before the hearing.

On Thursday, however, government lawyers told an immigration judge during a deportation hearing that they needed a week to verify the authenticity of Warziniack’s birth record. The judge delayed his ruling.

“I still can’t believe this is happening in America,” Dolle said.

Warziniack began to weep when he saw his sister. “They still don’t believe me,” he said.

Later that day, however, ICE officials changed their minds and said that he could be released this week. They said they were able to confirm his birth certificate, but they didn’t acknowledge any problem with the handling of the case.

The officials blamed conflicting information for the mix-up.

“The burden of proof is on the individual to show they’re legally entitled to be in the United States,” said ICE spokeswoman Kice.

Warziniack, 40, told McClatchy that he has no memory of telling anyone he was Russian. Instead, he recalled the shock of withdrawing from his heroin addiction after 18 years of drug abuse.

Katherine Sanguinetti, a spokeswoman for the Colorado Department of Corrections, suspects that prison officials were relying on information that Warziniack gave when he was first taken into custody because they never received the Colorado court documents concluding that he was a U.S. citizen.

Even now, the prison records inaccurately show his current location as “the Soviet Union.”

In the end, Sanguinetti said, ICE is responsible for making sure that it detains and deports the correct person. Her prisons flag hundreds of prisoners a month as foreign-born, but can’t possibly verify the information, she said.

“Could it happen again? Sure,” Sanguinetti said. “But we would hope that ICE during their investigative process would discover the truth.”

Rachel Rosenbloom, an attorney at the Center for Human Rights and International Justice at Boston College who’s identified at least seven U.S. citizens whom ICE has mistakenly deported since 2000, believes that the agency should set up a more formal way of handling detainees when they appear to have valid claims of U.S. citizenship. At the very least, she said, ICE could release people such as Warziniack on bond while waiting for immigration judges to hear the cases.

“It’s like finding innocent people on death row,” Rosenbloom said. “There may be only a small number of cases, but when you find them you want to do everything in your power to make sure they get out.”