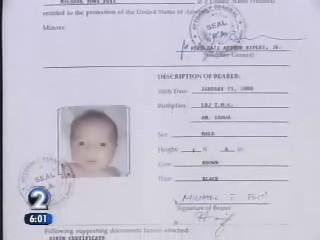 As DHS continues to wage its war on the right to travel, horror stories like the one appearing below will become increasingly common place. The question to ask is how much are decent Americans willing to put up with before putting an end to this…unique interpretation of ‘serving’ and ‘protecting’ being foisted upon us by an out-of-control Department of Homeland Security.

In the articles appearing below, so-called Customs and Border Protection Agents seized a 14 day old infant at the Honolulu airport along with the child’s mother and a nurse traveling with the family. The three individuals were placed into a customs detention room while overzealous agents attempted to verify their papers. What the agents apparently ignored during the process was that the infant was being flown to a Honolulu hospital for emergency heart surgery.

While Homeland Security agents continued detaining the infant and his mother for an extended period of time, the child died in the customs holding room.

I guess such life (and death) situations weren’t explicitly covered in the inspector’s field manual.

This sort of abuse of discretion makes me sick to my stomach. What about you?

It looks like a lawsuit is in the works but the Federal Torts Claim Act requires that a Notice of Claim be filed first which gives the government several months to respond. You can be sure that unless a lot of political pressure is brought to bear, the official story will be that the agents did nothing wrong and all proper procedures were followed.

Get ready folks. This is just one of the many unintended consequences you can expect in the near future from empowering government to regulate every aspect of your life.

Links to several articles covering this story appear below:

PAGO PAGO, American Samoa » American Samoa’s Democratic delegate to Congress has joined with the ranking Republican on the House Homeland Security Committee in calling for investigation into the death of a baby at Honolulu Airport.

Delegate Eni Faleomavaega and U.S. Rep. Peter T. King of New York separately requested that Homeland Security investigate the death of 14-day-old Michael Tony Futi on Feb. 9 while the infant, his mother and a nurse were being held by U.S. Customs and Border Protection agents.

The baby had been flown to Honolulu for emergency heart surgery. He died while detained inside a customs room at the Honolulu Airport with his mother and nurse.

“This appears to be a terrible tragedy, and my heart goes out to the family,” King said Friday. He said customs agents are charged with “keeping our country secure, and I have a great deal of respect for the job that they do, but this entire matter must be fully investigated.”

Faleomavaega called for the probe in a letter to Homeland Security chief Michael Chertoff.

“According to the family, the group was detained by CBP because of issues dealing with travel documentation,” Faleomavaega wrote.

He said there are many issues and questions regarding the “seriousness of Michael’s death and whether this tragedy could have been prevented.”

On Thursday, territorial Rep. Archie Soliai called on House Speaker Savali Talavou Ale for the territorial government to find out what happened to the infant.

“This incident makes me very worried about the rights of our people in the future,” Soliai said on the House floor.

Territorial Sen. Tuaolo M. Fruean questioned whether LBJ Medical Center in American Samoa, where the infant was being treated, had taken all necessary precautions to ensure he was well taken care of prior to arrival in Honolulu.

He said he also was concerned with the lack of an LBJ representative waiting for patients from American Samoa at the Honolulu Airport, which he said has been the practice in past years.

LBJ Medical Center general counsel Terry Lovelace said the hospital did everything properly, adding that the infant “was taken to Hawaii as soon as he was stable enough for transfer.”

The boy’s father, Tony Futi, said he was still in shock over “our miracle baby.” He said he and his wife didn’t think they could have more children.

He said they adopted a son, who is now 3 years old, and they have two other children, a 14-year-old son and a 13-year-old daughter.

Futi said all papers including the visa waiver were in order for his wife when they left for Honolulu. He said his wife, a citizen of Samoa, has lived in American Samoa for 16 years.

He said when his son left “he was strong and had a lot of will and we prayed for him every night when he stayed at the (LBJ) hospital.”

Michael Tony Futi had a hole in his heart and needed surgery, a surgery that could not be done in American Samoa according to the family’s attorney.

Michael was was born on January 25th.

“At this time her feelings for her son and for the things that have happened she’s sad, she’s heartbroken,” said Simamao Nofoa, a family friend who interpreted for Futi.

It wasn’t supposed to be this way. The trip to Hawaii was supposed to help save his life. Fried says trouble for the Futi’s began as soon as they got off the plane. And were detained by customs agents.

“After about thirty minutes in this warm locked room the baby starts to have problems with his oxygen,” said Rick Fried, who is representing the family.

Fried says by the time medical help arrived at the airport it was too late.

“So if we add the times up we have a delay of probably an hour of when this baby should have left the airport,” he said.

Fried says customs agents had some sort of problem with the mother’s identification. I.D. he says was in order, as was the medical request which is frequently used by anyone seeking medical attention.

Meanwhile a confused mom wonders what would have happened had officials let her go from the airport in a timely manner. “If they would have let them come out immediately her baby would still be here,” Futi said through her interpreter.

Attempts to reach a contact with u-s customs and border protection were unsuccessful.

Fried says the federal government now has six months to investigate before a lawsuit can be filed.

One thought on “Overzealous CBP Agents Cause Death of Infant”