As the video above shows, I was seized yet again by Homeland Security agents at a suspicionless federal checkpoint in Southern Arizona on January 20, 2008. This checkpoint, the same one I’ve been stopped at twice before in the past two weeks, is located near mile post 146 on Arizona State Route 86, over forty miles North of the Southern border.

For those who think the term seizure is too harsh, let me point out that the U.S. Supreme Court has consistently held that all checkpoint stops are seizures:

A person is seized within the meaning of the Fourth Amendment when by means of physical force or show of authority his freedom of movement is restrained, and in the circumstances surrounding the incident, a reasonable person would believe that he was not free to leave.

As such, these highway chats with Homeland Security agents are much more serious than many would like you to believe.

What’s taking place is not a voluntary roadside exchange with well-intentioned law enforcement officers looking out for your safety and security. Rather, these federal agents have temporarily seized your person and property absent a judicial warrant for the sole purpose of conducting an investigation where you are the primary suspect. This despite the fact that no reasonable suspicion exists at the time of the seizure.

Indeed, the whole purpose of the exercise is to create reasonable suspicion by visually searching your vehicle at the same time you are being visually inspected and interrogated regarding your citizenship status.

It was exactly this type of arbitrary enforcement activity utilized by British officials in the form of general warrants or writs of assistance that the Bill of Rights was written to protect us against.

Instead, these enforcement techniques are quickly becoming the mainstay of the modern American police state – despite the fact interior checkpoints have no discernible impact on the level of illegal traffic in the country and are less effective than border operations.

Don’t believe me? Checkout the number of individuals the INS testified were in the country illegally in 1976. Then compare that number to current reports. Next, consider the fact that the Border Patrol and its budget has grown by more than a factor of ten since 1976 along with vast improvements in technology such as remote sensors, unmanned drones, virtual walls, etc. Yet still the level of illegal traffic has remained steady, if not increased.

Consider for instance the following points:

In other words, there’s no compelling reason to conduct interior suspicionless checkpoints against the traveling public – unless of course one prefers to look good rather than feel good. Interior checkpoints are little more than dog and pony shows designed to entertain the masses while having no discernible impact on the problem they were allegedly created to address.

Getting back to the checkpoint stop in question, I was traveling home from work on January 20th when I was stopped and seized by a Homeland Security Agent at the checkpoint: 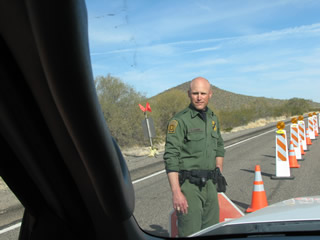 The agent initially demanded that I roll down the driver’s side window even though he had no legitimate basis to do so. The agent then accused me of veering towards him while I entered the checkpoint and creating a hazard.

One of the reasons I videotape these encounters is so that everything is well documented and the facts are not easily distorted. A review of the video shows the agent’s claim to be baseless. In fact, it’s clear from the video the agent felt comfortable enough with my distance from him that he didn’t even shift his position as I came to a stop next to him. My vehicle was well centered in the lane of traffic and my speed was at all times appropriate for the conditions.

As far as creating a hazard is concerned, you can see this sequence of speed limit signs coming into the checkpoint to determine who has created the traffic hazard:

After gaining no traction with his baseless claim, he then began demanding my citizenship after refusing to verify his own identity. This continued for a short while until he made it clear he intended to detain me while seeking guidance from a nearby supervisor. The supervisor motioned for the agent to send me through however and I left the checkpoint shortly thereafter.

As I continued my interrupted travels back to Tucson, I began thinking that if the stated goal of the Department of Homeland Security really was to stop illegal border traffic, how much traffic had the department allowed to cross unchallenged forty miles due South of my location over the past two weeks because Border agents were more interested in harassing travelers in the interior of the country than actually patrolling the border.