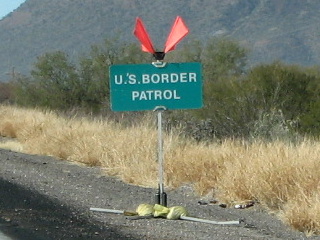 As indicated in my earlier post, the Homeland Security Checkpoint was up and running for a second day near mile marker 146 on Southern Arizona’s State Route 86 as I drove back to Tucson. I arrived at the checkpoint and videotaped the encounter shortly after 4:00 pm:

Unlike my previous encounter, the federal agent who stopped me took one look at my camera and waved me through without asking any questions.

I guess knowing my citizenship today wasn’t nearly as important to national security as it was yesterday.

Another difference I noted today was that the stopping agent was wearing a legible name tag this time. This has been a problem in the past because Homeland Security agents seem to be of the opinion they don’t need to identify themselves to the public. Of course the name tag appears to be attached with velcro which means it’s easy to remove and replace with any name the agent chooses to use on any particular day. 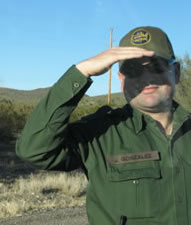 The occupants of the vehicle get out shortly thereafter while the agents show a fair amount of interest in them along with the bed of the truck. I suppose the agents were hoping to find illegal aliens or narcotics but instead only found roofing supplies, shingles and other tools of the trade.

I know this because I observed the truck’s occupants working off and on most of the day repairing several roofs damaged by a recent wind storm on a nearby mountaintop. The only reason the truck and its occupants were cherry-picked out of the flow of traffic by federal agents and given an extra special dose of Homeland Security love was because they looked and sounded hispanic.

This of course shows one of the fundamental failures of suspicionless immigration checkpoints in the interior of the country. It’s mostly arbitrary guesswork. As such, Border Patrol agents have little more than racial profiling to go on to decide who gets the full treatment and who just gets harassed.

As one Tucson Sector Border Patrol supervisor told me several years ago, the Border Patrol doesn’t keep records of the number of stops agents make that don’t result in a seizure. This means there’s no objective criteria to determine how effective any given operation is, how effective any particular agent may be, or how many individuals are being wrongfully targeted and harassed by overzealous federal agents.

Finally, I note how interesting it is to see how checkpoint operations change when agents know they’re being recorded. This is ultimately what vigilance against government misconduct is all about.

I don’t know when the next time I’ll be traveling this route will be but it wont be that far in the future. As such, I’ll continue to document every encounter I have at this or future checkpoint operations.

Exposing the police state, one checkpoint at a time….