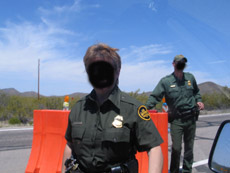 Well, it looks like the Department of Homeland Stupidity is at it again.

Employees of the department have always acted geographically challenged and today would be no exception. While driving Westbound along Arizona State Route 86 near mile marker 146, I came upon a suspicionless federal checkpoint that appears to be manned by Border Patrol agents employed by Homeland Security. Since this area is well over forty miles North of the international border, it would appear that these so-called “Border Patrol” agents still haven’t figured out where the actual border is.

Instead of using a GPS unit to help them find the border however (a great place to be if you actually want to patrol it), these agents have instead chosen to harass the traveling public well inside the country along a State Highway absent any reasonable suspicion of wrongdoing. Of course this location is much closer to local convenience stores than the border which may explain the decision to locate the checkpoint where it is.

When I drove by, the checkpoint included several Homeland Security patrol vehicles along with at least two trailers and a portable generator for high intensity lights to be used at night. Cones were setup along the highway directing Eastbound traffic off the road and to a stop. At the time I drove by, at least four agents were visible to the South side of the road but no Eastbound traffic was present at the time.

Anyway, I’ll be traveling back along this route later today. Since Eastbound traffic is being profiled, I fully expect that I’ll be stopped & harassed. I already have video and photos taken earlier today and will be recording any interaction I have with federal agents if I’m stopped. An update will be posted with footage when the opportunity arises.

In the meantime, you can follow the links below regarding other checkpoint experiences I’ve had along this section of the road over the past few years:

It should be noted in case a question should arise at a later date:

“I refuse to consent to any search whatsoever. As such, I do not consent to a search of my premises, my person, my immediate location or any vehicle or effects. I will exercise my rights as enumerated by the Fourth, Fifth, Sixth, Ninth, and Fourteenth Amendments to the United States Constitution in a peaceful and non-threatening manner if stopped and confronted by any federal agent or State empowered law enforcement officer. I will also demand to have an attorney present prior to and throughout any questioning.”