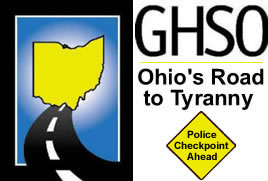 Last night I came across an article by The Newspaper, highlighting a story out of Summit County, Ohio regarding sobriety checkpoints and a local county sheriff.

In a breath of fresh air, Summit County Sheriff Drew Alexander admitted sobriety checkpoints are far less effective at removing drunk drivers from the road than traditional policing methods that rely upon reasonable suspicion to justify a stop. The Sheriff then went on to state he believes such suspicionless checkpoints are a violation of the spirit of the 4th Amendment.

Just when I was starting to think Alexander was a sheriff with integrity however, I discovered he wasn’t nearly so willing to put his convictions into practice when federal bribes amounting to $175,000 were on the line.

Instead, Alexander applied for and received a federal grant from the so-called National Highway Traffic Safety Administration through Ohio’s Governor’s Highway Safety Office (GHSO). Although Alexander wrangled with the state regarding how many ineffective and unconstitutional checkpoints his department would have to conduct in order to receive the money, he eventually accepted the bribe on the condition he would operate no less than four such checkpoints over the course of the upcoming year.

As is the case in Arizona, the federal funds accepted by Alexander will primarily be used to incentivize local deputies to violate their oath of office by offering time and a half in overtime pay to conduct suspicionless roadblocks against the traveling public.

As is also the case in Arizona, the DUI arrest rate at these suspicionless checkpoint operations fall well below the 1% level. In comparison, the DUI arrest rate associated with roving patrols is five to ten times greater. This means that per unit man-hour, sobriety checkpoints will result in five to ten times more drunk drivers remaining on the road than would be the case if the same deputies spent their time on patrol instead. So much for public safety being the main purpose for conducting sobriety checkpoints.

Regardless, this annoying fact hasn’t stopped bureaucrats at the Governor’s Highway Safety Office from pushing for even more suspicionless police state intrusions into the lives of law-abiding individuals. In the last year alone, the number of drivers seized at suspicionless Ohio checkpoints increased 72% to just under 118,000 drivers. 99.7% of these drivers were found to be sober after being interrogated by local jackboots.

Given the nature of sobriety checkpoints, isn’t it past time we put an end to these highly intrusive enforcement regimes?

While Sheriff Alexander’s admission that checkpoints are ineffective and unconstitutional is certainly a step in the right direction, it’s not nearly enough. By definition, any county sheriff or politician who rationalizes the use of these enforcement practices in exchange for a few pieces of silver from their federal handlers isn’t fit to hold public office and should be removed with all due haste.

Both articles referenced in this entry appear below:

Ohio Bribes Sheriff to Set Up Roadblocks
Summit County, Ohio sheriff believes roadblocks ineffective and unconstitutional but sets them up in return for $175,000 in DUI grants.

The Summit County, Ohio sheriff believes roadblocks are unconstitutional and ineffective in fighting drunk driving — except when the roadblocks come with cash. Sheriff Drew Alexander will accept $175,000 in state grants, usually paid for with federal gas tax dollars, that the state will only offer to law enforcement agencies that agree to set up roadblocks. The Akron Beacon Journal newspaper asked Alexander if he thought roadblocks violated the Fourth Amendment.

“I do,” Sheriff Alexander responded.

Roadblocks are becoming more and more frequent in Ohio. Last year 68,656 motorists suspected of no wrongdoing were stopped and interrogated. In just the first eleven months of this year, 117,858 innocent motorists were detained. The Journal cited Ohio statistics that showed traditional police patrols catch drunk drivers five times more effectively than roadblocks. The Pennsylvania Supreme Court similarly found that 99.3 percent of those stopped at roadblocks were completely innocent and that it took 53 percent more manpower to effect an arrest at a roadblock than with the less-intrusive roaming patrols.

Sheriff Alexander expects to have the first DUI roadblock running by December 20.

Alexander plans to do minimum, then use rest of funds for patrols

By Bob Dyer
Beacon Journal columnist
Published on Friday, Nov 30, 2007
Summit County’s top cop got into a staredown with the state – and the state blinked.

Sheriff Drew Alexander is not a big fan of sobriety checkpoints. For one thing, he thinks they are much less effective than roving patrols.

But he likes the idea of Summit County getting a bundle of extra money to fight drunken driving, so he applied for a state grant to fund another Summit County OVI Task Force.

Unlike last year’s task force, which ran 16 checkpoints in its final nine months, Alexander made a proposal to stage the minimum annual number required – four – and use the rest of the money to pay officers to cruise the streets and look for drivers who are exhibiting signs of impairment.

The state didn’t like that. The state loves sobriety checkpoints – at least the people in the Governor’s Highway Safety Office. Those folks have been passing along federal checkpoint money faster than
politicians handing out campaign literature.

So the GHSO initially indicated that Summit would not get a grant because Alexander wouldn’t run enough checkpoints. Higher-ups in state government apparently stepped in and prevailed.

Alexander expects to get about $175,000 to run the program through Oct. 1. Summit County would have gotten about $200,000, but the county is getting off to a late start because Reminderville Police Chief Jeff Buck, who had agreed to run the show for two years, unexpectedly quit after one.

The money goes primarily to off-duty cops from dozens of Summit County agencies who are paid time-and-a-half for their voluntary overtime.

Alexander was negotiating from a position of strength. With no other Summit law-enforcement agency stepping forward, the state could not have run checkpoints here without the various municipalities signing mutual aid agreements. Can you imagine Akron signing a mutual-aid pact with Reminderville?

According to the state’s own stats, roving patrols are five times more effective than checkpoints, which have been catching less than one-third of one percent of the drivers stopped.

But if checkpoints are used, at least they should be set up during the hours when the most dangerous drunks are on the road. As we pointed out in an earlier column, Buck’s group had banker’s hours. While the greatest number of alcohol-related fatalities take place between midnight and 3 a.m., only two of his 16 checkpoints stayed open as late as 2 a.m. The bars don’t even close until 2:30.

The sheriff said he will consult with his deputies and other law-enforcement agencies as to the precise schedules, but vowed that every checkpoint would encompass the hours between midnight and 3 a.m.

Summit’s next checkpoint could be set up in time for the holiday drinking season. If the paperwork arrives from Columbus in time, Alexander said, he would like to have something in place by about Dec. 20.

For lots of folks, the issue is not timing but constitutionality. Many of us believe that sobriety checkpoints violate the Fourth Amendment – regardless of what a divided U.S. Supreme Court ruled in 1990.

On that controversial issue, you might expect Alexander to invoke another amendment – the Fifth. But when asked whether he thinks sobriety checkpoints violate the spirit of the Fourth Amendment, he answers quickly and succinctly.

If this guy isn’t more careful, MADD is going to take him off its Christmas list.