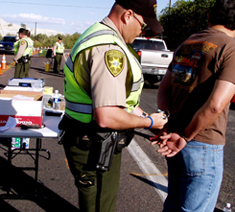 In what appears to be an increasingly common theme across the country, yet another police officer has been discovered making false DUI arrests.

In this case, Sergeant Jim Crain, formerly of the Corvallis Police Department in Oregon, resigned after evidence surfaced that a large percentage of his DUI arrests appear to be based on fabricated evidence and pre-written police reports. Sergeant Crain had previously been named DUI Enforcement Officer of the Year.

Why this story is of interest to me is that it further illustrates the corruption associated with DUI enforcement across the country. If a veteran police officer is able and willing to fabricate evidence to create the illusion of reasonable suspicion during a traffic stop, consider how much easier it is to fabricate evidence at suspicionless ‘sobriety’ checkpoints where cops stop drivers absent any reasonable suspicion whatsoever.

How many of these arrests were made by cops just trying to justify their existence, or validate checkpoint operations?

Given the fact that some cops routinely fabricate evidence to support enforcement activity to begin with, sobriety checkpoints make it that much easier by removing the 4th Amendment requirement that reasonable suspicion exist before stopping and interrogating you.

Those who support suspicionless checkpoint operations have forgotten that one of the original intents of the 4th amendment was to protect the people against corrupt government officials. The article below makes it clear that such corruption is alive and well in the world of DUI enforcement:

A sober man wants justice after he was arrested for driving under the influence of alcohol (DUI) by one of the most productive Corvallis, Oregon police officers. David E. Picray notified the city on August 30 that he was considering filing suit for false arrest, as reported by the Corvallis Gazette-Times newspaper.

On May 11, Picray had gone to a bar to pick up his wife and friends. While parked, his wife sent him a text message that they had moved to a bar a block away, so Picray drove a bit closer to the second bar, stopping his car in a store parking lot. When Picray left the car, Officer Dave Cox, who had been staking out area bars, confronted him. Cox suggested that Picray’s driving such a short distance was suspicious.

Cox wrote in his report that the motorist had “bloodshot and glassy” eyes and that his tongue had a “light green coating.” The motorist had a cold and was chewing gum. The motorist blew 0.0 on a breathalyzer test and a drug test confirmed that his system was clean, aside from a trace amount of codeine from cold medicine taken the previous day. Although Picray was not charged with a DUI offense, the arrest will stay on his record.

“An arrest for traffic is not expungeable,” Corvallis defense attorney Jennifer Nash told the Corvallis Gazette-Times newspaper. “So when innocent people are arrested there is actual damage.”

Picray was not the only sober motorist arrested by Cox in May. At least six of 27 motorists arrested by Cox for DUI that month passed drug testing and registered blood alcohol levels below the legal limit. Nonetheless, twenty-two of the arrest reports contained passages essentially identical to those in Picray’s report describing “bloodshot and glassy” eyes and other alleged indicators of intoxication.

“The (prewritten) report tells the officer what he should have seen — not what he actually saw,” Taylor wrote. “And as any honest cop will tell you, drunk driving cases rarely follow such a neat, pre-described script. But it is convenient. And avoids messy complications — like the actual facts.”

Corvallis police put Cox on paid leave on September 14 and he resigned November 1. Sergeant Jim Crain was put on leave October 18. Cox made 27 of the 35 DUI arrests for Corvallis in May and was named DUI Enforcement Officer of the Year in 2003.

“I believe this is part of a larger problem with the Corvallis police,” Dr Adam Schultz, a resident, wrote in a letter to the mayor. “Is it not true that the police officers attempt to maximize their performance-related pay reviews, and that the number of citations is a key metric? Isn’t this the perfect condition for a conflict-of-interest, i.e. rather than measuring performance through improvement in road safety, instead doesn’t this encourage spurious citations?”