So I’m driving back to Tucson along SR-86 near mile marker 140 in Southern Arizona this past Friday, minding my own business, when I look in my side-view mirror only to see a silver four door sedan tailgating me.

Figuring the guy was in a hurry, I gradually slowed down from the posted 65 mph speed limit to allow the driver ample opportunity to safely pass me on the left. Even though the other lane was clear and several vehicles took advantage of the opportunity to pass both of us, the driver chose to continue tailgating me for the next ten miles.

As we got closer to Three Points, Arizona, the driver finally began initiating a pass. As he pulled into the adjacent lane, I could make out red and blue enforcement lights (that were off) embedded in the front grill of the vehicle. This made it clear I had just been tailgated for ten miles by an unmarked ‘law’ enforcement vehicle.

After passing, the agent pulled in front of me and slammed on his brakes while he was still working his way back into the East-bound travel lane (see animated gif above). This extremely unsafe maneuver placed me in imminent danger of a collision and forced me to apply my brakes to avoid hitting the police cruiser.

After pulling in front of me, the agent continued to brake and then swerved onto the Southern shoulder.

After I passed him while he was on the side of the road, I looked in the side mirror again to see what he was doing. The vehicle remained stationary for several seconds before pulling back into the lane of traffic behind me.

The agent then proceeded to tail me along SR-86 into Tucson for the next twenty miles. He followed me onto I-10 and stayed behind me for another ten miles on the interstate highway. At no point during this hour+ long encounter did the agent ever signal me to pull over. Instead, he just took up station behind me and followed for an extended distance:

In all, the unmarked police interceptor followed me for well over 40 miles according to area maps I referenced after the fact.

Just to be clear as to what happened, let me recap:

An unmarked police interceptor tailgated at an unsafe distance for several miles along a two lane highway before suddenly speeding up and passing me on the left. While pulling in front of me, the agent applied his brakes and nearly caused a collision. He then swerved onto the Southern shoulder and came to a complete stop before re-entering the traffic pattern behind me. The agent then followed me for an additional 30 miles back into Tucson and onto an interstate highway.

In the animated gif above, I placed boxes around the vehicle’s center brake light in each frame. This makes it easy for the viewer to see when the agent applied his brakes. As such, it’s readily apparent the brakes were applied sometime between frame four and five at a point when the interceptor had passed me but before it fully crossed back over the center lane. It was at this point that I had to brake in order to avoid a possible collision with the police interceptor.

Since the photos are out of focus, the interceptor’s license plate is not readily readable. I was however able to find a photo of what appears to be the same vehicle taken earlier this year along the same stretch of highway. 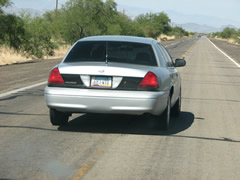 the license plate is clearly visible:

along with the ‘Police Interceptor’ logo to the left of the license plate:

Why this particular agent targeted me for this form of police harassment is unclear although I can hazard a guess.

Having driven this route on a regular basis for well over a decade, I’ve increasingly seen this form of police behavior from both Customs and Border Protection agents and local police.

I’ve been told that this type of police activity is part of a behavioral profiling paradigm whereby enforcement agents target a vehicle at random to see how a driver and any passengers respond to the heightened level of scrutiny. The agent then makes a subjective determination on whether or not any particular response provides ‘reasonable suspicion’ to justify a traffic stop and even more scrutiny.

In my case, it’s likely the agent saw my vehicle camera system as he was passing and realized his actions were being recorded. Not being used to seeing the individuals who pay his salary through taxes also scrutinizing his behavior, he may have initially freaked out.

Realizing that vehicle cameras systems don’t represent reasonable suspicion and not wanting to initiate an unlawful stop that would be recorded by that same camera system, the agent then decided to just harass me by following at a close distance until he could either justify a reason to pull me over or until he got bored with the whole charade.

Or the agent realized, after running my license plate, that I’m the same guy whose been documenting the abuses of local and federal police along this stretch of highway for several years now and just decided this was a good opportunity for harassment in general.

Either way, the agent’s actions were irresponsible, unjustified and placed several people at risk. The encounter also shows a pervasive police attitude that increasingly treats everyone as suspects and attempts to create the perception of reasonable suspicion out of thin air instead of responding to incidents where probable cause actually exists.

As such, until law enforcement is held to the same level of accountability the rest of us are, these types of abuses will continue to proliferate.