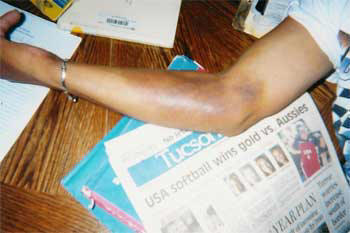 A story recently published in the Arizona Daily Star caught my attention the other night. Titled, “Blood draws by officers in DUI stops questioned“, the article indicates a recent victim of this barbaric police practice has filed a Notice of Claim with the Pima County Sheriff’s Department.

The claim references a persistent blood infection, centered around the needle entry point, that still exists months after being forced to endure a blood draw by a minimally trained sheriff’s deputy during a traffic stop under unsafe and unclean environmental conditions. A Notice of Claim is the first step necessary in order for an individual to file suit against a government official/agency in Arizona.

This practice of forcing individuals to submit to blood draws during DUI investigations is nothing new for the Pima County Sheriff’s Department. A few years ago, a deputy tortured a man who initially refused to allow a blood draw by tasering him on the back of the neck. The man eventually submitted to the blood draw but during litigation, the Sheriff’s Department was forced to drop all charges against him and change its taser policy to prohibit their use to coerce blood draws in the future.

Additionally, at least one Tucson law firm has posted information regarding this barbaric police practice along with supporting legal documentation. A photo provided on Charnesky & Dieglio’s website shows the damage one individual suffered as a result of a coerced police blood draw by a minimally trained deputy.

The Newspaper has also published information about this practice in the past, including information regarding a recent Minnesota Appeals Court ruling that decided against local police in a coerced blood draw incident.

While many folks feel this issue doesn’t affect them because they never drink and drive, this would be an incorrect assumption. Given the proliferation of suspicionless sobriety checkpoints across Arizona, everyone is now at risk.

Case in point, the Pima County Sheriff’s Department has conducted approximately 80 suspicionless sobriety checkpoints over the past two years. During these checkpoint operations, over 50,000 individuals have been stopped absent reasonable suspicion or probable cause of wrongdoing. Of these 50,000 individuals, over 1,200 have been forced to take field sobriety tests but only 300 or so have been arrested for DUI. Of these 300 arrests, only 80 have been successfully prosecuted. This means that of the 1,200 people initially suspected of DUI, over 93% were innocent. If we include everyone stopped at Pima County sobriety checkpoints over the past two years, this number increases to a 99.7% innocence rate.

As such, it doesn’t take a rocket scientist to realize that sheriff’s deputies are forcing innocent individuals to undergo intrusive and dangerous blood draws by minimally trained non-medical enforcement personnel under threat of losing their drivers license for over a year.

Such police state enforcement tactics shouldn’t be confused with ‘serving’ and ‘protecting’ local communities. They’re nothing more than excuses to dominate, intimidate and control the traveling public and shouldn’t be suffered by a free people.

Other articles I’ve written regarding suspicionless checkpoints and their statistics can be found at:

Attorneys are putting new scrutiny on a practice that has become common among law enforcement: having officers, not medical personnel, draw blood with syringes in suspected drunken driving cases.

That comes after a man developed a persistent infection at the site of a blood draw administered by a Pima County sheriff’s deputy. He has filed what is believed to be the first claim in Arizona against the practice, which could put local taxpayers on the hook for any damages.

Arizona law requires that drunken driving suspects submit to a test or lose their license for a year, and it’s the officer’s choice, not the driver’s, whether to use a breath or a blood test.

Law enforcement agencies say having officers do blood draws themselves is quicker and more convenient than going to a hospital and more accurate than a breath test.

But defense attorneys have zeroed in on the practice, arguing police officers do not receive adequate training to do the blood draws, don’t have the health and safety of suspects as their top priority and put suspects at unnecessary risk.

They have succeeded in getting blood evidence tossed out of court and charges against their clients dismissed based on the fact that it was a law enforcement officer, not medical personnel, who took the sample.

Now the man who believes an officer-administered blood draw caused his persistent infection has filed a claim against Pima County and the Pima County Sheriff’s Department. A claim is the first step in a lawsuit.

“I think most of the public does not realize that law enforcement personnel are doing the draws,” said Michael Bloom, an attorney in the case.

He said the practice raises several concerns, including that

According to the claim, James Green, a 31-year-old test pilot who works out of Pinal Air Park, was stopped by a sheriff’s deputy March 27 and arrested on suspicion of driving under the influence. After being told his driver’s license would be suspended for 12 months if he did not consent to a blood test, he agreed to allow the draw.

Even though they were within walking distance of Northwest Medical Center, the deputy performed the blood draw in the back seat of his squad car. It took two tries to get a sample.

The claim says Green’s arm became swollen and very red around the site of the blood draw within a few hours. Five months later, he had undergone several rounds of treatment with antibiotics and still had the infection. The claim says Green can work only intermittently because of the infection and may face long-term health consequences.

James Charnesky, Green’s lawyer in his criminal case, is working with Bloom on the civil case. He succeeded in getting charges dropped after arguing that the way the blood was drawn violated Green’s due-process rights. Even though Green is seeking $500,000 in damages, Charnesky said the motivation behind the lawsuit is to change the practice.

Charnesky, who specializes in DUI cases, said the practice started in Arizona but now is spreading to some counties in Utah and Texas.

Lt. Karl Woolridge, the Sheriff’s Department Special Operations commander, said deputies do blood draws because blood is more accurate than breath, and the closer to the time of the crime the evidence is collected, the more accurate it is.

“Our goal is to have fewer cases go to trial because we have better evidence,” he said.

The Sheriff’s Department does not track conviction rates, and the deputy county attorney who oversees DUI prosecutions could not be reached for comment.

Other metro-area police departments have officers trained to draw blood but still use breath tests, depending on the situation.

Woolridge said Green’s claim doesn’t tell the whole story, but he could not comment on the specifics because of the likelihood of a lawsuit.

He said it was the first claim he was aware of related to a blood draw done by a deputy, and he said it wasn’t surprising that eventually someone would complain. “Imagine the total number of blood draws we do,” he said. “We make 1,800 DUI arrests a year.”

DUI defense attorneys have convinced judges to throw out blood evidence by arguing deputies threatened suspects with electric stun guns to get them to submit to a blood draw, police officers used too much force to restrain a suspect for a blood draw, officers drew blood while suspects were standing, or officers with limited experience went ahead with a blood draw even though a hospital was just a few minutes away.

In 2004, charges were dropped against a man facing misdemeanor DUI charges after he said deputies used a stun gun against him three times to force him to submit to a blood draw. He said he was afraid of needles.

The Sheriff’s Department has since changed its Taser policy.

While having police officers do their own draws is now common in Pima County, medical experts expressed surprise at the practice.

The medical director of the American Red Cross Arizona Region Blood Services said she had never heard of such a practice, and it raised several concerns.

Phlebotomists who practice in a medical center get more training, and then more practice, before working on their own, she said.

“To be a really good phlebotomist, you need to do a lot of draws,” she said. “The more draws you do, the better you’ll be at it.”

Also, if the arm isn’t positioned properly or if the person is standing, there would be a greater risk of injury both to the person submitting to the draw and to the person administering it, Miller said.

Arizona has no state requirements or licensing process for phlebotomists. The Red Cross training calls for one week of classroom instruction, then two weeks of practice with a trained phlebotomist observing each blood draw. The curriculum endorsed by the National Phlebotomy Association calls for nine weeks of training.

The course for law enforcement officers, developed at Phoenix College and now offered at Pima Community College, lasts a week and includes two days of practice in a clinical setting.