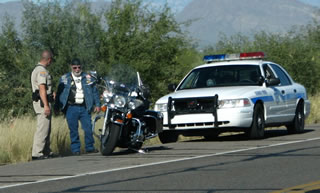 After following a few links the other night, I came across this biker’s blog linking to a news article published by the North Country Gazette in East Fishkill, New York.

The article highlights a so-called motorcycle safety checkpoint that was conducted along Interstate I-84 on October 7, 2007 by the New York State Police, the Dutchess County Sheriff’s Office, the Kent Police Dept., the East Fishkill Police Department and the Dept. of Motor Vehicles Field Investigations Unit.

While the stated purpose of the checkpoint was to increase motorcycle safety, it’s clear from reading the article, the operation was just another suspicionless dragnet fishing expedition designed to specifically target the biking public. It should also be noted the article referenced a seatbelt checkpoint being coordinated with the motorcycle checkpoint at the same time and in the same geographic area.

The U.S. Supreme Court has made abundantly clear that in order for a suspicionless checkpoint to be considered legal, it must treat all drivers the same. Either all vehicles must be stopped or a pattern must be established and adhered to such as stopping every third vehicle. Any deviation, especially one that targets a specific subset of the traveling public, is prima-facia evidence that the checkpoint is unconstitutional.

Additionally, the primary purpose of a ‘lawful’ checkpoint must be related to an issue affecting the immediate safety of the traveling public such as removing drunk drivers from the road. In this case, cops were looking for stolen or modified motorcycles by checking VIN numbers along with demanding to see licenses. These issues, as well as several others used as justification for the checkpoint, have nothing to do with the immediate safety of the traveling public. As such, individualized suspicion is required before such checks can legally take place. That didn’t happen in this case which means the checkpoint was illegal. Anyone cited would have cause to legally challenge the citation and seek an injunction against future such abuses.

Once a motorcycle was flagged out of the flow of traffic and into a nearby rest stop, enforcers looked for the following violations:

Any motorcycle that either didn’t see the checkpoint or ignored the signs, was chased down by a police helicopter that was also looking for speeding violations along with patrol vehicles posted in the vicinity of the operation. In all, 280 motorcycles were processed through the checkpoint and 104 violations were written.

It should be noted that even though local and state enforcement agencies conducted this suspicionless checkpoint, the funding almost certainly came from a federal agency.

The National Highway Traffic Safety Administration, or NHTSA, has been responsible for proliferating these egregious violations of the 4th amendment across the country. They do so by funding suspicionless roadblocks through state agencies that re-distribute the money to local enforcers willing to violate the traveling rights of the local communities they allegedly ‘serve’ and ‘protect’. For years, the NHTSA has been pumping up the rhetoric regarding motorcycles in particular and many of the bulleted points used in the article as justification for the roadblock can be found almost verbatim on the NHTSA’s website.

Anyone interested in fighting these unconstitutional violations of their traveling rights, should start getting organized at the local level. Information needs to be gathered at the local, state, and federal level via Open records and FOIA requests to the agencies conducting and funding these checkpoint programs. Specifically, folks should seek copies of the Checkpoint Guidelines that every agency MUST legally have in place (but most times don’t) before conducting a checkpoint along with operational plans, funding contracts/grants, operational statistics, etc.

While considering the statistics referenced below, keep in mind that the federal agency responsible for generating these statistics has a known history of artificially inflating the facts to promote the adoption of nanny state policies, including suspicionless checkpoints, across the country.

The text of the article that prompted this post appears below:

EAST FISHKILL: Some 280 motorcyclists were stopped during a motorcycle safety checkpoint Sunday, Oct. 7 on Interstate 84 in Dutchess County by the New York State Police, in conjunction with local police and the NYS Department of Motor Vehicles Field Investigations Unit. A total of 104 summons were issued for safety and equipment violations, with the most common being unapproved helmets. The safety checkpoint was conducted at the eastbound rest area on Interstate 84 in the Town of East Fishkill, approximately two miles east of the Taconic State Parkway.

The purpose of the checkpoint, which ran from 10 a.m. to 2 p.m., was to increase motorcycle safety by insuring compliance with applicable Vehicle & Traffic Laws.

Reasons for this growing problem include:

At the checkpoint, which was modeled after a commercial vehicle checkpoint, motorcyclists were directed into the rest area where state and local police and DMV investigators conducted inspections for proper licenses, safety helmets, exhaust systems and other safety and regulatory violations. Also participating in the operation were the Dutchess County Sheriff Office, the Town of Kent and Town of East Fishkill Police Departments.

In addition, the State Police conducted an aerial speed enforcement operation nearby, which in addition to identifying speeding vehicles, was positioned in order to assist ground patrols in the event that a motorcyclists attempted to evade the inspection area. Although no motorcyclists intentionally attempted to avoid the checkpoint, 18 cyclists failed to observe the signs directing them to enter the rest area. All 18 motorcycles were stopped by a Trooper operating a Camaro patrol car and escorted back to the checkpoint.

Enforcement data that resulted from this operation includes:

Of the 64 tickets issued to motorcyclists at the inspection site, 41 were for unapproved helmets, 7 for illegal exhaust systems, 3 for unlicensed operation and 13 other various violations.

In addition to the traffic violations noted above, the DMV investigators identified three custom motorcycles that had non-conforming Vehicle Identification Numbers. The operators of these motorcycles will be required to appear at a DMV Field Office with their motorcycles for a more comprehensive investigation.

The State Police expect to expand this program statewide in the summer of 2008.