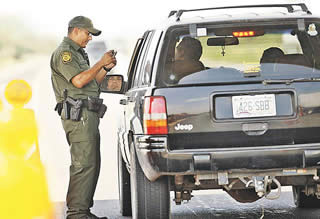 The controversy surrounding a proposed permanent Homeland Security checkpoint in Southern Arizona continues to grow as people begin to understand the true costs associated with such an installation. For background information, I first reported on this proposed checkpoint on July 6, 2007.

On September 18, 2007, the Tucson Citizen reported that the Pima County Board of Supervisors used especially strong language in unanimously opposing the proposed installation along I-19 in Southern Arizona.

Despite the board’s vote along with a growing public backlash, DHS intends to push forward with plans to construct the facility over forty miles North of the border along a heavily traveled public highway anyway. This despite the existence of the Nogales Port of Entry, forty miles due South of the proposed location, which has failed to stem the tide of illegal aliens and narcotics for as long as the facility’s been in existence.

DHS officials have also failed to explain why the department hasn’t made a dent in the level of corruption and incompetence plaguing its agencies at all levels. Instead, the department appears to be relying on a gullible public to fail to understand that one definition of insanity is to continue doing the same thing over and over again while expecting a different result.

Isn’t it time to re-evaluate and overhaul the federal government’s failed immigration and drug policies instead of doing the same thing over and over again to the detriment of individual rights and our financial well-being?