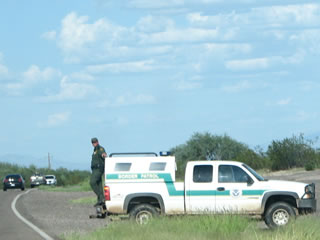 Unlike last month, August showed a marked increase in Border Patrol profiling activity along Southern Arizona’s State Route 86. In fact, these so-called Border Protection agents could be seen using cameras to spy on unsuspecting occupants of vehicles along a state highway forty miles North of the border: 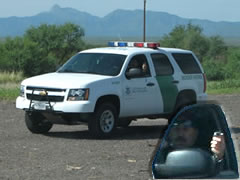 Additionally, Homeland Security agents were observed standing on the tailgate of federal patrol vehicles backed up to the edge of oncoming traffic in an attempt to illicit reactions from the occupants of passing vehicles and for closer views of vehicle interiors: 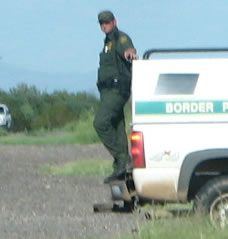 These ‘tailgate profilers’, positioned close to the lane of oncoming traffic, evaluate the reaction of vehicle occupants. If anyone responds ‘suspiciously’, the profiler signals a patrol vehicle further down the road to pull the vehicle over and interrogate the occupants

The Border Patrol calls this enforcement technique ‘behavioral profiling’ which isn’t much different from racial profiling in practice. In addition to noting the physical characteristics of vehicle occupants, these Homeland Security profilers make other subjective determinations. Some of these include whether or not individuals make too much or too little eye contact with them or otherwise look ‘suspicious’ in their appearance or response to federal profilers stationed along the side of the road.

Agents also consider whether or not the vehicle being driven is a type of vehicle used more often than others to smuggle drugs or transport illegal aliens. All of this highly subjective criteria is used by the profiling agent to decide whether or not to seize vehicle occupants for an up-close and personal roadside interrogation: 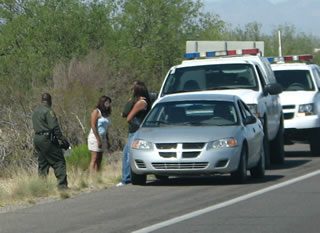 On the day most of these photographs were taken, three additional Border Patrol vehicles were observed along the South side of the road spaced approximately two miles apart from one another. Unmarked enforcement vehicles were also patrolling the area and one such vehicle made a bee-line for me after a federal agent who was profiling me as I drove by noted I was photographing him: 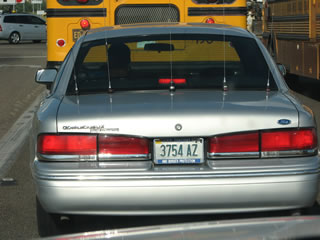 This particular unmarked Customs & Border Protection vehicle tailgated me for about ten miles or so before passing as we got closer to town.

I guess this is what passes for Border Security these days by the Department of Fatherland Security. Suspicionless profiling of Americans in the interior of the country along State highways that never come close to the border.

Do you feel safer yet?