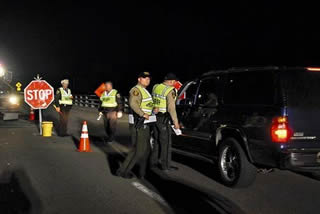 The article below was originally published by the Arizona Daily Star on August 26, 2007.

Of special note are the numbers showing sheriff deputies have been paid over $140,000 in overtime from federal grants to conduct DUI roadblocks and that less than half of those arrested at these roadblocks have actually been convicted. Since the arrest rate is already abysmally low at 0.6%, the conviction rate for all motorists needlessly harassed over the past two years is less than 0.3%.

Given the obvious ineffectiveness of these checkpoint regimes, it’s important to point out that our right to travel and our right to be free from unreasonable search and seizure are being violated so that cops can earn overtime pay from their federal handlers.

An important question to consider is how many accidents or deaths have been caused by drunk drivers who weren’t taken off the streets, based upon probable cause, because cops were too busy harassing 46,000+ responsible drivers at suspicionless roadblocks across the county….

With this in mind, I think it’s well past time to put an end to these ridiculous incursions on individual rights by those who should be protecting us instead of intimidating and harassing us. More information about the Pima County Sheriff Department sobriety checkpoint regime can be found here:

Now on to the article:

Pima County sobriety checkpoints have netted a tiny number of DUI arrests despite stopping tens of thousands of drivers since 2005, an Arizona Daily Star investigation has found.

Since the Sheriff’s Department began staging checkpoints nearly two years ago, overriding authorities’ previous concerns that the stops yielded few arrests, fewer than 1 percent of the more than 46,000 drivers stopped have been arrested on suspicion of DUI.

And fewer than half of those arrested have been convicted.

Even with the low arrest rates, proponents defend the checkpoints, saying they deter drunken driving by educating people about its dangers. Every person deputies stop receives anti-drunken-driving pamphlets, which they say means one more person who may avoid driving under the influence.

Still, the number of DUI arrests has remained constant since the stops were reinstituted in September 2005 after a 10-year hiatus. In other words, it doesn’t appear fewer drivers are driving while drunk.

“It’s a good sign that we’ve arrested so few people,” Sheriff’s Lt. Karl Woolridge, who supervises the agency’s special operations, including checkpoints, said when presented with the Star’s findings. “At least we’ve removed nearly 300 impaired drivers off the road.”

But critics of the checkpoints, including defense attorneys and civil libertarians, question their effectiveness and legality. They say police have more sure-fire methods for spotting drunken drivers, such as concentrated patrols.

The Sheriff’s Department has spent more than $140,000, mostly in federal and state money, on 63 staffed checkpoints though May.

DUI checkpoints force drivers to stop and talk with a deputy, who asks them if they’ve consumed alcohol or taken drugs. Depending on the driver’s answer, the deputy will inspect the driver for bloodshot eyes, alcohol-tinged breath and other telltale signs of impairment.

How effective those procedures are, and to what degree critics say they constitute an unreasonable search and seizure, is up for debate.

Checkpoints are “feel-good measures that are costly,” said Alessandra Soler Meetze, executive director of the American Civil Liberties Union of Arizona. “It gives the impression that they’re reducing the amount of drunk driving, but it doesn’t seem to be the case.”

As Independence Day neared its close this summer, sheriff’s deputies at a Southwest Side DUI checkpoint had spent more than two hours stopping cars on West Valencia Road near South Westover Avenue.

The lines of vehicles, sometimes more than a dozen deep, rolled by as deputies repeated a familiar line: “Good evening. Have you consumed any alcohol or drugs today?”

The answer, by and large, was “no.” But for the few who said “yes” or looked suspicious, deputies asked the driver to pull into the median and perform a field-sobriety test.

Between September 2005 and May 2007, the Sheriff’s Department conducted 1,168 such tests at DUI checkpoints, records show. That means that for every four drivers who were screened, deputies arrested one.

One of those tested that July 4 night was a woman in her 20s who registered 0.119 percent blood-alcohol level on a Breathalyzer, above the state’s 0.08 percent DUI level.

In the back seat sat two minors drinking beer, the remnants of a 24-pack between them.

“Yeah,” said Woolridge as he observed the woman. “This is why we do checkpoints.”

Still, at this stop, the unidentified woman was one of only three DUI suspects, the Sheriff’s Department reported. From 9:15 p.m. to 12:15 a.m., deputies counted 1,239 cars that passed through, an arrest rate of less than one-tenth of 1 percent. Thirteen deputies staffed that checkpoint.

Such low rates, critics say, are why authorities should be shifting tactics.

Police officers are well-trained in how to spot drunken drivers, “and then they just stop everyone who’s driving along,” said Joe St. Louis, a local attorney who specializes in drunken-driving cases, including some that began at checkpoints.

“It’s just crazy. If you stop people at random, it’s not an efficient use of your time or of taxpayer dollars,” he said. Such random stops, critics argue, just waste the time of sober drivers and law enforcement.

While it’s hard to say just how effective DUI checkpoints are compared with other enforcement methods, statistics show that their educational component is also debatable: DUI arrests have remained relatively constant each month since they began in September 2005.

The department stopped DUI checkpoints in the mid-’90s amid concerns of low arrest rates, Woolridge said. But after sheriff’s officials examined studies that showed checkpoints have a deterrent effect, the department restarted the program.

The Arizona Daily Star reviewed court cases of those arrested at the checkpoints from September 2005 through May 2007 and compared the data with checkpoint statistics from the Sheriff’s Department. The newspaper obtained the list of checkpoint arrests through a public-records request in June.

Among the Star’s findings:

● Sheriff’s officials counted 46,781 drivers who went through the checkpoints, most of whom were not arrested or even tested for being impaired.

● Of those drivers who were stopped, deputies arrested 282 on suspicion of drunken driving. That accounts for 0.6 percent of all drivers who went through the checkpoints.

● Of the 180 DUI cases that have been through the courts, 105 have been dismissed. Defense lawyers point to weak evidence, such as a lack of reasonable suspicion, and constitutional violations as reasons why, although they say each case is different.

● While deputies were able to stop drivers who were perhaps the most egregious offenders, they also snagged some who were far below the DUI level. Still, Arizona law prohibits drivers from getting behind the wheel if they’re impaired to the slightest degree.

● Although most of the arrests or citations at checkpoints were DUI-related, more than 100 were not. Citations ranged from possession of marijuana to driving on a suspended license.

Outcomes in 22 cases couldn’t be determined because corresponding court records couldn’t be found despite an extensive search. The Sheriff’s Department also could not find records in those cases.

5 to 30 deputies can staff a checkpoint, statistics show, with a few sergeants at each checkpoint, too. 6 to 12 sheriff’s volunteers assist the officers, Woolridge said.

In the last two years, the agency has spent about $142,000 on overtime pay for checkpoints, data show. If divided up yearly, that accounts for a sizable amount of the funds from the National Highway Traffic Safety Administration and the state, according to a calculation of budget figures.

About $120,000 of the federal money given to Arizona went to the Sheriff’s Department in fiscal 2007 to help pay for deputies’ overtime at checkpoints and DUI patrols, said Michael Hegarty, the deputy director of the Governor’s Office of Highway Safety. The state gives the money to Pima County, which then divvies it up to local agencies, including the Sheriff’s Department.

Among the checkpoints with the most deputies was one conducted during Labor Day weekend in 2005. Records show 27 deputies staffed the checkpoint for more than three hours, netting four arrests at North La Cholla Boulevard and West Ruthrauff Road out of 571 drivers who passed through.

But to some DUI-checkpoint proponents, hassles for so many sober drivers are worth it even if the stops cause delays.

“Inconvenience is a way of life,” said Kelly Larkin, executive director of the Tucson affiliate of Mothers Against Drunk Driving. Even if the cases against drivers get dismissed, she said, “It got them off the streets that night.”

Pal Ham approached the DUI checkpoint on West Picture Rocks Road near Saguaro National Park West on Sept. 4, 2006. Before he got behind the wheel, he’d had a few beers, three to be exact, he said.

Deputies arrested Ham, 74, on a drunken-driving charge, court records show. He pleaded guilty after blowing a 0.105 percent blood-alcohol content, and said he spent a night in jail.

To this date, he has mixed feelings about the checkpoints.

“I could get along without them,” he said, “until one of my loved ones gets killed.”

Ham’s case epitomizes why checkpoints are worth the time, proponents say.

Still, the most widely cited alternative to sobriety checkpoints are “saturation patrols,” which increase the number of police officers on the streets to look for drunken drivers.

Thus, lawyers and checkpoint critics say, defendants have more evidence against them as officers can observe more telltale signs of impairment, such as weaving or stopping at a green light.

Some agencies, including the Tucson Police Department, have stopped conducting checkpoints, a spokesman said, but he could not elaborate.

Nonetheless, Hegarty, the Governor’s Office of Highway Safety official, said a DUI checkpoint is “not about arresting; it’s about having a presence and educating the community.”

Here and in other states, authorities plan to continue using checkpoints as part of their arsenal against drunken driving.

In fact, state and local officials are planning a crackdown on drunken driving this Labor Day weekend that will include a checkpoint in Pima County.

One professor who has studied the effectiveness of DUI checkpoints said his results show that checkpoints were associated with a 20 percent reduction in drunken-driving crashes in the Maryland-Virginia-Washington, D.C., area.

But that’s only “if they are done often enough and publicized,” said Kenneth H. Beck, a professor of public and community health at the University of Maryland. “Otherwise, they’re not likely to get the deterrent effect.”

Today, Beck said, checkpoints are much more common nationwide. But of the more than 1.5 million people who are arrested for drinking and driving each year, he said, “far more are arrested outside of checkpoints.”

The question of such checkpoints’ effectiveness, then, comes down to perspective.

“One of the arguments is that there is a general public-awareness factor,” said Roger Hartley, an associate professor of public administration and policy at the University of Arizona’s Eller College of Management.

“But if it was worth the cost, they’d do it all the time.”

Compare how effective various DUI checkpoints have been over the past two years in an interactive map at www.azstarnet.com/crime.

The Legislature changed Arizona’s DUI blood-alcohol content from 0.10 percent to 0.08 percent in September 2001. The new law was prompted partly by a 2000 federal law that withholds some highway money to states that have not adopted the lower limit.

Officers will be on special weekend DUI enforcement details Labor Day weekend, the Pima County Sheriff’s Department said, which will include sobriety checkpoints and saturation patrols. The enforcement is part of a national anti-DUI campaign that began in mid-August.

Other blog entries regarding the Pima County Sheriff Department Suspicionless Checkpoint Regime are available at: