A quick search online verified the existence of the checkpoint regime via a press release from the San Bernardino County Sheriff in late May. The press release described the operation as a joint task force involving the following agencies:

Similarly, the County Fire Department reported the Fireworks Interdiction Joint Task Force as also including agents from the County Department of Forestry and Fire Protection and indicated the operation was active between April and July 4, 2007.

A local newspaper also reported on a fireworks checkpoint conducted on June 29, 2007. The article indicated the checkpoint had been setup along a winding mountain road leaving traffic backed up for over a mile during its operation.

With this background information, I listened to David Champion’s discussion of one man’s experience at a fireworks checkpoints in early June.

It seems that task force agents weren’t just stopping vehicles and making inquiries. They were taking it much further and demanding to search vehicles absent reasonable suspicion of wrongdoing and threatening drivers, who refused to allow their vehicles to be searched, with unlawful enforcement action.

Since full discussion of the incident includes excerpts from three separate shows, I condensed the archives down to include just the sections dealing with the roadblock incident:

The archived shows in their entirety are available on the American Radio website at:

While the radio host did a good job of discussing many of the issues surrounding suspicionless checkpoints in general, there are a few additional issues that should also be examined.

The United State Supreme Court has only explicitly authorized 4th amendment loopholes in the form of suspicionless checkpoints in the following two scenarios:

The Supreme Court also explicitly limited the scope of suspicionless checkpoints in City of Indianapolis vs Edmund after striking down a checkpoint program primarily designed to interdict illegal drugs. In the ruling, the majority stated:

“But if this case were to rest at such a high level of generality, there would be little check on the authorities ability to construct roadblocks for almost any conceivable law enforcement purpose. The checkpoint program is also not justified by the severe and intractable nature of the drug problem.”

The general philosophy the Supreme Court has brought to bear in these cases is that as long a checkpoint program serves an immediate public safety concern, is limited in scope, has written departmental guidelines, and is not setup for general crime control purposes, it is permissible under the 4th amendment.

While I strongly disagree with this philosophy in general and consider the 4th amendment an absolute bar against ALL suspicionless checkpoint operations, these cases nonetheless define the current boundaries of checkpoint law.

As such, it should be readily apparent that even within the permissive guidelines laid out by the U.S. Supreme Court, the fireworks checkpoint program described above is fundamentally illegal in nature. This is so because interdicting fireworks primarily serves general crime control interests. Transporting illegal fireworks, just like transporting illegal drugs, is not an act that impairs the driver so there is no immediate public safety concern at play.

While San Bernardino County may have more restrictive laws then the rest of the State, this does not authorize the county to setup suspicionless checkpoints designed to intimidate and harass the traveling public into surrendering their fundamental right to be free from unreasonable search and seizure.

Even if these firework checkpoints could ultimately be justified under the guise of ‘public safety’, the actions of Deputy Mahon, as described in the American Radio archives, fall well outside legal boundaries. Enforcement agents cannot, under any circumstances, legally search an individual or a place without individualized reasonable suspicion or non-coerced consent.

I would also be willing to bet that the San Bernardino County Sheriff’s Department failed to develop written departmental guidelines regarding firework checkpoint operations. The Supreme Court has indicated such guidelines are a requirement for any constitutionally permissible checkpoint program. As such, any concerned county resident should make an Open Records request to the sheriff’s department for a copy of their guidelines. If the sheriff fails to provide them, this would be grounds for a lawsuit demanding an immediate injunction against further checkpoint operations.

In the end, such actions only serve as a stop gap measure for slowing down the ever-encroaching police state however. Stopping and reversing it will require the active participation of a critical mass of individuals who refuse to give any further ground to those who would rule us as opposed to govern within constitutionally permissible limits. 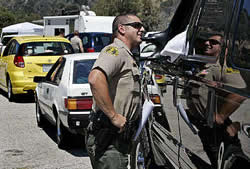